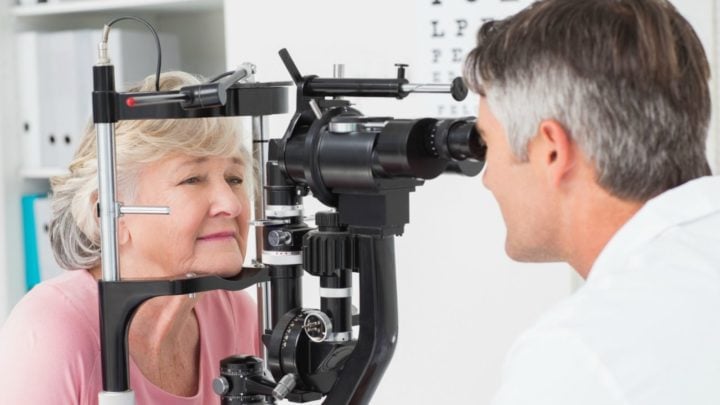 Alzheimer's disease is the most common type of dementia and a new eye test could predict a person's risk years before they show symptoms. Source: Shutterstock (stock image used)

Alzheimer’s disease is the most common type of dementia globally and while there’s currently no cure for the irreversible and progressive brain disorder, researchers now believe they’ve developed an eye test that can predict those who are most at risk of developing the memory-robbing disease. Alzheimer’s begins to alter and damage the brain decades before symptoms appear and early diagnosis is key to slowing its progression.

Medication is currently available which can provide temporary improvement in cognitive functioning in those with mild and moderate forms of Alzheimer’s, while other drugs can be prescribed to assist with other symptoms such as restlessness or mental health problems. Therefore, if diagnosed earlier, these medications could help at a much earlier stage.

Now, researchers from the University of California in San Diego believe that measuring how quickly a person’s pupil dilates when they take a cognitive test may be a low-cost and low-invasive way to test people who are at an increased genetic risk of Alzheimer’s before they begin experiencing cognitive decline.

The study, published in the Neurobiology of Aging Journal, explained that researchers investigating the pathology of Alzheimer’s have been focusing on two major causative and contributory factors of the disease. The first is the accumulation of a protein plaque in the brain called amyloid-beta and the second is tangles of a protein called tau. Both have been linked to damaging and killing neurons in the brain which results in cognitive dysfunction.

For the latest research, experts focused on how the eyes’ pupils responded to specific neurons in the brain known as locus coeruleus that are involved in cognitive function. The tau protein is the earliest known biomarker for Alzheimer’s disease and first appears in the locus coeruleus. It’s also more strongly associated with cognition than amyloid-beta.

Researchers discovered that the locus coeruleus causes the eyes’ pupils to change diameter during cognitive tasks and a person’s pupils get bigger when a brain task is more difficult. It follows a previous study which found adults with mild cognitive impairment (which is often a precursor to Alzheimer’s) also displayed greater pupil dilation than people without cognitive issues. The latest study has also linked pupillary dilation responses with Alzheimer’s disease risk genes.

The latest study comes just months after Australian researchers developed another non-invasive and cost-effective test that could change the way Alzheimer’s is detected. The eye scans – which are based on imaging technology similar to that used in NASA satellites – works by using specialised colour imaging in cameras to measure the deposition of amyloid beta in the retina many years before symptoms even occur. This particular protein is known to accumulate in the brain of someone with Alzheimer’s and recent research found it also exists in the retina.

The test’s co-creator Associate Professor van Peter van Wijngaarden said at the time that the approach has the potential to revolutionise the diagnosis of the disease. He also claimed it could accelerate research efforts to delay, prevent or even cure the disease, as scientists take a more targeted and less invasive approach to testing new drugs and treatments for those most at risk.

“We hope to develop a simple, non-invasive test that can identify people at risk of the disease and open the way to new treatments and hopefully a cure,” van Wijngaarden explained. “Current tests for Alzheimer’s disease are expensive and invasive. Not only are they out of the financial reach of most health care systems, their cost and limited availability make the testing of new treatments much more difficult, slowing down the pace of discovery.”

There is currently no one test that can diagnose Alzheimer’s disease and a diagnosis is only made after careful clinical consultation. Tests including MRIs, PETs, psychiatric assessment, blood and urine tests and neuropsychological tests help eliminate other health conditions with similar symptoms, but a diagnosis can only truly be confirmed by examining brain tissue when a person has passed away.

If you or a loved one are experiencing any symptoms such as memory problems, loss of enthusiasm, difficulty performing daily tasks and a decline in social skills, always talk to a health professional.