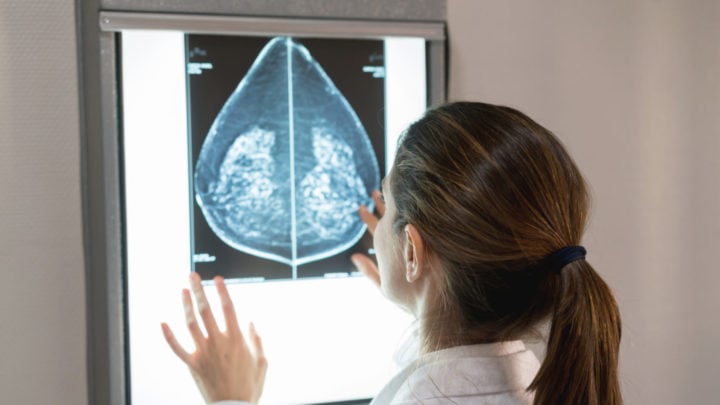 A new study has claimed taking menopause hormone therapy medication can increase the risk of developing breast cancer for years after usage has stopped. Source: Getty

The use of menopause hormone therapy has been linked with a concerning risk of breast cancer, with a new international study revealing effects of the treatment could be felt for more than a decade after use stops.

HRT for menopause (MHT) is often used by women throughout Australia when menopause symptoms such as hot flushes start to occur, in a bid to reduce discomfort and make the process easier on the body. However the new findings, published in The Lancet, found almost all types of MHT – except topical vaginal oestrogens – are associated with increased risk of developing breast cancer, with oestrogen-progestagen hormone therapy proving more concerning than oestrogen only hormone therapy.

Although women are urged not to stay on the treatment for long periods of time, with an average of five years use, the new collation of data from more than 100,000 women with breast cancer from 58 studies across the world has revealed even being on the medication for less than a few years increases risk of cancer. Not only that, the risks remain high for 15 years after a woman has stopped taking the medication altogether – although the likeliness of developing breast cancer was lower than women still using the medication.

Advisor to the Cancer Council and co-author of the study, Professor Emily Banks, explained while the news isn’t good for women across the world, it is important people are aware of the risks and think hard about their options to manage menopause symptoms before beginning on the medication. “HRT should only be used in moderate and severe cases of menopausal symptoms for less than one year and not as a prevention of disease,” she explained to Starts at 60. “Women need to be fully informed so they can weigh up the risks. If they choose to go ahead with HRT it needs to be as short of a time as possible.”

Banks continued by explaining that the process of menopause actually reduces the risks of breast cancer, with the chances of developing the disease slowing during this period. It is for this reason the co-author said adding hormones after menopause isn’t beneficial for women.

As part of the study, researchers brought together and re-analysed studies from 1992 to 2018 that had recorded MHT use and then monitored breast cancer incidence, with 108,647 women subsequently developing breast cancer at an average of 65 years old. Among these women who developed the disease, half had used MHT.

While the risk of developing breast cancer from ages 50 to 69 in those who had never used MHT was about 6.30 per 100 women (about 63 in every 1,000 women), data showed it was much higher in women who had undergone the treatment. According to researchers, 8.3 per 100 users of oestrogen plus daily progestagen users would develop the disease, compared to 7.7 in 100 using oestrogen plus intermittent progestagen and 6.8 per 100 in taking oestrogen-only.

Unlike previous studies, it was revealed there was also an increased risk in breast cancer in the 15 years after use had stopped. The extent of this risk was also dependent on how long the medication had been taken for. However, for short use of MHT of under a year, there was little risk at all of receiving a breast cancer diagnosis.

Co-author Professor Valerie Beral from the University of Oxford claimed while many may believe the MHT is appropriate to help them through menopause, women need to be wary of the risks associated with use. “Our new findings indicate that some increased risk persists even after stopping use of menopausal hormone therapy,” she explained. “Previous estimates of risks associated with use of menopausal hormone therapy are approximately doubled by the inclusion of the persistent risk after use of the hormones ceases.”

However, thankfully, there is one option for women, as there was little recorded risk of developing breast cancer with the use of vaginal oestrogens that are applied locally as creams or pessaries and do not reach the blood stream.

The news that MHT increases risk of breast cancer is not new, with Cancer Council NSW previously undertaking its own research on the matter with data mirroring the recent study. Researchers found those who are using MHT are at double the risk of being diagnosed with breast cancer than women who never use the medication. It was revealed women who use oestrogen-only therapy for around five years, have a 20 per cent increase in the risk of developing breast cancer, while use for 10 years jumped to a 30 per cent risk.

This was especially concerning for women across Australia with 500,000 taking MHT in the country in 2015. This added up to 12 per cent of women aged 40 to 65 with the majority having been taking the medication for longer than five years.

Have you ever or are you currently taking menopause hormone therapy? Do you know anyone who has developed breast cancer after undergoing this treatment?