HPV can be detected decades before throat cancer diagnosis: Study 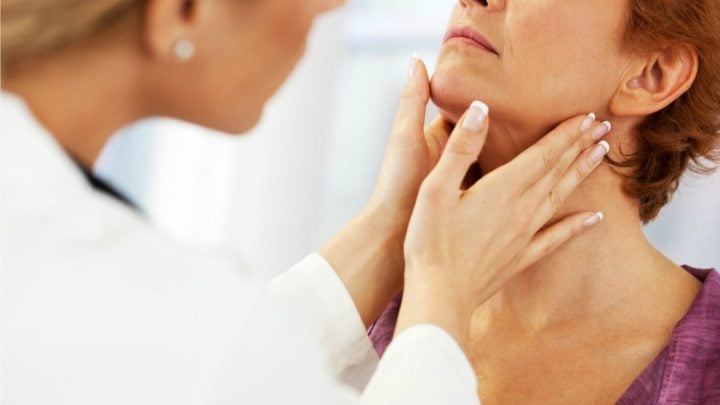 There's currently no cure for HPV-related throat cancer but researchers believe the infection can actually be detected years before a diagnosis. Source: Getty

Cases of throat cancer caused by the Human Papillomavirus (HPV) have increased dramatically since the 1980s and according to new research, the infection that causes the cancer can be detected up to four decades before a person is diagnosed.

HPV – which is a common and highly contagious sexually transmitted infection also associated with cancer of the anus, vagina, cervix, vulva and penis – is one of the leading causes of OPSCC throat cancer.

Research published in the Annals of Oncology Journal shows that antibodies (cells used by the immune system to neutralise bacteria and viruses) to the HPV-16 virus can be detected between six and 40 years before a person is diagnosed with cancer.

Around 70 per cent of OPSCC cases in the USA are attributable to HPV16, while it’s similar in some European countries and other locations around the world.

“Importantly, the proportion of throat cancers caused by HPV16 has been increasing over the past few decades, particularly in men, and in some countries the overwhelming majority are now caused by the virus,” lead researcher Mattias Johansson said in a statement.

Researchers noted that investigating how early antibodies develop before a cancer diagnosis is important in understanding how long a person is at risk. It also gives scientists insight into the history of the disease.

“In this study we found that antibodies can, in some cases, develop several decades prior to diagnosis of cancer,” Johansson said. “If rates of throat cancer continue to rise in the future, this biomarker could provide one means to identify individuals at very high risk of the disease who may benefit from specific preventive measures.”

Researchers analysed 743 patients with throat cancer and compared them with 5,814 people without cancer in a control group. All patients provided a blood sample years before any cancer diagnosis, which researchers tested for antibodies against the HPV16 cancer-causing protein.

The antibodies were detected in just 22 people in the control group, but in 26.2 per cent of throat cancer patients.

“We also found that people diagnosed in more recent calendar years were more likely to have HPV antibodies, which is consistent with what we know about the increase in the proportion of throat cancers that are due to HPV16,” first author Aimée Kreimer said. “Although there were some people with HPV antibodies detected prior to 1995, this was relatively rare.”

HPV antibodies were more common in people between 40 and 80 and the median age they were detected was at 52. The median age of a OPSCC diagnosis was 62.

There’s currently no evidence-based way to test for OPSCC before symptoms appear and researchers acknowledge that more research needs to be done before HPV16 antibodies can be used as an effective detection method.

“Although HPV16 antibodies could be a way to identify people at very high risk of cancer, we are currently missing the critical next steps in the screening process,” Johansson said. “Also, even though the antibody marker was very good at discriminating between those who would develop cancer and the controls who would not, with such a rare cancer, many people would still be likely to have a false-positive results.”

Researchers added that there’s “a long way to go” before this biomarker is used and that vaccination against HPV is a strong way of preventing HPV-related cancers. It is believed changes in sexual practices and a reduction in tonsillectomy is behind the rise in throat cancer cases.

Do you know somebody who’s been impacted by throat cancer? Are you concerned that the infection could be detected years before a cancer diagnosis?