Put the burger down: Shocking new report finds 67 per cent of Aussies are obese 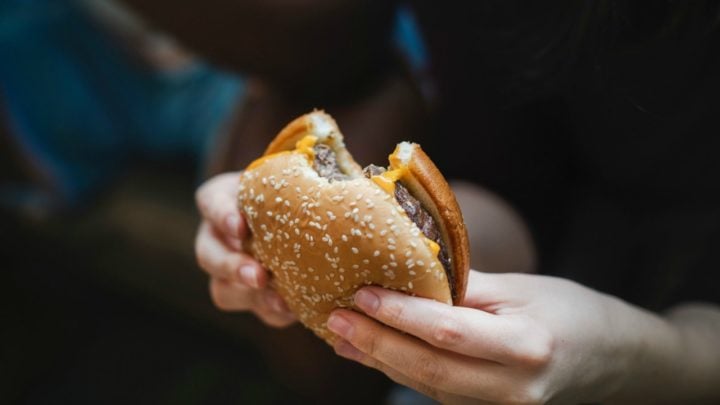 Obesity is a driver for 22 diseases, with around 4,000 cancer cases each year caused by being overweight and obesity. Source: Pexels

Most over-60s are aware that being obese can increase the risk of serious health conditions including heart disease, stroke, high blood pressure, diabetes and cancer, but a new report has revealed that obesity is still a growing problem in Australia.

In fact, the Weighing in: Australia’s growing obesity epidemic report by the Collective for Action on Obesity found two thirds of adults, or 67 per cent, are either overweight or living with obesity. Shocking stats released on Wednesday also reveal that there are 900,000 more people living with obesity in 2019 than there were just three years ago. These figures do not include people who are simply overweight.

Obesity numbers have also doubled from 2.7 million to 5.8 million in just 10 years. Experts predict that if the current growth rate continues, 40 per cent of Aussie adults will be living with obesity within a decade.

These alarming stats have resulted in more than 100 organisations forming the Obesity Collective to launch a new campaign to tackle the weight problem. Experts fear obesity figures may get so bad that putting preventative measures into place won’t be enough to reduce obesity numbers.

“We are fast heading down the road the United States has travelled and they have discovered exactly how much it costs in terms of health and taxpayer dollars,” Annette Schmiede, founding member of Collective for Action on Obesity, said in a statement.

The number of Australian adults overweight or with obesity has DOUBLED in the last decade! pic.twitter.com/1JSjFvrb3E

Her calls were echoed by Stephen Simpson, Executive Director of Obesity Australia, who said obesity needs to be made a national health priority.

“The notion that 40 per cent of Australians will live with obesity in 10 years is shocking,” he said. “Obesity needs to be a national priority if we’re going to turn this around.”

The report also found obesity in Australia costs around $11.8 billion each year, including $5.4 billion in direct health costs and $6.4 billion in indirect costs. And while obesity is impacting a large proportion of the adult population, experts warn that blaming individuals can lead to stigma and shame.

Read more: Everyone’s talking about the Keto diet: Is it safe and should you try it?

“It is not just a lifestyle choice or due to a lack of willpower as many people assume, we know that there are strong social, biological and environmental drivers of obesity that are outside of people’s control,” Anna Peeters, Director of the Institute for Health Transformation at Deakin University, explained. “There are major equity considerations here with Indigenous, non-metro and people living in lower socio-economic status communities being impacted more.”

The report also found that while the 900,000-obesity number is alarming, it only tells part of the story. The largest increase was seen in obesity class 3, also known as clinically severe obesity. This is the most expensive class of obesity and also sees the highest risk of health complications.

“This problem puts enormous pressure on the health system,” John Dixon, GP and obesity researcher at Baker Heart and Diabetes Institute, said. “The risk of complications and mortality impacts in this class of obesity increases and the costs to people’s health and quality of life are immense.”

It’s also a problem for younger generations, with a quarter of Australian children over the age of two considered overweight and 396,000 obese.

What are your thoughts on this report? Do you think Australia has an obesity problem?