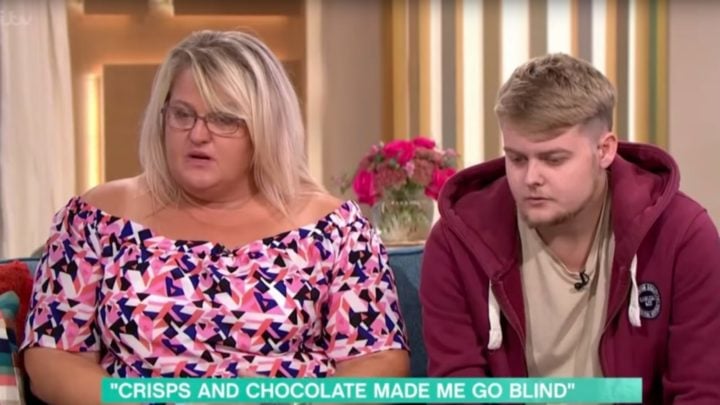 The mother of an 18-year-old who lost his vision after consuming a diet of just hot chips, white bread, crisps and ham has defended her parenting skills and partially blamed doctors for her son going blind. Appearing on This Morning in the UK on Tuesday, Kerry James explained that her son Harvey Dryer hasn’t consumed a healthy diet since he was two but explained that he was living with a rare eating disorder called avoidant restrictive food intake disorder – where food intake is so limited that it causes severe malnutrition.

Harvey originally made headlines earlier this month when Researchers from the University of Bristol explained that his unhealthy diet lacked essential nutrients and caused a serious vision problem called nutritional optic neuropathy – a dysfunction of the optic nerve which is essential for vision. While the condition can be reversible if caught early, it can lead to permanent damage and blindness when left untreated.

Experts said it was Harvey’s ‘junk food diet’ and limited intake of essential vitamins and minerals that caused his onset of nutritional optic neuropathy. The condition is extremely rare in developed countries and it’s highly unlikely to be caused by diet alone.

Speaking to hosts Phillip Schofield and Holly Willoughby, Kerry said she believed her son’s vision wouldn’t have got so bad if doctors and health professionals ran proper tests and took their complaints seriously. She explained that the rest of the family would eat a ‘normal’ diet but that Harvey would choke, gag or be sick whenever they tried to feed him healthy food.

“It was awful. He’d sweat, he was crying, screaming,” she recalled.

Knowing there was a serious problem, Kerry took her son to see a paediatrician to figure out how to get Harvey to eat healthier foods. Experts tried different approaches and a professional even came to observe the family at meals times, but it wasn’t enough to help Harvey consume anything other than junk food.

The issue got so bad that Harvey couldn’t even take oral medication or vitamins and upon requesting injections to help boost her son’s vitamin and nutrient levels, Kerry was refused. Health professionals also failed to give Harvey blood tests upon request.

“She [The paediatrician] said it’s probably pointless doing a blood test because we know the levels are going to be low,” Kerry said, pointing out that professionals weren’t worried at the time because her son was gaining weight and growing taller.

As Harvey got older, the paediatrician implied that he was avoiding healthy foods on purpose, with Kerry recalling: “She actually said to him, ‘You’re getting older now. You need to take responsibility and you need to eat these foods’. Harvey physically couldn’t do it.”

They were also told that things would’ve been different if Harvey was a girl, with Harvey explaining that he desperately wants to eat food, but can’t because of a mental block. Avoidant restrictive food intake disorder was only recognised as an eating disorder in 2013 and impacts people in different ways. Some people fear choking or the sensation of food inside their body, while others simply have no interest in food. Either way, the condition results in malnutrition, but doesn’t necessarily impact how a person grows.

Doctors only discovered that diet was responsible for Harvey’s vision loss in December, noticing that his vitamin A levels – which play a crucial role in vision – were 14 times lower than what they should’ve been. He has lost complete vision in his left eye and the vision in his right eye is deteriorating at an alarming rate.

“We think if they had have done the blood tests then and realised the vitamin A was so low, they may have been able to give him the vitamin A injections then and he could see a lot more out of that right eye and we could have saved it a lot better,” Kerry said.

Harvey has now been prescribed protein shakes to increase his mineral and vitamin intake that was missing in his body, but they won’t do anything to reverse his vision problems. He had been offered the shakes when he was younger, but physically wasn’t able to consume them at that stage of his diagnosis.

Despite the backlash they’ve received since their story made headlines, Kerry insists her son’s condition isn’t a role of bad parenting and explained: “People say it probably because I’m a bad mum and I’ve neglected him. I don’t listen to any of that because I’ve fought for Harvey since the age of two and I will continue fighting for him until he has got that healthy balance of life.”

She added: “At the end of the day he is our priority and I couldn’t have done more than I did.”

What are your thoughts on this story? Have you ever come across avoidant restrictive food intake disorder?