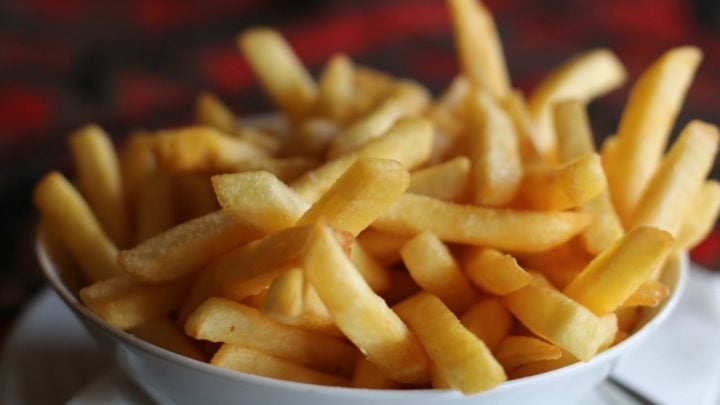 If you’ve got a grandchild who loves nothing more than snacking on hot chips, white bread, crisps and ham, you may want to think twice before you treat them when they next come to visit. An alarming new case study has revealed that a 17-year-old from the United Kingdom went completely blind because of his fussy diet.

Researchers from the University of Bristol explained that the boy’s unhealthy diet lacked essential nutrients and caused a serious vision problem called nutritional optic neuropathy – a dysfunction of the optic nerve which is essential for vision. While the condition can be reversible if caught early, it can lead to permanent damage and blindness when left untreated. Nutritional optic neuropathy is typically caused by bowel problems or medication that interfere with the absorption of important nutrients from the stomach.

In developed countries such as Australia, the United States and the UK, where the boy is from, it’s less common for diet alone to cause nutritional optic neuropathy because food supply is generally of a higher standard than other countries impacted by war, poverty and drought.

Researchers explained that the boy first visited his GP when he experienced severe tiredness. However it took a while for professionals to draw a connection between the boy’s nutritional status and vision and by the time they did, his vision loss had become permanent. While doctors knew the patient was a fussy eater, he had a normal body mass index, height, didn’t take medication and had no visible signs of malnutrition.

Earlier tests confirmed the boy was experiencing low vitamin B12 levels and a type of anaemia, but he was treated with vitamin B12 injections and dietary advice. A year later, the boy returned to the GP with hearing loss and vision problems, but he still had no formal diagnosis for his symptoms.

By the age of 17, the condition had worsened and he was fully blind, with professionals identifying the patient still had vitamin B12 deficiency as well as low copper and selenium levels, reduced levels of vitamin D and bone mineral density. The study, published in the Annals of Internal Medicine Journal, claimed that since he started secondary school, the boy only ever consumed a diet of chips, crisps, white bread and some processed pork.

Experts say it was the boy’s ‘junk food diet’ and limited intake of essential vitamins and minerals caused his onset of nutritional optic neuropathy. The condition could become more common in the future as more people opt for unhealthy diets over more nutritious options.

They also warn that people consuming a vegan diet may also be at increased risk of they don’t supplement correctly to prevent vitamin b12 deficiency. The study’s lead author Denize Atan said: “Our vision has such an impact on quality of life, education, employment, social interactions, and mental health.”

He added: “This case highlights the impact of diet on visual and physical health, and the fact that calorie intake and BMI are not reliable indicators of nutritional status.”

Experts are now calling for a patient’s dietary history to be considered as part of a routine clinical examination in the same way that a doctor would ask about a smoking status or person’s alcohol intake. They say this could detect a nutritional optic neuropathy diagnosis early and allow patients to fully recover if the nutritional deficiencies are treated early enough.

The shocking case study comes just weeks after a new global study which analysed the levels of sugar, saturated fat, salt and calories in popular food and drink items in 12 countries around the world found that the UK actually actually has the healthiest packaged foods and drink options. That survey found that found that the United States of America also has healthier packaged options than Australia, but China and Chile had some of the most unhealthy options.

It’s always important to pay attention to the fat and sugar content in snacks – even if they’re labelled ‘healthy’ or ‘diet’ to ensure both you and your grandchildren are eating a balanced diet.

What sort of snacks do your grandchildren love the most?