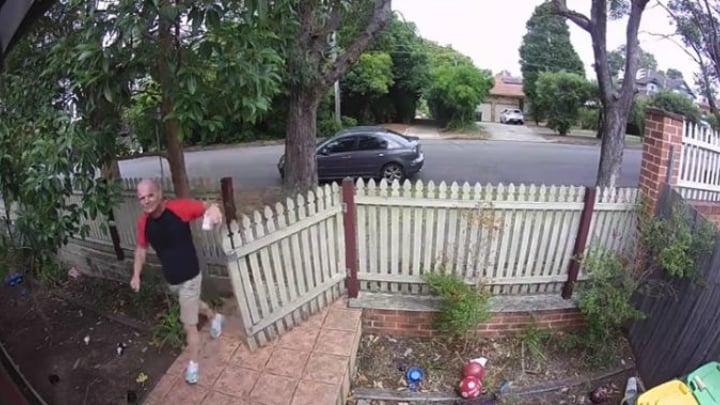 A Sydney mother and her young daughter were inside asleep. Source: YouTube - 2GB

A Sydney mother and her young daughter have been saved from a potential home invasion thanks to a gadget installed in their family home. Jrisi Jusakos and her two-and-half-year-old daughter were asleep, when a man approached their home in Sydney’s northwest.

In a video uploaded to 2GB’s YouTube channel, the man is seen scoping out the property before ringing the doorbell. When no one answers, he attempts to force his way into the home.

What the intruder didn’t know, however, is that the family had just installed a ‘smart doorbell’, which the woman’s husband eventually answered via his mobile phone, spooking the criminal away.

Read more: How to prepare your home to avoid a Christmas holiday break-in

The doorbell system, which is becoming increasingly popular, links to an app on the homeowner’s smartphone and alerts them when someone is at their door. They can then speak to whoever’s at the door through their phone – as if they were standing behind the door in real life.

In a video recored through the doorbell, the intruder is seen jumping back when he hears the husband’s voice and immediately legs it out the gate, saying over his shoulder, “Wrong house brother … yeah no, no, it’s the wrong house, sorry.”

Speaking on the Ray Hadley Morning Show, Jusakos warned others to be “vigilant”. “I dread to think what would have happened if he has made his way in with us in the house,” she said.

The couple had only installed the new doorbell system days before the attempted intrusion.

“I think our new camera doorbell just saved our house from being broken into,” the mother wrote on social media following the incident.

She added: “I’ve seen more footage now to see it was definitely an attempted burglary. Thank bloody christ for this door bell which we just installed a few days ago! Also helps that I have about three camera’s outside so I have this a**-clown from four different angles.”

Read more: Anger after pensioner arrested for protecting his home from burglar

Facebook users were quick to comment with one saying, “That’s so scary,” while another added, “That’s very unnerving,” and a third wrote, “Glad you guys are OK and you had the camera installed”.

According to a report by Nine News, police have since confirmed the man is now in custody over another matter.

What do you think? What security measures do you have installed in your home?