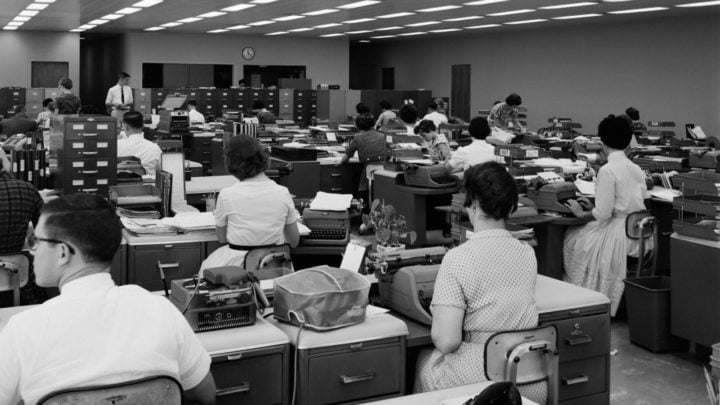 People today were shocked to see the strict rules women in the workplace would have to adhere to back in the day. Source: Getty.

Rules in the workplace have changed dramatically in recent years, with things much stricter for women just a few decades ago. What they could wear, where they could go and how they could act was heavily controlled by those in charge. Nowadays, in a more PC-centred world, most of these old-fashioned rules would never hold up – and even labelled sexist or degrading.

A photo, posted into teacher’s group on Facebook recently. highlights the shift perfectly, showing a few questionable rules that female teachers had to adhere to in 1914.

The list of 12 strangely specific rules varied from telling women they weren’t allowed to dress in bright colours to giving them a list of cleaning jobs to complete at least once a week.

The rules strictly stated women must stay at home between the hours of 8pm and 6am, unless of course they were attending a school function, dresses weren’t allowed to be any shorter than two inches above the ankle and under no circumstances were women to marry during the term of their contract.

No smoking, no hair dye and no leaving the city most likely left little excitement for female teachers to enjoy, but possibly the most difficult rule to follow on the entire list was number four: “You may not loiter downtown in any of the ice cream stores.” It seems even ice cream was out of the question in 1914 for females.

Often, sexism in the workplace grew from the idea that a woman’s place was purely in the kitchen, no where else. Ads fed into this narrative by showing the man as the one who returned home from work at the end of the day, rather than the woman – something that would be sure to kick up quite the fuss in today’s society.

Posted by LUVYOURMANE on Saturday, 19 December 2015

When it comes to out-dated rules, Norwegian Air recently made headlines when a particular rule enforcement proved that many flight attendants are still stuck in the past in how they dress and act in an attempt to uphold a pristine, feminine reputation.

Earlier this month, the airline came under fire for stating all female staff must carry a doctors note with them at all times if they were wearing flats rather than the required high heels. A Norwegian Labour Party spokesperson called the requirement “embarrassing” and said airlines should have progressed further by now, adding: “The year 1950 rang and it wants its rulebook back.”

Strict, sexist rules for women has long been a contention point in many workplaces, and although the issue is still not resolved, at least female teachers today are able to enjoy a scoop of ice cream in peace!

Do you think these rules are out-dated? What sexist rules do you remember experiencing when you were working?