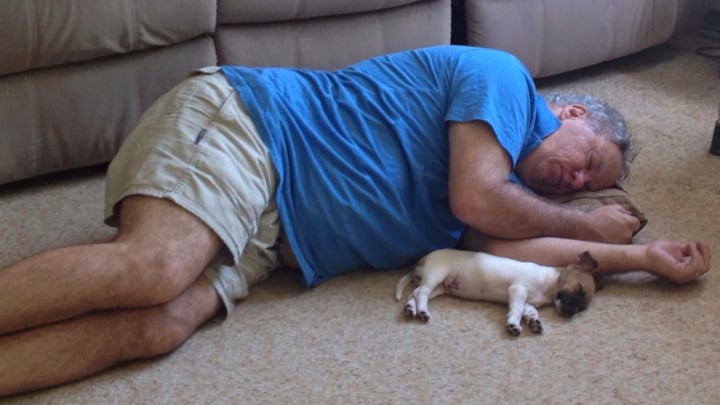 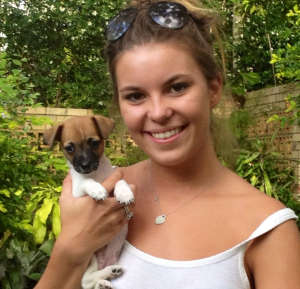 Have you ever found yourself in a situation you swore you wouldn’t be revisiting any time soon? Almost two years ago we said a very sad and final farewell to a special member of our family, Bubbles, our 12 year old Maltese Terrier. He was our baby and held a very special place in our family so losing him was heart breaking. We couldn’t imagine going through that experience again so swore that we wouldn’t be having another dog for quite some time – we’d never say never, because we’re a family of dog lovers!

And then our daughter, Kate, decided to come back home to live… She already had a rat, named Marvin and now she was pleading for us to give her the nod to buy a puppy, which would also be moving home with her. Well, we weakened, again, and that’s how we came to have this little bundle of joy, named Daisy, join our family. Of course there were conditions. Kate has to be totally responsible for this little pup which means taking care of toilet issues, exercising, playing, feeding, dog obedience classes, microchipping, registration, vaccinations etc. I have to be fair and give credit where credit is due. To date Daisy is very well cared for in every aspect of a puppy’s life  by her owner/Mum. 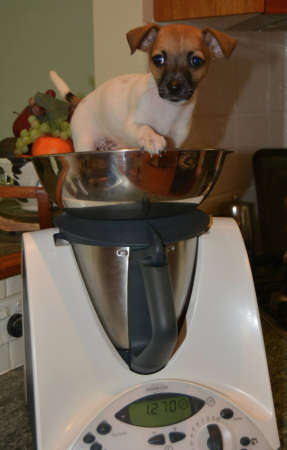 Daisy became Kate’s responsibility at the tender age of seven weeks and was such a tiny little thing! She is a mini fox terrier x Pomeranian (and I swear there’s a bit of Jack Russell in there too!). She weighed just 720gm and was much smaller than a tissue box. When she arrived home in Brisbane one and a half weeks later, she weighed 1.270kg! We know this because a friend of mine popped her into the bowl of her Thermomix, which instantly showed her weight on a digital screen. She had the cutest little floppy ears and was the quietest puppy I have ever known.

Now my husband was still being very touchy about having another dog so soon and declared he didn’t mind having Daisy around but he most definitely did not want to take any responsibility for her or have much to do with her. He wasn’t going to set himself up for more heartbreak is what he was really saying. It’d be fair to say that Bubbles and my husband were very close and real mates. He was Kate’s dog but she was given this puppy when she was just seven years old and had no idea of the responsibilities that came with owning a pet. As is often the case, the parents took on the caring role and each afternoon it was my husband who put on his runners and took Bubbles for his highly anticipated walk. They were buddies and nobody was going to take Bubbles’ place in George’s eyes.

How easily we succumb to the charms of a cute little puppy! A week after her arrival I walked into our family room one day and found them both asleep on the floor – together. A couple of days later hubby arrived home with a plastic bag in his hand and a big smile on his face and announced to Daisy that he had a surprise for her. He’d been to the local Pet Cafe and purchased some doggy treats for this dog that he wasn’t going to have much to do with – chalk one up for Daisy! And the rest, as they say, is history. The pair of them often fall asleep together in the recliner, in front of the TV at night and during the day it’s not unusual to find Daisy asleep on George’s beach towel, on the floor under his side of our bed. 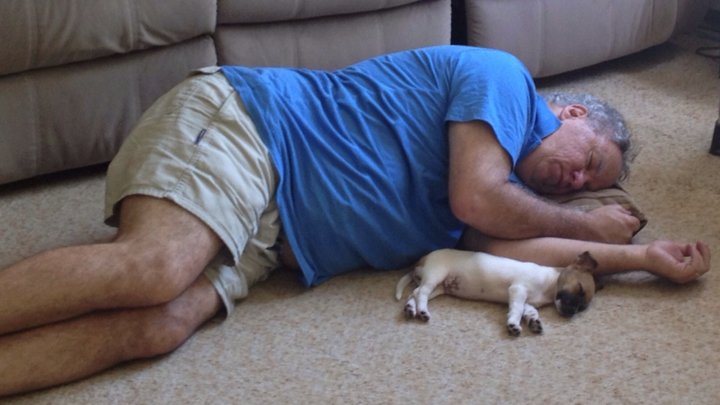 This little bundle of energy has a lovely cosy bed, but getting her to sleep in it has been a bit of a challenge for Kate. More of that in the next “Daisy Diaries”!

Tell us about your pet! What is it and what is his/her name? Tell us in the comments below…