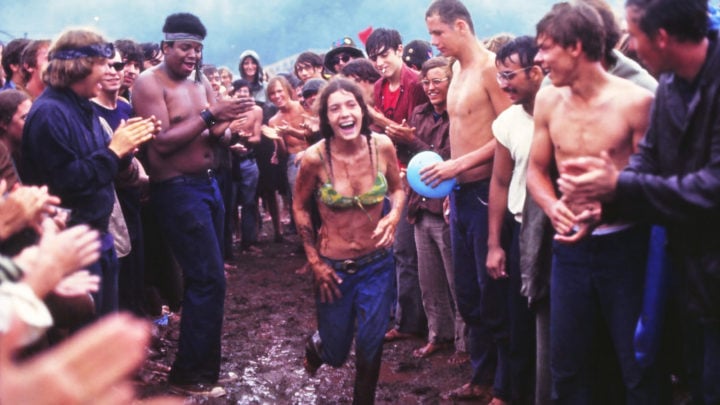 Fifty years on, Woodstock is still to this day one of the most successful and memorable music festivals in the world. Source: Getty.

It’s true what they say about music bringing people together, and 50 years ago it was doing just that at the now-world famous Woodstock music festival. Music lovers from all over the world flocked to America in August 1969 to see some of the world’s best musicians of the time including Janis Joplin, Jimi Hendrix, Sly & The Family Stone, Crosby, Stills & Nash and The Who.

Originally advertised as “an Aquarian Exposition: 3 Days of Peace & Music”, the festival crammed a whopping crowd of half a million people into a 600 acre dairy farm in Bethel, New York. But despite the overwhelming number of people thrown together in front of one stage, police working the event said the crowd remained peaceful, and festival-goers were kind and courteous the entire time.

However, that’s not to say law enforcement didn’t have their work cut out for them as in classic late ’60s fashion, there was no shortage of skinny dipping in the nearby lake, a whole lot of drugs and even more public nudity to be found. Psychedelics were a dime a dozen around the festival with stories that even the ice in the drinks was spiked with acid. Meanwhile, the air carried a constant stench of marijuana and clothes were a rarity amongst festival-goers.

The living situation during the three days was far from a luxury getaway, with flimsy tents and swags filling the surrounding hills. The 1970s film Woodstock even mentioned the interesting fact that there were only 600 toilets on the property to cater for the total of 500,000 people.

Although it went down in history as the world’s best festival, with hoards of people, horrendous traffic and even worse weather – Woodstock was far from a well-oiled machine. Problems arose from the very beginning when 100,000 tickets were sold prior to the event but almost five times the amount of expected people showed up. Because of the surprising arrival of an extra 400,000 attendees, traffic on the roads to the event was a thing of nightmares, causing many people to head in to the festival on foot.

The back-up of cars was so bad that it delayed the arrival of most of the festival’s acts, causing the opening performer, Richie Havens, to play an extended three-hour set in which he ran out of tunes and was forced to improvise a few songs towards the end. This then set off a chain reaction of delays on the first day with the acts running into the early morning finishing with folk singer Joan Baez.

Bad weather also became a major setback for the entire festival as performers struggled to get on stage between intermittent heavy rain. The wet weather and high foot traffic created a muddy soup where the crowds gathered, which luckily became more of a fun novelty for the attendees rather than an inconvenience.

However, the performers didn’t fare so well as they suffered even worse delays than the first day. Most notably on the second day, the rain flooded the stage during rock n’ roll legends, The Grateful Dead’s set which created a risk of electric shocks that caused longer breaks in between songs for the safety of the band.

Because of the previous disrupted set, Creedence Clearwater Revival were pushed back to start just after midnight which lead singer John Fogerty later complained was too late as almost everyone in the crowd had already gone to bed. However, this was definitely not as late as the intended headliners for the night, The Who who started their set during sunrise at about 5am and Jefferson Airplane who kicked off their’s just before 8am.

The delays continued throughout the festival with acts running all the way through the final night. The last headliner of Woodstock, Jimi Hendrix, was originally scheduled to play Sunday night, but didn’t end up stepping onto the stage until 9am Monday morning as he performed to a significantly depleted crowd as most people had already set off on their journey home.

Nowadays, those who attended the festival have become almost as famous and notorious as those who performed, with photos and stories of the wild weekend circulating even to this day. Youngsters running barefoot through muddy crowds sporting peace signs, flared pants, fringed jackets and round glasses quickly became the poster children for the out-of-this-world experience that was Woodstock.

With a line-up overflowing with musical legends, a crowd filled with young pacifists and drugs and love everywhere you turned, Woodstock became a symbol for the efforts of peace amongst the otherwise tumultuous period in time. The fond memories of shoeless, shirtless long-haired youngsters gathering together in a muddy field will now forever stand as the quintessential late ’60s experience and an unforgettable moment for everyone who was lucky enough to see it first hand!

Do you remember when Woodstock happened? Did you or anyone you know get to experience it first hand?