From Truman to Trump: Every time the Queen has met a US President 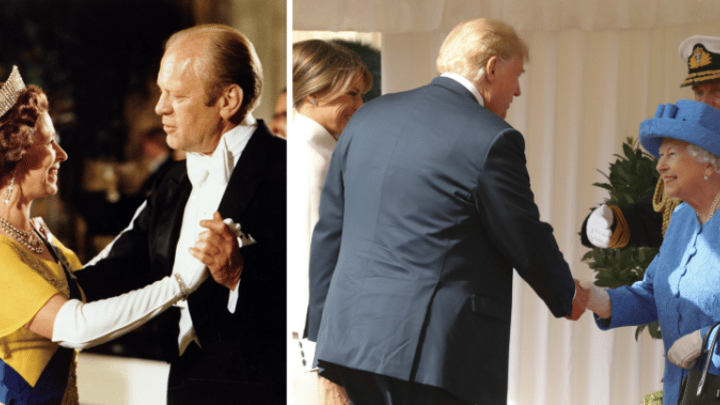 After 67 years on the throne, the Queen has met her fair share of powerful leaders. Source: Getty.

Throughout her many years as monarch, 92-year-old Queen Elizabeth II has met leaders from all over the world; and as Donald Trump continues his highly-anticipated visit to the United Kingdom, he officially becomes the twelfth United States President to shake hands with Her Majesty.

From horse riding to sharing a ballroom dance, the meetings are always filled with different and interesting events. As the President’s current visit comes to an end, Starts at 60 looks back at the most memorable meetings between the many heads of state and the monarch.

Before she was Queen, a 25-year-old Elizabeth met President Harry Truman in 1951 when she had to stand in for her ill father, King George VI. Truman raved about the now Queen and the Duke of Edinburgh, describing them to American news outlets as a “wonderful young couple, who have so completely captured the hearts of all of us”.

The first president she met following her crowning was Dwight D. Eisenhower in 1957 during the Cold War. Despite the tense period, the Queen found time to attend her first American college football game and even did some sight-seeing when she visited the site of the first British settlement in America.

One of the biggest moments for the US and UK alliance was when President John F. Kennedy and the First Lady, Jacqueline Kennedy, visited Buckingham Palace in 1961. Half a million people arrived at the gates of the palace to greet the pair when they arrived. The Queen and the duke held a state dinner, which the president later described in a letter to the Queen as a “delightful evening”.

The Queen met President Richard Nixon in 1957 while the royal family was shooting a self-titled documentary about their lives. The video of their meeting was broadcasted to the public later that year along with other insights into the lives of the royals.

During Gerald Ford’s presidency in 1976, the 200th anniversary of America’s declaration of independence from Britain occurred. The Queen flew to Washington to show her support for the continued relationship between the two states and even shared a special dance with the president himself.

One of the more controversial moments occurred during President Jimmy Carter’s visit in 1978 when he completely broke royal protocol by planting a kiss on the Queen Mother’s lips. The Queen Mother was far from impressed with the gesture from the president and a White House officer later told the Chicago Tribune she was mortified and said: “Nobody has done that since my husband died.”

Ronald Reagan and his wife Nancy visited Windsor Castle in 1982 during the very beginning of his eight-year stint in office. Reagan became the first American president in history to stay overnight at the castle and even revisited two more times during his presidency. The pair of powerful leaders bonded over their love for horse riding and even spent time riding around the grounds together. The Queen was known to be fond of Reagan, and even spent some time at his Californian ranch in 1983.

When President Barack Obama first met the Queen in 2011, he and his wife Michelle gifted the royals with some photographs and memorabilia from her parents’ US visit back in 1939. The Queen then returned the sentiment with letters collected over the years between previous leaders of both nations. To this day, the former President describes the Queen as one of his favourite people.

He makes her laugh.

Prior to his current visit, President Donald Trump first met the Queen in 2018 where they had tea at Windsor Castle. On his current trip he has shared a private lunch with the Queen, enjoyed tea with the Prince of Wales and Duchess of Cornwall and attended a banquet hosted by the monarch.  Not one to avoid controversy however, Trump shocked royal fans when he broke protocol by patting the Queen on the back during a speech, however others were not convinced he was touching the monarch at all.

After 67 years on the throne, the Queen has definitely met her fair share of US leaders. The only question is – who will be next?

Who was your favourite US president? Do you remember these meetings?