Forget the pens! Remember the old school desks with an inkwell? 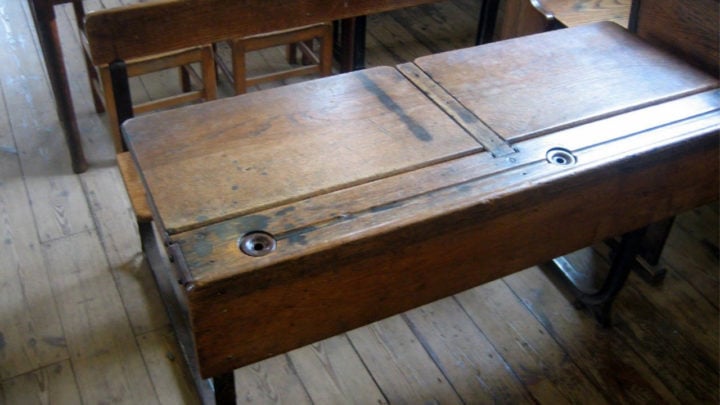 Aussies would remember the old school desks with an inkwell during their schooling days. Source: Facebook/ Adelaide Remember When

In the classrooms of today you’ll find tables and chairs all lined up perfectly, with plenty of space for students to gather together and work on projects or discuss topics, but that’s not what Baby Boomers experienced as kids growing up in the 1950s and ’60s. And pens were certainly not around for some over-60s, with an inkwell instead used for taking notes and carrying out daily tasks.

Most old school desks included an inkwell which had to be refilled by a student who was given the special name of ink monitor. It was a highly prized job back in the day and came with the responsibility of carrying around a bottle and filling up the inkwells each morning before the rest of the students arrived.

The desks themselves differed between schools, but generally they were wooden in a kind of block style. They were solid and extremely heavy, so couldn’t be moved around easily – plus there was no swinging back on the chairs like kids do nowadays. There was also a special compartment under the lid which could be used to store books, papers and lunch. And of course, a pencil/pen slot carved along the front edge of the top and a small hole in the front right corner that was used to hold an inkwell.

Though a handy place to store the ink, it was often used as a nasty trick, with some kids dipping the hair of the person in front – most likely a girl with plaits –  into the ink. Though funny to the person doing it to begin with, it usually ended in some harsh punishment from the teacher or principal, most likely a slap on the hand with a cane.

Others would remember carving their name into the top of the desk, or drawing pictures on the inside of the lid where the teachers couldn’t see. Now those old school desks are considered treasures, with some choosing to restore them and place in their homes. While others keep them in the original condition and use them as a way to share stories with the grandkids about how things have changed over the years.

Over the years since the old school desks were replaced with more modern versions around the country, Baby Boomers have taken to social media to share their memories of their childhood days in the classroom. “Our desks had the long seats that fell back,” Maria Denis Allenden wrote on Facebook group ‘Adelaide Remember When’.

“The whole table and seat were attached on the floor if my memory serves me correctly. We had a shelf under the table top where we kept our books! I remember getting out of composition classes by spilling ink on my dress. Of course, it had to be washed out immediately.”

“Apparently one of things we had to do at the end of the year was to apply wax so when the cleaners came in during the holidays they were ready to be buffed,” Christine Hobbs said. “But, I’m sure my husband told me that he recalls having to sand his before waxing. So, maybe it was to get rid of the inscribed initials.”

While Gaynor Harrison added: “I can remember sitting in these desks when I first started school. I don’t think that inkwells were still being used. I only know that I got excited about having a nice sharpened pencil and the following year progressing to biro … woohoo!” And Julia Loryman said: “It was a great moment when you went from pencil to a pen all with a nib and you had to learn how to use the ink without making too much mess.”

Do you remember the desks with the inkwells? What are some of your memories from school?