Fun without the frills: How kids kept themselves entertained in the 1950s and ’60s 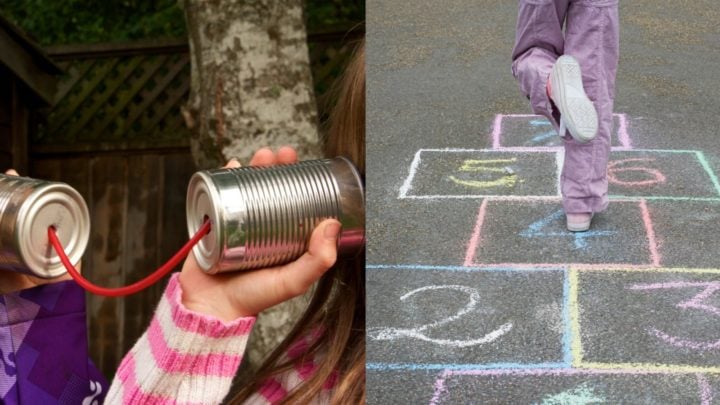 Those who grew up in the 50s and 60s will always carry special memories about these games. Source: Getty.

Before kids had smartphones, TVs and video games, there were no mod-cons to keep them entertained throughout the day. But that didn’t stop those who grew up in the 1950s and ’60s from making some unforgettable childhood memories with whatever they could get their hands on at the time.

To turn a boring afternoon around, all one would need back in the day were a few everyday materials that could be sourced from around the house and, of course, a good imagination to think up some exciting new games. And even though there wasn’t much to it, the fun would continue until it got dark and mums and dads all over the neighbourhood would find themselves having to drag their kids back inside for tea.

In those days, one of the easiest games to get amongst was Brandy where all kids needed was something to throw and a few friends to throw it at. The aim of the game was to get away from the person who was ‘it’ while they hunted the others down with a ball. No head shots became the main (and often only) rule but, more often than not, the game finished early either when parents called it a day or someone got injured while desperately trying to escape.

Then there was hopscotch, where all you needed was some chalk and some flat ground, or ‘red rover all over’ where running across a field dodging the kids who stood in your way spiked a new level of adrenaline that, for many, is probably still unmatched to this day. Meanwhile, girls could be entertained for hours on end if they saved the knuckles from the weekly Sunday roast to play knuckle bones while boys where simply happy to throw around a few marbles in a dirt patch all afternoon.

Backyard cricket was definitely one of the more popular games at the time, with no need for a proper bat or ball. A simple bin or apple crate worked just as well for the wicket while an old plank of wood or a thick branch could do the job in place of a standard bat.

Meanwhile, if there were some of mum’s old jam tins lying around, then there was definitely some fun to be had. Kids could run a piece of string in between two cans to chat on the ‘phone’ just like their parents, or even tie some rope to the bottoms of the tins to make for a set of stilts that would have them wobbling around the backyard all afternoon.

Other games required nothing at all, like hide and seek where all kids needed were a few good sneaky spots around the house or Simon Says where the ability to listen was the only necessary tool. Even things like hand clapping meant there was nothing to do but spend an afternoon learning a rhyme and a pattern for no other reason but to show it off in front of parents later in the day.

With all of the games that were played in the comfort of old neighbourhood streets, it’s no wonder kids of the ’50s and ’60s have some of the best memories of their childhood. And above all, it proves that maybe kids these days don’t need the distractions of technology to keep them entertained throughout the day. In fact, maybe all they need is a tin can and some string to turn their afternoon completely around!

What was your favourite game of the past? Do you play any of these games with your grandchildren today?