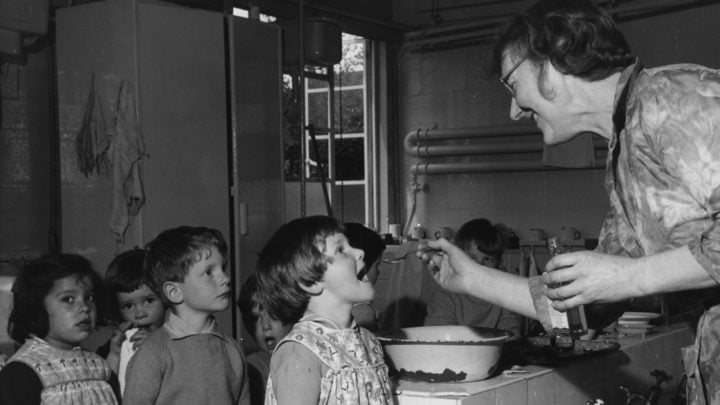 Baby Boomers would remember being forced to consume a spoonful of cod liver oil each day. Source: Getty

The gross taste of fish in oil form never tempted any child growing up, but for Baby Boomers, their parents were adamant it would relieve a multitude of health issues and hence was forced upon them each day.

Many were raised on spoonfuls of cod liver oil, its taste and smell so disgusting it would make them dry-retch. Even today, just thinking about it probably has some people grabbing their tummy to stop themselves from gagging.

Sometimes the oil was mixed with orange juice to help dilute it and mask the terrible fishy flavour. But, in all honesty, that generally didn’t help much. And unfortunately for kids, the constant whinging didn’t deter their parents from making them consume it either. It’s a childhood memory that most don’t want to remember, but sadly do.

“Parents are probably grandchildren of NHS kids given cod liver oil and orange juice in the 1950s,” @TweetsinEpping wrote on Twitter. “I can’t say the spoon of cod liver oil tasted nice – it was foul. Sardines taste better!”

“My mum used to collect orange juice from a clinic for me in the 1950s,” @dsandford125 said. “Had to swallow a dollop of cod liver oil first mind you.” While @FredNurf added: “My grandmother came from Edinburgh. In sunny Australia she still gave me a teaspoon of cod liver oil every morning as I headed off to school, out of habit.”

However, in the defence of parents, cod liver oil does have many health benefits. It was used as early as the 1700s to treat rickets, an illness which causes the softening and weakening of bones in children due to a lack of Vitamin D. While it was also promised to help rheumatic conditions such as lupus and arthritis.

As the years went on further research was carried out on cod liver oil and it was found to contain large amounts of Vitamins A, D and omega-3 fatty-acids. Scientists believe because of this, it can help to support eye health, reduce the risk of heart disease, improve gut health and improve the symptoms of mental health illnesses such as anxiety and depression.

Thankfully, researchers have also worked out an easier and less disgusting way to consume the oil so kids nowadays don’t have to go through the same hated daily ritual as their grandparents. The oil is usually taken within gelatin capsules and can be easily consumed with a glass of water – much more pleasant than having to slurp up the gross flavoured liquid from a spoon.

Do you remember having to take cod liver oil? What are some of your memories with the foul tasting liquid?