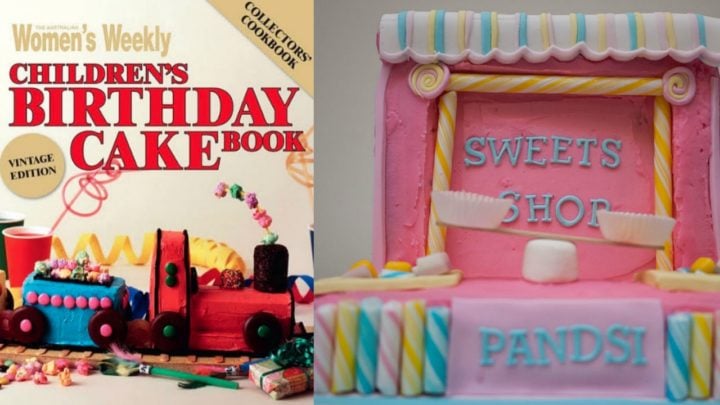 The iconic book created a number of memorable cakes including the famous sweets shop. Source: Instagram/Getty.

So, after four decades of making kids’ dreams come true (and making parents’ lives slightly more stressful and complicated) Starts at 60 takes a look back at some of the best of the bunch from the iconic baking handbook.

The book was originally published in 1980 by Women’s Weekly and featured 106 different cakes modelled after everything a child could dream of, from animals to automobiles. And with a step-by-step process of assembly and decoration, the book marked one of the first times Aussie parents were encouraged to bake homemade cakes for their little ones.

Every child from the ’80s and beyond had their favourite pick from the book with many still choosing to bake them today as a nostalgic birthday treat. The pool was always a popular choice with chocolate logs covering the outer edge and a nice green jelly filling to represent the water.

Animals were also a common theme throughout the book, with recipes for cakes resembling a rabbit, lion, pig, tiger, koala, elephant, mouse and even a turtle. Meanwhile, the intricate train took over the front cover complete with colourful steam made of popcorn and the chocolate piano became an all-time favourite thanks to the impressive additions of a seat and sheet music.

Aria turns 6 today 🥳 I gave her the Woman’s Weekly birthday cake book last week for her to choose a cake, and she chose the bunny rabbit 🐰 I made the brown sugar kumara cake with cream cheese frosting for it. I also made the chocolate’feed a crowd’ cake with chocolate frosting (also from cookidoo) for her to share with her kindy class today. Lucky girl 🥰 #rabbitcake #womansweeklybirthdaycakebook #womensweeklybirthdaycake #bunnyrabbitcake #chocolatefeedacrowdcake #vegancake #brownsugarkumaracake #thermomix #thermomixaus #missthermolicious #6thbirthdaycake #sugarbydesignaustralia @sugarbydesignaustralia

But not all the cakes were winners, with some looking overly daggy by today’s standards. Some of the less popular cakes from the book included a melting candle, a sewing machine, a monster and of course the iconic duck with popcorn hair and potato chips for its beak.

Author Pamela Clarke admitted that the book put birthdays on the map for kids saying they would mull over their decision for days on end. But, the birth of the book wasn’t just one quick and easy moment.

“We racked our brains and tried to think of just about everything that a child would have been interested in,” she told the ABC. “In fact, in that book there are 106. We wouldn’t do that number of cakes in any kid’s cake book now.We broke a lot of rules making those cakes.”

These rules include using packet mixes to keep consistency in the various shapes as well as using basic buttercream as the frosting for the cakes to strategically keep it simple, while avoiding complicated techniques like piping.

Clarke said that one her favourite cakes was the Dolly Varden thanks to its simplicity of a doll popping out of the top of a cake skirt covered in pink and white marshmallows. Meanwhile, her least favourite was the tip truck because how difficult the mechanics of it all were – even telling new readers of the book to flick to where it features and just “glue those pages together”.

The book has been reimagined by Cadbury this year in celebration of the milestone anniversary, offering Aussie kids a more chocolate-centric twist on the classic cakes. However you’ll have to be quick as the limited edition book is only available until March 10.

Do you remember which cakes you've baked from this book? Which was your favourite?