‘My shame at meeting the Queen wearing Wellington boots’ 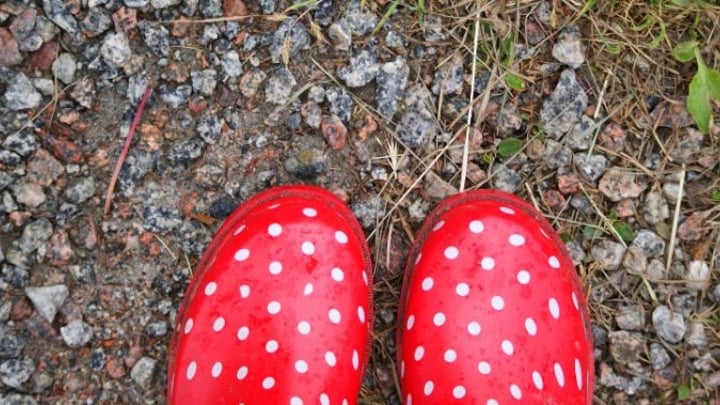 Marnie felt shame at meeting the Queen in her Wellington boots. Source: Pixabay

Our small housing estate was abuzz with the news the Queen would be going to Rochester Airport just across the road, which meant she would be close enough to wave to. Mum was going to take us up to the main road so we could join the crowds watching her pass by.

It was 1962 and at nine years old, I was almost overcome with excitement. I had chosen my best clothes and shoes for the occasion. In my dreams, the Queen stopped and got out of her car in a beautiful white dress and jewel encrusted crown to tell me how beautiful my shoes were. The excitement was almost too much to bear.

Then disaster struck, Mum was called in to work at the post office for that day, and as it was the school holidays, we would have to go to Mrs Robertson’s to be minded. I didn’t like Mrs Robertson, she was mean to us when Mum wasn’t around.

Mum asked her if she was going to see the Queen and she said “Certainly not!” so Mum told her I was taking my good clothes and shoes to change into and could go and wave to the Queen on my own, while my younger siblings stayed behind with her.

We were sent out to play in our old clothes and rubber boots. My good clothes and shoes were put inside to keep them clean. Dad had told me the Queen was due at the airport just after lunch so to get changed then and walk up to the main road, but don’t cross it.

It was such a long morning, but Mrs Robertson finally came out with the sandwiches Mum had packed for us and I asked if I could change into my clothes. She ignored me and went back inside and shut the door.

We ate our sandwiches and then I knocked at the door to ask again. There was no answer. I called out — nothing. I thumped at the door, but everything I did was just met with silence. It was as if she wasn’t home. I don’t know how long I tried for, crying and begging her to throw the clothes out the window if she wanted to but still, there was just silence.

I knew time was ticking on and I was faced with a dilemma, two of them actually. Should I keep trying and miss seeing the Queen or should I go in my play clothes and boots? I decided to go and hope I could find a position where I could see her, but she could only see the top of me.

The second dilemma was that of my siblings. I had always been told I was the eldest and when no adult was around I was responsible. I had no way of knowing whether Mrs Robertson was at home or had gone out, so there was only one option, they had to come too.

The crowds were already quite thick when we got there, so we walked along to where it was a bit thinner and we could push our way closer to the front. Policemen were positioned along the road to keep order and we could hear the cheers rising up from right down the end of Maidstone Road so we knew she was on her way.

Then the unthinkable happened, three-year-old John, pulled his hand from my grasp and ran across the main road. I followed, but a policeman had already scooped him up on the far side. He was about to escort us back, but by then the cheering was deafening and the cars were almost on top of us. He put John safely over the wire fence that bordered the airport and told me stay put while he rushed back to his post at the gate.

There we were, standing in full view, John and I the only ones on the wrong side of the road.

I couldn’t see the Queen but as the cavalcade slowed to turn in the gate a woman in one of the cars saw my dear little snotty nosed brother standing on the wire and copying the crowd with his waving and excited yells. She smiled and pointed at us and waved back.

The policeman came back to get us and asked if we had seen Her Majesty, I said no but a lady in one of the cars who was wearing a scarf waved at us. He said that was the Queen — she didn’t wear her dress and crown when she was going to the airport. I didn’t believe him.

My parents confirmed it and I got a severe lecture for taking my siblings with me. Nothing could be worse however, than the overwhelming shame I felt at the Queen seeing me in my Wellington boots.

Have you ever met someone famous? How did you react?