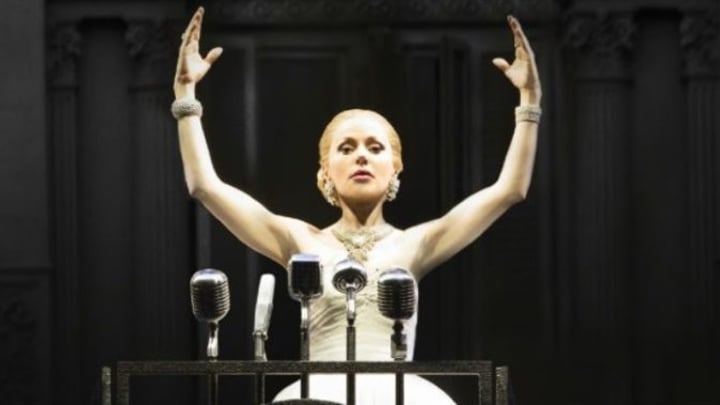 One of my great passions is that of ‘show business’. I’ve been involved in the industry for around 50 years and it has allowed me (and my husband Sacha) to become associated with some of the biggest names, including the late, great Debbie Reynolds (who became quite a good friend), Douglas Fairbanks Jnr, Jill Perryman, Julie Anthony, Joan Sutherland, Googie Withers and John McCallum, among others.

I’m fortunate to remain involved in the industry and I love by working in the box office at the Mandurah Performing Arts Centre.

It is a thrill to be invited to many opening nights across Australia and in September, Opera Australia began is recreation of Andrew Lloyd Webber’s Evita in Sydney. It follows the success of sell-out productions including South Pacific, The King and I and the 60th anniversary production of My Fair Lady. If you are based in Melbourne, I highly recommend putting this on your ‘must see’ list of stage performances. It is being performed at the Arts Centre Melbourne, State Theatre until February 3, 2019.

Evita charts the story of Eva Perón, wife of Argentine dictator Juan Perón, from her humble beginnings through to the extraordinary wealth, power and status that ultimately led her to be heralded as the ‘spiritual leader of the nation’ by the Argentine people.

This musical captured the attention of the public when it was first staged in 1978 and in its 40th year and Andrew Lloyd Webber’s 70th year, this modern masterpiece has been brought to Australia in all its original glory.

Tim Rice and Andrew Lloyd Webber’s Evita is iconic, with more than 20 major awards to its credit, including the Olivier and Tony Awards for Best Musical, a Golden Globe and an Oscar for the film version starring Madonna and Antonio Banderas.

Tina Arena stars as Eva Perón and despite her diminutive stature, her voice was extraordinarily powerful. I was surprised at how skilfully she was able to portray the many aspects of Perón’s personality — from a naive teenager keen to leave her poor upbringing to a woman who had become ravaged by illness but was desperate to hold on to her power.

At a time when set production has become excessive, it was clever design that won me over with Evita‘s simple set. There was a handful of furniture mixed with a giant screen showing footage of the real Eva Perón and the crowds who adored her.

Most will be familiar with ‘Don’t Cry For Me Argentina’, having heard it played on radio at some point, but in this production it is less ‘pop ballard’ and more masterful, making it’s performance one of the most moving moments in the musical.

The supporting cast are excellent. Paulo Szot as Juan Perón with his rich operatic voice was a joy. Kurt Kansley as Che Guevara, who is a cynical narrator, keeps the audience involved in the story with his energetic performance. While newcomer, Alexis Van Maanen is one of Perón’s mistresses, and her performance of ‘Another Suitcase’ was incredibly moving.

Larry Fuller’s choreography was very Latin and very exciting, and the orchestra — which was much larger than is currently the case in most musicals — was lush and filled the auditorium with the most glorious sound.

Are you a fan of musical theatre? Have you seen Evita?