‘The incredible journey our dog made to reunite with his family’ 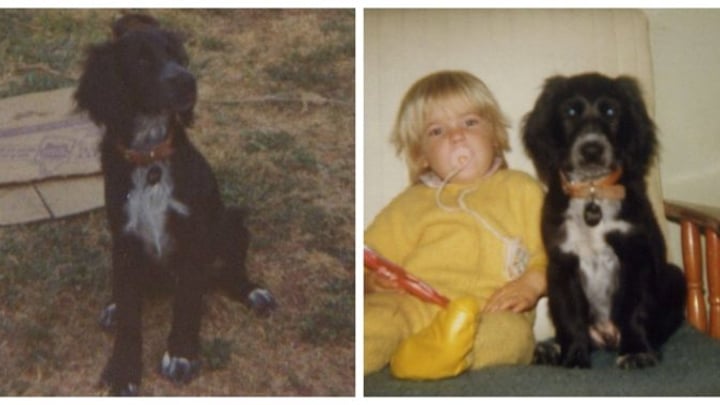 Ben the dog made an incredible journey. Source: Marnie Rogers

Ben was supposed to be a Cocker Spaniel. His mum was definitely a Cocker Spaniel and, as a puppy, he looked the part. He had the beautiful disposition, and the floppy ears and sad eyes of a Cocker, but he grew, and grew and grew.  He adored the children and they adored him, so while they were little and just played in the back garden, everything was fine.

The problems began when the children were older and were allowed out of the garden. When they were riding their bikes or playing with their friends across the road, Ben wanted to be out there playing with them too, but the council took a dim view of dogs running free in the street.

We were in government housing so had high, corrugated iron fences enclosing the back garden, but Ben quickly discovered that if he jumped he could see the children over the top.  It didn’t take him long to work out how to cling to the top to watch them, and from there, to jump over.

We put a loose chain across the top – Ben mastered that in no time. We extended the height of the fence – it helped for a little while, then he began disappearing from the back garden and mysteriously appearing in the front.  He had realised that side and back fences led into other gardens that didn’t have extensions to stop him getting out.

People complained, the council got nasty, the fines got more than we could cope with – so in the end we decided we would have to find him a new home.

We quickly discovered that no one wants a problem dog and after another run in with the council, they suggested we take him out to a dog sanctuary in the Adelaide Hills.  The people that ran it guaranteed that he would not be put down and that they would find him a more suitable home, so we paid our money and said goodbye to Ben.

About two months later, a neighbour across the road mentioned her little, pedigree shih tzu had puppies. I went in to have a look at them and they were adorable.  She didn’t know what the father was though. “I really don’t know how it happened,” she said. “Milly has always been locked up in the back garden and there is no way any dogs could get in, it’s a real mystery”. I looked closer at the little black and white bundles of joy and a twinge of suspicion dawned. I quickly shook it off. Ben had been gone for ages.

A couple of days later, I heard my neighbour yelling something and looked out to see her shouting at a skinny, straggly dog sitting at her front gate and I went over to investigate. She asked me to ring the council for her (she didn’t have a phone and often used mine) as the dog just sat at her front fence and refused to leave. I laughed and said, “He’s black, perhaps he’s the father of the puppies come to see his offspring”.  It was only then that I looked at him properly.  His hair was matted, he was so skinny you could see the outline of his ribs, his paws were raw and a dead matchstick was clinging to his ear, but there was no doubt about it – it was Ben.

I tried to convince him to come across the road home with me, but though he wagged his tail and nuzzled my hand, he refused to leave the gate. “As silly as this sounds, I don’t think he will leave here until he has seen Milly and the pups,” I told my neighbour.  She was horrified. “I’m not letting that filthy animal in my house,” she said.

Eventually I convinced her to bring the puppies out and Milly followed. They stayed on the inside of the fence, but Milly went straight to the gate and she and Ben touched noses through the wire. She went back to the puppies and settled down on the blanket with them. Ben at last relaxed and laid down on the footpath, his nose resting on his paws, and he watched them until they were taken back inside, then he walked across the road and sat at our front door waiting to be let inside.

He was sick on the way to the vets and it was obvious he had been rifling through rubbish bins to survive and eating teabags, cigarette ends, match sticks –whatever he could get. Fortunately apart from his paw pads being raw and bleeding and him being malnourished and exhausted, he was fine.

The animal sanctuary told us he had been given to a family on a property at Two Wells– about 50km – away and confirmed that he had gone missing from there a few weeks later.

Ben recovered from his adventure and a few months later was back to his old self – and his old tricks, so once again we had to find a new home for him. This time we found someone in a neighbouring suburb to take him and stayed in touch with her to make sure he stayed put.

Do you have a pet? Is your pet mischievous?