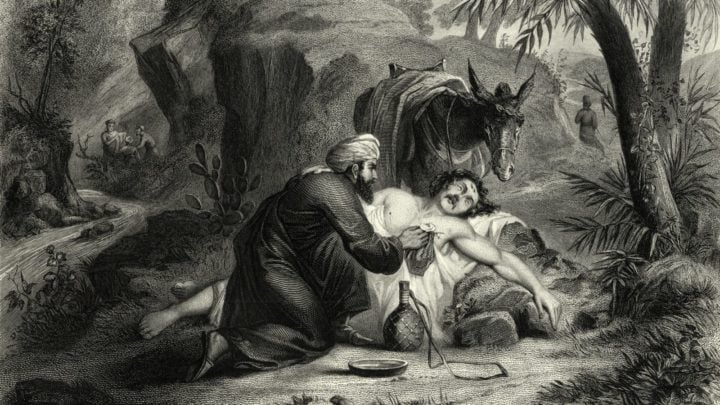 Rod looks to the parable of the Good Samaritan and wonders where such people are today. Source: Getty Images

When I was a youngster, like all the other non-Catholic kids in our neighbourhood, I was dragooned into Sunday School for two precious hours every weekend. We weren’t a religious lot and our attendance was generally the cause for resentful muttering on our part; and it wasn’t until much later that we appreciated the good sense of it all: that it enabled our parents to read the old Sunday papers, undisturbed by squabbling brats, and most importantly, it allowed them “the great Sunday morning lie-in”. Ahem! Ahem!

I doubt that many of us emerged from our brush with religion with any great appreciation of the scriptures, but I am sure that our appreciation of the tapestry of life was enhanced by the enthralling tales that were liberally sprinkled through those Sunday mornings. Daniel and the Lions’ Den, Jonah and the Great White Shark spring readily to mind. I can still visualise the blackboard illustrating how Mallory and Irvine disappeared near the crest of Everest in 1924 (Hillary and Tenzing had not summited at that time).

But the one story that has stayed near me throughout the subsequent decades has been the Parable of the Good Samaritan, rather like the stabbing pain from a dormant toothache when I feel that I have crossed some invisible boundary in good behaviour.

The last time I felt that pain in a seriously cringing way was, I suppose, back in 1989 when, at a crossroads in my life, I had cause to cast my mind back over the events of the previous years. I didn’t like what I recalled. In a minor way, I realised I had played a part in the humiliation and destruction of a reasonably significant figure in public life and it was preying on my conscience.

The throbbing of conscience, however, was not because the man’s overthrow was not in the public interest, as we all believed so righteously, but because it was done in such a cowardly fashion. At the very least, the victim — let us call him J — deserved to be addressed man-to-man and told respectfully that (nothing personal) circumstances dictated that his time was up and he must move on. For the greater good.

Severely prodded by my wife, I then did something that would have been unthinkable in the hard-as-nails world I had inhabited for 20-odd years: I telephoned him and apologised for my part in the shabby exercise, fully expecting to get the good kicking I felt I deserved.

I was shocked by his response. Although time had not be kind to him since his demise, he himself was kind, and most significantly, conciliatory about the difficult position I was in as a subordinate with several mouths to feed. And then he went further and invited me to lunch with him at his club, which was one of the most prestigious in Sydney. To quote one of my childhood friends, I felt small enough to dangle my legs over the side of a three-penny bit.

The remarkable point about this event was that an admission of culpability didn’t inevitably lead to the utter destruction of he who admitted fault and regret, while our man J, the offended victim, actually emerged as the moral superior, in behaving like a well-mannered gentleman, unlike those who had brought him down.

The thing about the Good Samaritan was that he went to aid of an assaulted traveller by the roadside despite being of a lower social caste himself and despite the possibility that the muggers might return and inflict the same punishment on him. As an example to us impressionable kids, the Samaritan was behaving in a genuinely human manner instead of looking the other way and walking on. Even faster.

So surely, then, the only true human response to causing hurt to another has to be to admit that error, accept the consequences without whingeing, and then try to do something to rectify the situation, if that is possible.

I was reminded of this during the summer bushfire crisis when David Elliott, the New South Wales emergency services minister, abruptly returned from a planned vacation in Europe to his post in the control room. It was not that he returned that impressed me, but his explanation. No dodging, no deflecting, no mealy-mouthed hiding behind family; he simply said, and I heard him: “It is inexcusable” to desert his post in our hour of need.

This was truly gob-smacking to hear someone in high public office admit, without tricky semantics, to an error judgement and, hence, leave himself open to the community’s recriminations. Needless, to say, there were none; he was back on the job and the community put aside any thought of punishment.

Why can’t people say ‘Sorry’ any more, because that was the underlying theme behind those Sunday School classes so long ago — that every riveting Bible story was not about living a sanctimonious life apart from your fellow humans but, rather, was trying to prepare us for a world where we would no longer be self-centred children but would become, in the words of the great English poet John Donne, living, breathing examples of that pearl of wisdom of his, “no man (or woman) is an island”.

In my own extended family, there was an ugly falling out some years ago between two siblings, which resulted in one behaving reprehensibly towards the other. A simple ‘Sorry’, without explanation or grovelling, would have repaired much of the damage. Maybe even healed the breach. But the best we heard was a sneering “I’m sorry you feel that way”. And so the breach widened, to become virtually impassable to this day.

That’s what worries me when I consider the ugly storm clouds gathering around the 25 million of us. At a time when we might need all hands to the pumps, I think that a childish culture that approves of treating one’s neighbours as expendable collateral damage in pursuit of our own self-obsessions, will not prepare us for what is certain to come.

I wonder what the Good Samaritan would have to say 2,000 years later?