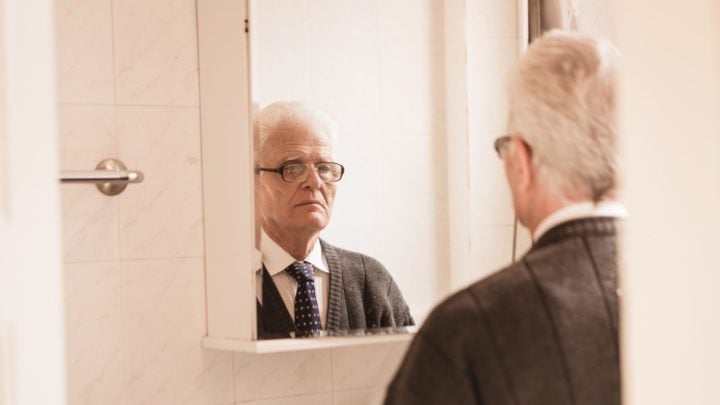 Sitting in the darkness, his bare legs clasped to his chest, the boy held his chin to his knees and watched the moon over the grass, burnt silver grey by the withering, unrelenting heat.

He could hear the old man still rattling around the kitchen, mumbling, hard bastard, tough bastard. He’d sleep soon, and when the boy heard the snoring sound that would allow his tensed muscles to finally relax. He’d know then that the cycle was almost completed. The woman was now sleeping, her house dress torn and her body starting to discolour with the bruising from the struggle in the kitchen.

The old man had grabbed her until the fear became too great and she called out for the boy. The woman was of the make-do generation, skilled at stretching meagre resources, making the best she could. Her frugality didn’t stop the old man, but whatever had triggered tonight’s anger was not as bad as others when measured against the past. Her eyes were not blackened or her lip, split and bleeding. There were no tufts of hair on the floor. This time.

Soon the moon would tire, and the sun would climb, and the boy would hear the sounds of the old man leaving for a long day wrestling sheep in the searing heat of the shearing shed. The boy always ended up staring into the dark night, convinced now that nothing could surprise him, nothing could disturb him.

This was past the dead man’s hour, but sleep refused to come. When the blaze in the open kitchen fire had dimmed to coals and ash, things seemed different. The boy could get on with the daily routine. The cow would have to be milked and the wood cut, and he would have to be ready for the school bus, with its 45-minute round trip to the school.

But that night changed everything, drove a wedge between father and son. In that second, holding the old man back against the wall, forearm jammed across his throat, in a swirling mixture of beer, sweat and sheep fumes, anger sliding into contempt; in that space, one breathe away from being out of control, the boy had screamed “I’m gonna f***ing kill you.”

Whump! Whump, whump! Three rips to his ribs – just as the old man had taught him. “Don’t worry about the head, when you are in close just go for the body, work the ribs” the old man had said – and the boy had been an eager student.

Fist against ribs – three times. Fifteen summers had toughened him, had given him physical strength and the arrogance of youth.

The woman, frightened by the exploding, uncontrolled rage in her son, had shepherded him away, pushing him into the darkness. Sitting in the darkness, replaying those seconds time and time again, the boy felt that part of him, the innocence, had slipped away overwhelmed by the anger, by the knowledge that nothing could ever be as it was.

Soon the sun would nudge over the horizon and the cycle would be complete.

Forty-seven summers later, the boy is sitting in a small, trendy and overpriced barber shop in inner-city Brisbane. The blonde cutting his hair is all eyes, cheekbones and mouth, and her voice was as annoying as the plastic cutlery you get with fast foods. But the old man is there, staring back at the boy from the wall mirror with a steady, unflinching gaze.

What’s he doing here? The boy had buried him 28 years ago in the town where he was born, where his parents were born, and where he eventually died. But there he was, staring back with tired eyes and a body that was no longer unbroken or as shiny as it once, more a roadmap of the life lived.

How have the actions of a loved one affected you?