‘The unexpected encounter I had while waiting in line’ 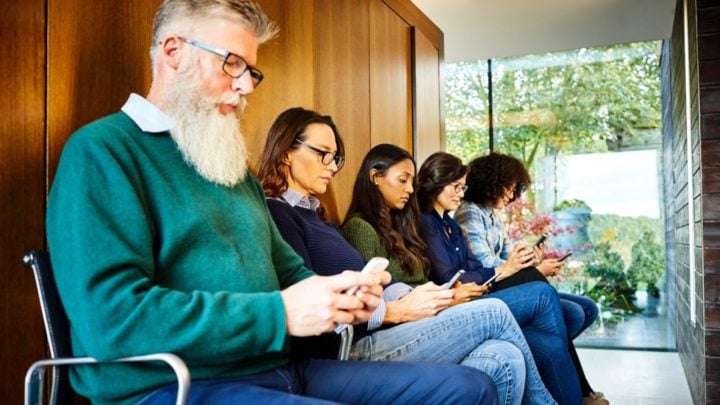 Put down your phones, turn off the television and engage with the world and the people around you, encourages Peter. Source: Getty Images

I don’t like waiting. My waiting fuse must be quite short.

In fact, lots of people don’t like waiting. Some do it for extra cash. Some avoid a queue like the plague. (There has to be a phobia that describes queue avoidance. Mental note to self: look it up. Oh, all right, Google it.)

I was waiting in a queue in a hardware store recently. (That has to be a tautology!). I had just reached the cashier when another man came up to my left and said, “Good day Mr Stanhope”. I replied similarly, “G’day.”

He allowed a small pause. “You don’t remember me, do you?”

His voice was familiar, and I half remembered a conversation I’d had with him years ago, about his time working as a used car salesman.

Another pause. He was allowing me to mentally scroll back in time, in schools and in-class rolls. I could remember many of the names of the pupils in my very first class. Haywood Public School, 1963. Rodney, Trevor, Neda, Mary, Angelica. But in this case, the face and a name could not quite match.

“The name’s Ian Thompson.” (Not his real name, I did not want his house invaded by hordes of reporters doing fact checks.)

While I did a mental comparison between a 12-year-old boy and this young man, he turned to face the lady at the computer. “This bloke was my best teacher,” he said. (So glad he hadn’t used the American ‘guy’.)

A brief conversation like this had occurred once previously, by telephone. A red-headed lady named Barbara had rung me up about something to do with school reunions.

“How on earth did you know she was a ranga if she was on the phone?” I hear you ask.

Because she was when I taught her in 3A in 1967, would be my answer. She later became a teacher herself.

But back to the queue in the hardware store. (No, it was not a supermarket chain, but a real hardware store, where people approach you with a smile and really look as if they want to help you.) I paid for my stuff and had to collect the bag of compost from the front of the store.

He lifted the bag into the boot of my car, and I thanked him while I piled the rest of the purchases beside it.

I must have looked surprised.

“I know where you live.”

“I live in the same street.”

That was not a surprise; Acacia Avenue is a really long street. People can easily become anonymous in a long street.

With that, we departed in our cars.

Mental note: forget the TV, the lawns, the busyness and disconnectedness of modern society. Go look him up. Continue the conversation. Conversations can happen anywhere. One simply has to unplug the earbuds, turn to the person sitting next door, and use the good old Aussie “G’day”.