‘The gut-wrenching moment I came face-to-face with violence’ 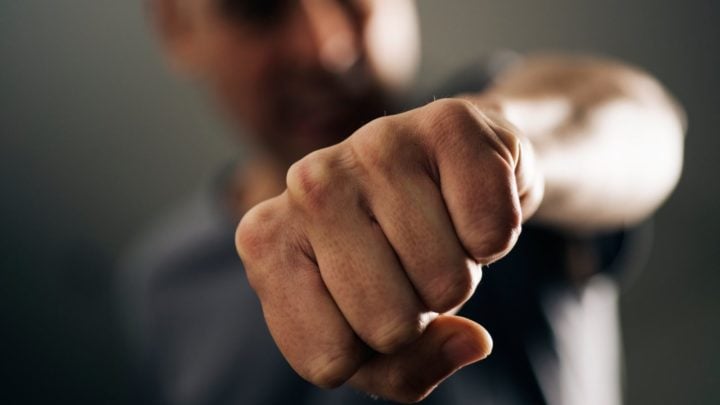 Three days ago in my local shopping centre, for the first time in my obviously sheltered life, the sights and sounds of violence ‘hit home’ right before my astonished, horrified eyes. I witnessed a fair dinkum, no holds barred, fist fight. It was gut-wrenching and I did not even know any of the protagonists. It gave me a slight insight of what it must be like to suffer at the hands of domestic violence; a lesson I’ll never forget.

Naturally, I’ve seen (predominantly male) bluster and bravado but I’ve never witnessed a bare knuckle connect to another human being’s face, observed the shock and viewed the blood spurt. There’s blood, there’s broken bones and there’s teeth … random teeth from random owners. I know this because one hit me on my forearm and fell right in front of me; horrendous.

I had just finished buying a few grocery items and had decided to wander up to my hairdresser to see if they could fit me in; in doing so as I’ve done many times before, I passed one of those gaming/video stores. My mind was a million miles away and I think I had one of those ‘thousand mile stares’ happening when, suddenly, two men came out of the store, brushed past me, struggling, one obviously trying to stop the other by grabbing at his torso.

Well, this snapped me out of my reverie quick smart however it took me a few seconds to comprehend what my eyes were ‘telling’ me and what exactly I was ‘witnessing’ just feet away. My perception and all hitherto trusted senses seemed to be failing me as I repeated to myself that “this can’t be happening”. Neither man was tall or large but the pursuer was slightly stocky; had a little meat on his bones. The other fellow was rather smallish, almost skinny, but more ‘muscle bound’ and it was he who turned and landed that first punch, the first punch I had ever seen one human give to another in ‘real life’.

The cracking, violent sound of it turned my stomach but I was frozen stiff mid-errand. I simply could not move as the fight escalated.

I have been guilty of presuming ‘gawkers’ on the news of seemingly standing by and watching some horror or other, and tut-tut-tutting their presumed garishness. Perhaps, they like me were bolted to the floor and found any movement impossible.

As I discovered later I correctly presumed this was a store owner chasing a shoplifter. It was also obvious there was a gang of three waiting for their mate outside. During the fractious, they took off. Honour among thieves? I think not.

The whole incident unnerved me, upset and shocked me and I didn’t even know any of the participants. It was only 11:30am but I admit I went home and poured a wine; then I got to thinking. Imagine if it had been my son on the receiving end of that punch. Imagine if I had known any of these people, personally. Imagine watching someone you love either dish it out or, worse still, be the recipient. In a flash I recognised how absolutely sickening domestic violence must be.

Of course I had always been a supporter of the spousal anti violence movement. I presumed I naturally understood the betrayal of a partner hitting, striking, punching, slapping, smacking … attacking … but did I?

I actually cried with the enormity of the realisation. I had never realised the extent of the horror, pain, fear, terror — the complete and utter nightmare that must manifest when someone you love ‘hits’ and disrespects you. Apologises, but then hits you again and again. Seeing a hit or a punch on TV or in the movies can never prepare you for the ‘real thing’; it’s sickening and terrifying.

To compare my silly little shopping centre ‘reality check’ to a person who has suffered abuse is almost nonsensical. However, can you please ‘understand’ that I ‘didn’t understand’ before. What this experience showed me was domestic violence survivors must be amongst the bravest people in the world. Bless you all.