‘The future of coal in Australia as I see it’ 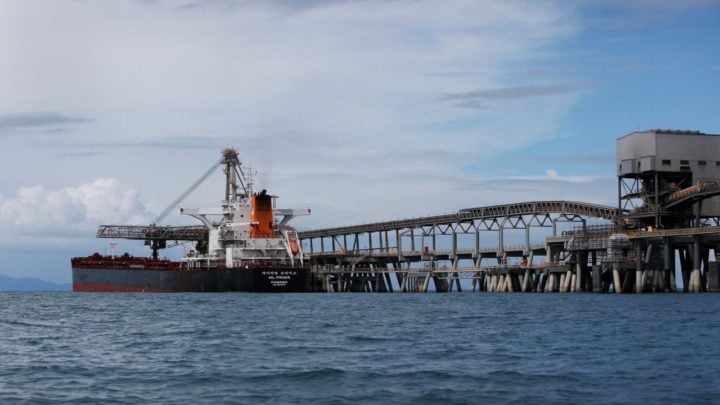 The Abbot Point coal export terminal is located 25 kilometers north of Bowen, Queensland is Australia's most northerly port. The port has a capacity of 50 million tonnes and is currently leased to Adani Enterprises of India. Source: Lisa Maree Williams/Getty Images

With the all the fuss about the proposed new coal mine in Queensland I’ve found myself asking where any climatic or global warming advantage takes place, anywhere in the world, as a result of Australia selling virtually all the coal it mines to China or India (for them to burn!) instead of keeping the coal here, building more coal-fired power stations and producing a wealth of cheap electricity for everyone in Australia to benefit from. Apparently, Australia has the technology to burn coal in a clean manner, which pumps much less carbon dioxide into the atmosphere than the power stations it fuels at present in Asia. Power stations that are apparently being built at a rate of several hundred a year over there, where — I would guess — Australia would only need to build about a dozen to supply the whole country.

By keeping the coal in Australia we would also avoid the hazard, which I understand is a major one concerning the new Queensland mine, of doing major damage to the Great Barrier Reef (undoubtedly one of this country’s greatest assets), with large ships sailing in and out of the area no longer required. I can just imagine, without trying to be a scaremonger, what a disaster it would be if one of those leviathans were to run aground and spill a few million litres of fuel all over the place, killing not only the reef itself, but also the abundant sea life that lives there. I have seen for myself what damage can be caused by the accumulation of lost coal-dust that would inevitably be in evidence — there are parts of the east coast of Britain where the water is completely blackened by the stuff, which again can’t be very healthy for the wildlife there.

So far I have been concentrating on Queensland, but there are other parts of Australia where coal is the lifeblood of the area. Take for instance the Latrobe Valley in the Gippsland area of Victoria. Most of that area is a vast accumulation of soft coal, not in narrow veins like the anthracite variety of coal, but solid coal from about 10 meters below the surface to a depth of about 450m.

Several power stations were built, years ago, to make use of the very available supply and although one has now closed down, electricity is still being generated there by several other stations. I went to one of the mines that dig the coal some years ago and I was told that the power generated since the stations were built — working 24 hours a day since they were commissioned in the 1980s — had consumed something like 2 per cent of the available fuel! My mind boggles, not only at the amount of coal there is, but at what the size and time scale of growth must have been millions of years ago, to convert ancient forest into this gigantic pool of usable coal. That must have been some forest, in its day!

Of course, one of the major advantages of coal-burning power stations is that they can operate 24 hours a day (cheaply), whereas the two other main source — wind farms and photo-electric panels — are very much reliant on the vagaries of weather, sunlight and time of day; important when we haven’t really worked out satisfactory ways of storing the electricity, once it has been generated, apart from very large, very expensive batteries.

I’m pretty sure I am in a minority here, but I still think coal has its place in our midst, especially, as I say, with the modern, clean ways it can now be burned. With a minimum of CO2 being released, it should all add up to a profitable situation for the Australian taxpayer!

What are your thoughts on coal mining and coal power? What is your solution to the energy situation?