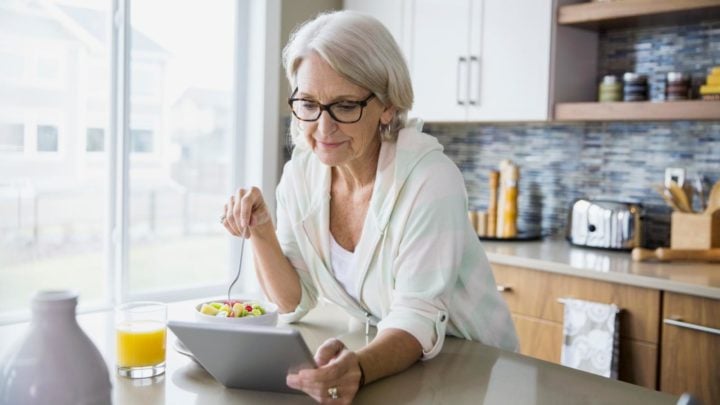 Hours spent on social media might be seen as a 'waste' for some, but not Robyn. (Photograph posed by model) Source: Getty Images

It was Sunday, March 3 and I was having an extraordinary afternoon. First it had been all about Facebook and old memories and second, I focused on my grandfather and the friends I knew from 50 years ago.

It was interesting to see a post on social media of a yacht being launched. It was called the Buccaneer and was painted black (which was unusual at the time, 1968) — a great day for the yachting community. It was owned by my grandfather’s godson Tom Clark (who was knighted before he passed away) and the yacht was 72-feet (22 metres) long and called an A-class yacht.

This yacht used to sail around the Auckland gulf and up to an island off the Warkworth coast called Kawhau Island (home to Sir George Grey in the 1800s). It was a beautiful dark-watered cove with a ferry landing. There used to be many yachts come into the bay and a number of day trippers from the mainland to the island for sightseeing.

These yachts used to race from the city to Kawhau on a Friday night, and usually the Buccaneer was the first into the bay. There were lots of various sized boats, but most were the big A-class ones. It was stunning to see them all anchored. Lots of guys would be laughing and drinking until they rowed onto the beach and there would be a line of dinghies awaiting their owners for the trip back. They would all be drinking in a bar with the most amazing tented type ceiling and also some boaties would eat dinner at the old Mansion House, which had been converted into a hotel with some motel type units attached to the back. It is today a heritage site.

I remember lots of merriment was had by the boaties and there were often no women to speak of — it was truly a boys weekend away from the ladies. My mother and I would travel up and park our car in the ferry carpark and go over on a Saturday morning to be there for the Saturday night festivities. They were quite interesting as everyone got totally drunk — even my mother would have at least one drink (she was called a mantlepiece drinker as she only ever took one drink) and I was only 18 or so and could not partake — you had to be 21 to drink back then. I’m sure some of the boys off the boats were not 21, but they used to play up and drink as well as their skippers.

Seeing that photo on Facebook of the launching of the Buccaneer took me right back to those weekends with my mother and made me feel quite sad, but happy that I had been able to do and see all that at my age. I used to be a good swimmer and as my mother knew quite a few of the skippers I got to jump off the yachts into the bay. It was quite deep but always a very dark green. We all used to say it was that colour from the thousands of beer bottles that had been chucked overboard during the festivities.

The owner of the Buccaneer knew us well. Tom worked for my father at his company as a young lad. Such is the strength of this nostalgia, that I remembered I’d had an outdoor plant pot made by Tom’s father at the Amalgamated Brick & Pipe Co. Ltd. here in Auckland. It dates back to the 1930s. I took a photograph of the pot and put it on Facebook as a bit of a laugh.

The posting of the photograph has had a great number of likes and quite a few comments. It’s an amazing pot, brown and yellow swirled leaves with a bowl on a waist like an over sized urn. Its quite unique and I am very lucky to still have it in tact after all these years. It was part of a wedding present to my parents when they got married in 1930 — they also got a considerable amount of bricks from the company and their house was built of brick and tile. I was born in 1949 and my brother had been born in 1931, so the house has had a significant history. I have always been meaning to give the original photographs to the current owners — its on my bucket list and I think I had better get a bit of a move on.

For the first time in my social media history, I had two things to talk about and make comments on. The time I spent reflecting and sharing my thoughts with others took the better part of a day. I wouldn’t consider it a waste of time because it took me to places I had forgotten. I was feeling so bright and happy at the end, I’d consider it a worthwhile experience.

Do you get lost in nostalgia? How much time do you spend on social media?