‘Rise of the machines: From Roneo to robots, it’s been one hell of a journey’ 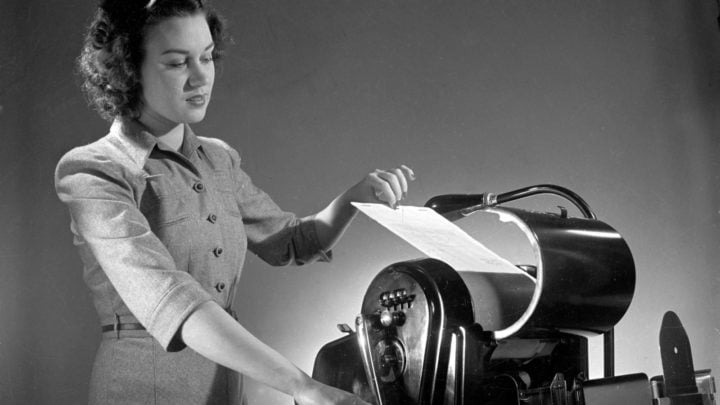 Remember the Roneo? You could make hundreds of copies! Source: Getty Images

Prior to leaving high school in 1969, the administration office used a machine that drove we students mad — the dreaded Gestetner or Roneo machine. Do you remember this infernal machine that reproduced worksheets and documents in wishy-washy purple ink? I can still recall typing stencils for it, and the smell!

After leaving school, my first job in 1970 was a stenographer (shorthand/typist) but I recall being fascinated by the office receptionist using a plug and cord switchboard. I would watch her eagle-eyed as she connected outside calls to office phones, using the switches to make them ring; and plugging a cord into an extension to give someone an ‘outside line’. “I can do that” I thought, “it’s not that hard”. I did, finally escaping the boredom of the steno pool and landing in the front office.

Moving into other jobs, I gained a wealth of experience in the ever-increasing modern technology that was flooding the business realm, like the Telex.

Telex exchanges were entirely separate from a telephone system, with their own signalling standards, exchanges and system of ‘telex numbers’. Any customer on a telex exchange could deliver messages to any other in the world.

To reduce line usage and cost, telex messages were encoded onto a thin paper tape incorporating a five-hole punch and a reader. Once the paper tape had been prepared, the message could be transmitted in minimum time, at any time.

It seemed back then, and actually still does, that technology introduction grew faster each year and it took a lot of employer investment in training staff to keep up with it all.

In the 1970s, photocopiers ate men’s ties and covered hapless workers in a cloud of toner when refills were required. The obligatory Xerox went from clunky to spunky, from single-sided A4 and black print only, to choose what you want — black and white, grey, colour, A4, A3, portrait, landscape, double sided, image shift, booklet, stapled (top left, right, double); and on it went.

One photocopier I had to be trained on took weeks! It had a footprint the size of my dining room and kitchen combined. Unfortunately it didn’t make coffee or do dishes but pretty much did everything else!

The telephone became push button instead of rotary. Hell, phones became mobile — a great house-brick with an aerial poking out the top.

There’s no need to relate that metamorphosis, we all know it well, but interesting how it went the opposite of the photocopier. Phones became so small our big fat fingers couldn’t operate them, so the stylus was re-invoked from centuries ago. A fiddly business and not popular!

The manual typewriter grew up to become the IBM golf-ball typewriter with its bevvy of fonts on different click-in/click-out balls, all in a presentation case. Then, in the blink of an eye, that was replaced by the Daisy Wheel version.

After that, I had to learn the facsimile machine (some are still operating today), then came training for the ‘newly-imported from Switzerland’, Hermes memory typewriter, which required coding to be stored on another new format, the compact disc.

In the 1980s, my life, and the world with it, transformed, because this machine was the embryo of the desktop personal computer.

After that in rapid succession, computer hard drives usually housed in a building miniaturised to become ‘desktop’. From learning DOS, the techno codes to run computer functionality, we were plunged into a world of the mouse, hardware and software. Hmmm, software. So much software!

The company I worked for in the early-’90s wanted more graphics oomph to accompany Microsoft Office, so I was off for more training to learn Harvard Graphics, Ventura and Corel Draw.

It is an absolute miracle that I have reached my mid-60s and can still speak the Queen’s English!

As I finish this article and shut down the PC, I wonder about the robots that have worked behind the scenes in the industry for years, like car manufacturers or even your local 10-Pin bowling alley. These days people just say: “Alexa, please turn off the office lights and lock doors”. My techno-light finally went off the day I ‘retired’ and I couldn’t be more pleased!

What changes have you had to embrace during your working life?