‘Redundancy, no savings and ongoing illness have us living on a knife’s edge’ 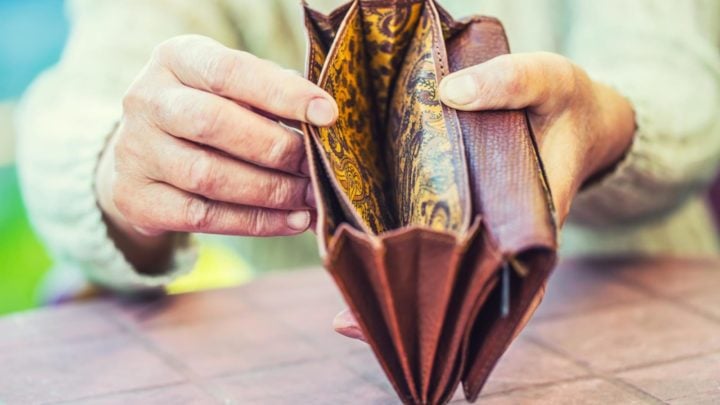 Financial hardship and ill health have this writer and her husband living on a knife's edge. Source: Getty Images

My story is quite long and involved, but writing it has been cathartic. This is all over a period of 10 years. I am about to turn 76 and am so lucky to still be here. Our life is so limited and I find I have a battle with depression and tiredness, but on a good day everything is good!

My husband had a solid job with great prospects. We travelled, lived in New Zealand for two years, went to the best restaurants and attended many opening nights at the opera.

I was a stay-at-home-mum with four children until they were in their teens at which time I took up part-time work as a medical receptionist and I loved it.

On our return from NZ the company my husband worked for changed hands. Our retirement prospects also then changed and my husband was retrenched on a much altered payout. He was happy to continue working and we realised that retirement would be set back; he would be working longer. That was fine.

I became ill with a blood cancer and was given six weeks to live! My husband stayed by my side throughout the ordeal. He slept in a camp bed by my side for weeks on end. His intention was to find work after my treatment.

My treatment and hospitalisation (sometimes for weeks at a time) continued for five years. He worked from home on a commission basis and was paid nothing. By the time I was well enough for my husband to work, he was afflicted with hip disease, in constant pain and barely able to walk.

All this time we were living off our superannuation payout, which wasn’t great, and borrowing against our home, which we were still paying off. The bank happily offered us money until it one day called it all in. We had to sell our house and rent.

We still thought my husband could return to some form of work once his hips were treated. Two hip surgeries later (done three months apart because of severity), his rehabilitation was hampered by the impact of the inability to recover from the first surgery. Twelve months later, after he was continually unwell, he was operated on for a hernia that had been partially blocked and was a lingering infection.

We had to downsize our rental to an apartment as we couldn’t afford it any longer. We were now existing on the pension alone. No home ownership super or savings.

When my husband finally was able to return to work, he got a job as a taxi driver. He loved it and we had a little extra coming in after four months.

I noticed he was getting tired and was not putting in the necessary hours. Suddenly my husband was having chemotherapy for a deadly blood cancer. I couldn’t believe it was happening to the two of us! I had recovered, but was left with compromised health and now here he was in almost the same position.

We had lost our private health cover a long time ago. However, the public system had cared for us well. We felt lucky to have such a health system.

Our teeth were badly affected by treatment and our dentist who been been treating us at no charge out of friendship retired. Again the public system took us up and dealt with our problems.

Two months ago, my husband suffered two strokes. Thankfully there were no obvious effects, but depression and anxiety are now existent.

Our rental goes up every six months. We are at our limit as my whole pension now pays for rent. We live off my husband’s pension. We are surviving, but we’re on a knife’s edge.

Forget holidays or entertaining, the movies are usually out of reach and even a coffee requires careful consideration. Birthday presents or treats for grandchildren are my greatest pressure and disappointment. Not being able to by a pot plant or reupholster a chair because we cannot afford the material — these are things others take for granted!

Our situation is just plain old bad luck. Our health broke down at the wrong end of our lives. Everyone has a different journey and I’m lucky to have supportive family and friends who have helped support us through the tough times.

We paid our taxes. We contributed to society. We had good lives. It upsets me when I see or hear of pensioners who own their own homes and still find something to complain about with the system. Even with everything that has happened to my husband and I, I have few regrets and am grateful for the experiences I’ve had in my life.

Is this a situation you can relate to? What messages of support do you have for someone who is doing it tough?