‘Palliative care changed our lives during my husband’s final days’ 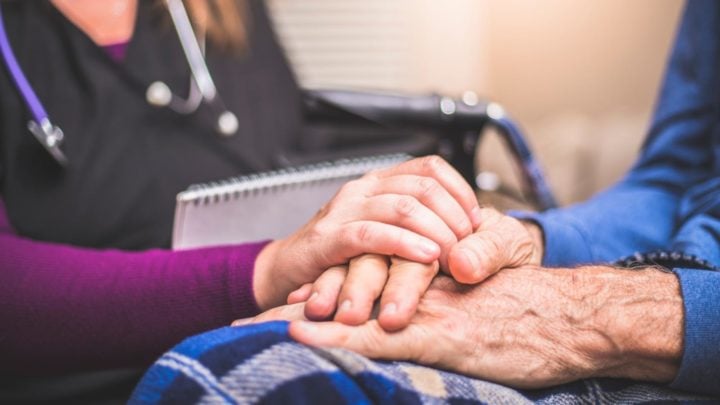 "‘Pall Care’ as we called the team, was our life saver," Annie says of the support she received during her husband's final days. Source: Getty Images

It was a plain ordinary Sunday. ‘Church’ for us started with the Insiders on the ABC at 9am, and afterwards I decided on a stroll around the retirement village we were living in. My husband Rob was downloading the latest Icelandic thriller from some obscure site in the ether and when I returned I began to set the table for seven friends who were sharing the dinner and the evening at our home.

It was around noon and Rob had retired to the second bedroom when he suddenly emerged looking slightly flushed and grimacing while rubbing his abdomen. Certainly he had been losing weight during these last weeks but he was keen to slim down so he had been quite pleased with the results.

“I suddenly feel clammy and my stomach feels bloated,” he said quietly. “I don’t feel like food. I think I’ll just have a rest.”

He rarely complained, but I had guests to feed that night so I was well into sorting out food and drinks and table settings. We tossed up whether to call off the evening as the afternoon progressed and he didn’t appear to be improving, but Rob said no and the dinner went ahead without him.

Monday arrived and Rob took himself off to the doctor to have his abdomen checked out and, as a precaution, his doctor sent him for an X-ray.

I picked up my mobile phone. It was ringing insistently.

“Hi, I’ve been sent to the Emergency Centre at the hospital,” Rob said. “They want me to have further scans. They’ve detected a ‘mass’.”

First sign of a change in tone. Until then, no anxiety, no concerns. I recounted the conversation to Cathy our daughter in Melbourne who told me: “Go straight up to the hospital. He may need you there!”

I climbed into the car and scuttled off to Bendigo Health, the brand new beautiful local hospital. Rob was sitting up dressed in a hospital gown, waiting for more scans and examinations. We had no idea what was going on. Nobody seemed keen to tell us anything until they had a clearer picture about what was actually happening inside this 81-year-old body.

They suspected a bowel blockage and it was suggested that I go home, have a good night’s sleep and return the next morning.

I went home, but I didn’t sleep. I parked early the next morning and found Rob still waiting, calm and philosophical as they prodded and probed.

It was early July and very cold. We’re waiting news of the birth of our 10th grandchild and had plans to drive down on Wednesday morning to meet her for the first time. The teddy was already wrapped and ready.

Audrey was born in Melbourne as planned on Tuesday morning. Delight all around and this baby girl brought so much joy with her during those increasingly anxious hours.

On Tuesday evening the team of young interns appeared, clutching a collection of X-rays and reports. They gathered around Rob’s bed and told us “this is a pancreatic tumour”. It was the worst case scenario.

They told us it would mean an operation, if possible, and they were leaving it all in the hands of a pancreatic surgeon who would see Rob the following week in Bendigo.

Rob says quietly to me when they have gone “One in, one out”. I think we knew then that this was a death sentence, and so it proved to be.

Rob came home with me the next morning. We were already beginning to fall through the cracks in this system. My husband had been given an appalling diagnosis and we left that hospital without one support service in place other than an appointment in eight days time. Rob wasn’t even given a prescription, which would have helped his pancreas to absorb food, something it had clearly not been doing for some time. The prescription for Creon capsules was only provided three weeks later, followed by dietary supplements.

How fortunate that we had a daughter who was a pharmacist. Her knowledge and support over the next five months would be invaluable, as would our occupational therapist daughter, our physiotherapist daughter-in-law and our new mother who brought her baby daughter with her every week during the following months, all of them travelling from Melbourne, and our son who visited every week from Macedon. We had plenty of health professionals to help us through those dark days and months. How many people are out there who are not so fortunate?

I rang Rob’s GP. He could not have been less interested. “Oh” (vaguely) “let me know if you need anything”. What did we need? We had no idea but it was obvious he wasn’t interested in helping Rob, despite having being Rob’s doctor for several years.

We eventually met the pancreatic surgeon who walked briskly into the room where Rob and I were patiently waiting to meet this famous specialist. He had obviously studied the X-rays and scans and already knew the outcome. He announced the tumour inoperable, untreatable and incurable and there was nothing further that could be done for Rob. He would refer Rob to his offsider in the Epworth who would perform a biopsy on the tumour, a seemingly very difficult task, which would simply confirm his diagnosis.

The only question he deigned to ask us was whether we were private or public patients. We had always kept up our private insurance cover. He immediately advised us that in that case Rob’s biopsy could be done the following week at the Epworth, rather than in three weeks time if we were public patients. (Those results were indeed confirmed as he predicted.) We were left sitting in the room alone at the clinic after he sailed loftily out, looking at each other in bewilderment.

Then, into the picture stepped a local oncologist who had been contacted by the pancreatic surgeon. We were forever grateful that we were connected to the compassionate and very professional oncologist Rob B who guided us carefully through the serious decisions we needed to make in terms of treatment.

It was through Rob B that we were connected to a palliative care team who then stepped in, changing our lives so much for the better. This team was with us every step of the way after our initial meeting, becoming our guides, our carers and our friends during for five months as the cancer took over Rob’s wellbeing.

Throughout all that time this team shadowed us, watched over us, cared for and about us, proving themselves invaluable. They were honest, answered all our questions and never baulked from an honest answer to the most difficult questions.

The three very qualified nurses were regular visitors to our home and Rob and I looked forward to their visits. The occupational therapist arranged for various pieces of furniture to be delivered, including a hospital bed, commode and wheelchair. The social worker gave me support in filling out the various forms when applying for a carer’s pension and gave me time to talk through the issues involved in managing a very ill patient. Overall was the doctor who supervised the various staff and was also available to speak with and answer the questions as palliative care treatment increased.

It was a well-oiled machine. They were managing a number of families at the same time. The aim was to allow the patient and their family to die at home, if that was their wish.

It was certainly Rob’s wish that we were able to keep him at home. With the amazing support of two of our daughters who moved in to our home, leaving their families in the care of their dads, in the last week they cared for their dad so beautifully, with my help. I could never have managed that last week on my own.

We had regular visits from community nurses who are also part of this wonderful service. They came every second day to sponge and wash Rob.

‘Pall Care’ as we called the team, was our life saver. The challenge in the health system today is not so much in introducing a program such as Rob and I were fortunate enough to access but to continue to fund the program after the initial trials. It is sometimes criticised for appearing to be expensive because it offers a whole team approach. In fact it is far more cost-effective than Rob taking up a hospital bed for the last weeks of his life. A hospital bed costs up to $2,000 a day. It is a much cheaper option to provide the necessary services to the patient in their own home where they are at their most relaxed and comfortable. The support the team give to a family is incalculable.

I have no wish to describe the months I watched my lovely man slowly lose his fight to live. We were married for 54 years. He is with me every day and he is my last memory at night and my first thought in the morning. He was stoic and philosophical in facing his death. “It is what it is,” he would say, when I felt like raging into the dark night. He made the dying easy for us as we travelled the journey with him. He loved having his children visit him although many times he slept while they were with us. It mattered not, he knew they were there. In that last week when his girls cared for him so lovingly I am sure he knew they were with him. He may have appeared deeply asleep but he knew he was surrounded with our love. Of that I am sure.

I asked Rob in those last weeks whether, given the new Dying with Dignity legislation is due in June/July, he would consider choosing that option. His reply was: “In a heartbeat but I am a year too early”.

Have you had to access palliative care or other support services to assist with the care of a loved one? What are your thoughts on euthanasia for terminally ill patients?