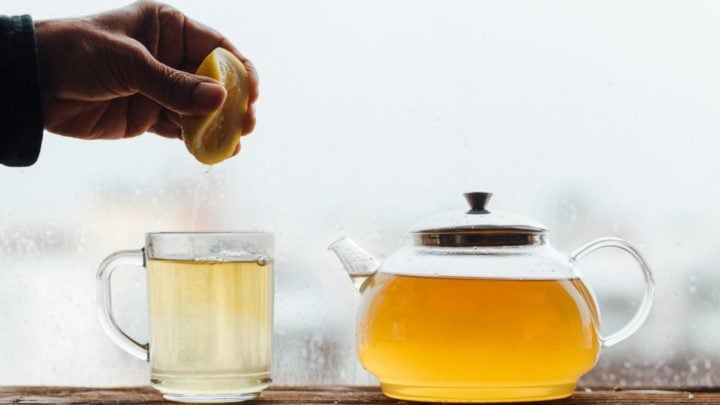 'Hot toddy and some aspirin. Is that it?' thought Julie. Source: Getty Images

Once, far away in time and long ago, it was a cold, sodden Melbourne day of pouring rain. A newlywed at the time, I arrived after work at my new local doctor’s office, presenting with a heavy cold, stuffy nose, raw sore throat, blocked ears and a chesty cough.

My new GP checked my symptoms. I asked if I needed antibiotics, as I am allergic to penicillin. Did that set him off! He launched into an educational rant about how any virus does not respond to antibiotics. He gave me his ‘script’ for a remedy for my cold and flu blues.

“Go home, rest in bed, stay in the warm. Get some Vicks VapoRub and apply that to your chest.” Right, I thought, that sounds just like my mother and my nanna talking. “Then, in a cocktail shaker, make yourself a hot toddy, heavy on the toddy.” I looked bewildered. “Whisky, hot water, lemon juice and sugar or honey. Mix well. Drink some every two hours, with two aspirin. By tomorrow, your flu will be gone.”

Home I went, through the rain. I switched on the heater and my electric blanket. I applied Vicks VapoRub, found some aspirin. I come from a teetotal family and had never drunk much alcohol, but I purloined my husband’s bottle of best Johnny Walker Red label and mixed my hot toddy.

I decided I did not like the taste overly much, but I persevered. He was the doctor, I was only a teacher. I guess I learned something. Was this a placebo or a cure, I wondered. Totally viral, I took myself, my flask of hot toddy, the packet of aspirin, and applied the remedy every two hours as prescribed by my doctor. I lay in bed, listening to the rain, as the ceiling was sort of rotating. I felt snug as a bug. My little cats curled up beside me. This brought new meaning to ‘home alone’. But, hey, this was medicine at its best!

Eleven hours later, I awoke. No flu! But I had a massive hangover and an empty flask of hot toddy. I discovered my bridegroom having his morning coffee, which I usually made for him. He was furious. He had arrived home to no hot dinner, an unresponsive wife, and only an empty bottle of grog.

That was medicine in the ‘old-fashioned way’. With a later virus, I learned that half a bottle of grappa also did the trick. Hangover, but no flu! I must say I do not like alcohol or its effects. I leave drunks to their own devices. Sometimes, when stricken with a winter cold or flu, I hanker for a good hot toddy, in the ‘old-fashioned way’! Where is that bottle shop?

Have you got any tried and tested old-fashioned remedies? Share them with us.