‘I’ll never forget when the nuns took us to Woodstock’ 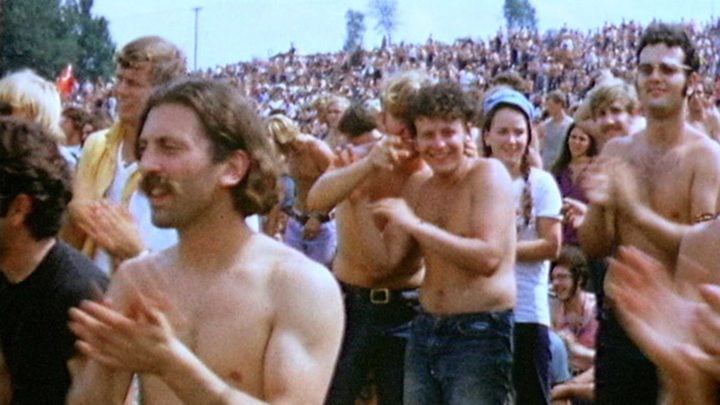 Part of the crowd on the first day of Woodstock in 1969. Source: Derek Redmond and Paul Campbell - Own work, CC BY-SA 3.0 / Wikipedia

In 1969 I was 16 years old. I was a feisty, rebellious, pouting, gym-slipped schoolgirl who questioned everything my parents, the priests and the nuns at my stifling bricked monolith of a convent told me. I was bursting to be the ‘me’ that I knew lurked behind the scratchy serge uniform and the ugly battered panama hat.

The world was changing, music was changing. I loved the advent of the rock music that hit the shores of New Zealand a bit later than other countries got it, but we did get it. I had a flower child in me yearning to be let loose.

My first album was Cream’s In the White Room. I played it over and over on Mum and Dad’s record player in the front room. Mum yelled at me to “turn that terrible music off”, but I was sold. No turning back. We teenagers heard about the Woodstock Festival in 1969 in upstate New York. More than half a million teenagers descended on ‘Yasger’s Farm’ in an unprecedented surge of young people wanting to hear the new rock sounds coming out. I saw photos in the paper and that was it. How I wished we could have been there.

I was stunned when one morning at school, one of the nuns told us that we were going to the pictures for cultural studies, and we were going to see the movie Woodstock. I was astounded, as were the groovier of my friends. As sheltered, stifled convent school girls in a single sex school, and as the third girl in a family of girls, I had an inkling we were going to see something quite revolutionary.

Obviously the nuns had not researched the content of the movie. We all sat expectantly in the front rows. Damp smelling serge gym slips and teenage girl sweat and the dust from the velvet curtains. The place went dark, the curtain rolled back and it was all happening. A visual feast for this girl closeted by family standards and heavily imposed religion. The music pounded out, my soul was watered by the sounds. Writhing flower people danced in a sea of mud. I was deeply moved. Suddenly, a hitherto unseen sight flashed on the screen. A man with a patch of something dark and something dangling between his legs. I’d never seen a naked man so was having a good look, when the accompanying nun screamed: “Girls, cover your eyes, cover your eyes!” Of course we didn’t cover our eyes.

I think movies were taken off the syllabus after that, but Woodstock fed my love for the new music, the beat of freedom and the yearning to find my own identity. Jimi Hendrix, Jefferson airplane and so many other bands imprinted themselves on me that day. Some would look at Woodstock as being tame these days, but for me, it was the beginning of all that was going to be possible.

Where were you in 1969? What do you know of Woodstock?