‘Enjoying a movie (or maybe something more) at the drive-in’ 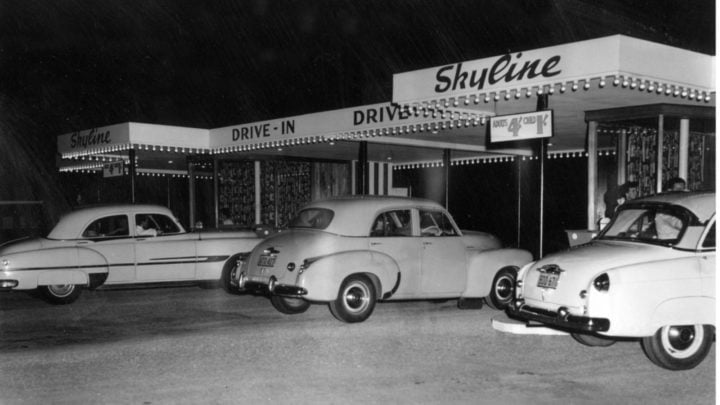 Do you remember the drive-in movie theatre? I certainly do! It’s a pity they are almost obsolete today.

Australia’s first drive-in theatre was opened in Burwood, Melbourne, in 1954. I remember the first time I went to the drive-in. It would have been about 1959, when the nearest drive-in to us opened. There was much excitement in the community.

Mum and Dad and all five of us kids piled into the family’s Ford Customline and off we went. It was opening night and the queue to get in the gate was about a mile long.

I think we nearly sent Mum batty with all our whinging and moaning about having to wait in line for so long. We came from a farm, so this was quite a foreign event for a mob of unruly kids.

I remember we all had our pyjamas on, probably so we wouldn’t get out of the car. It was a bit shameful to be seen in public in ones pyjamas back then. Good move Mum.

My younger brother kept letting off some deadly farts. I reckon he must have been nervous or something. That performance led to his nickname ‘Skunk’.

My little sister wanted something to eat and kept harping in Dad’s ear for him to go and buy some chocolate. My older sister kept pinching me and my older brother would biff her in the ear each time she did so.

Somehow Mum kept her cool. Dad disappeared into the night and didn’t come back for ages. Truth be known it was probably only 5 minutes, but it seemed like forever.

We waited in eager anticipation and after what seemed like an eternity, the newsreel came on. We watched in fascination, marvelling at the fact we could see the movie and also hear it through the little box Dad had hooked on the car window.

I remember the movie was called Genevieve, a British comedy about two friends entering an antique car rally. It starred Kenneth More and Kay Kendall.

The two friends were Alan McKim (played by John Gregson) and Ambrose Claverhouse (More). Alan has a vintage 1904 automobile by the name of Genevieve, while Ambrose had a more modern Spyker. They (and their wives, played by Dinah Sheridan and Kendall) were taking part in the annual London to Brighton car rally. After much hilarity and dirty tricks being played, of course the older car won the race. That is all I remember … I was only 11 at the time.

Many a Saturday night was spent at the drive-in. Many a local child was conceived there too!

When I moved to Melbourne in the mid-1960s, there was an abundance of drive-in theatres to choose from. It was the place to go and most of the car windows were heavy with fog from all the activities that went on inside the car. It was a safe place to go ‘parking’.

I don’t remember any of my friends actually watching a movie. There was too much hanky panky going on.

There were no drugs and alcohol was banned so it was all just good clean fun. The kids of today don’t know what they are missing!

Do you remember your first drive-in theatre experience?