The rise and fall of hemlines: ‘You were a fallen woman if your hem was crooked’ 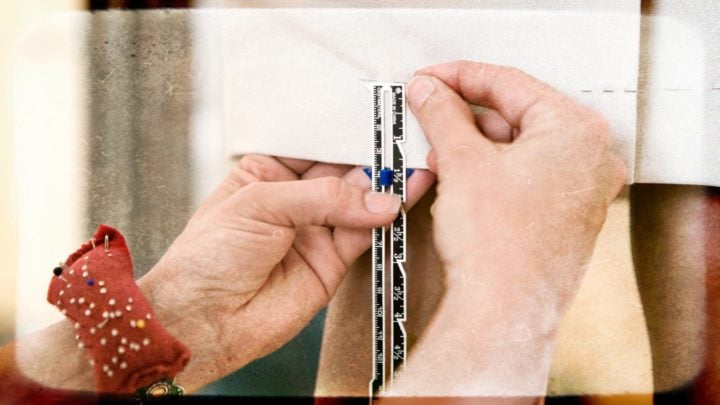 Who remembers having to stand and have their hem measured? Source: Getty Images

Do you remember when hems had to be straight? No dips, no curves. You were a fallen woman if your hem was crooked. As a child I wondered what a fallen woman was and kept looking for leaning women with daggy hems, but didn’t find one.

We made most of our own clothes back then and so to achieve the wonder of a straight hem, I had to climb onto the dining room table and slowly rotate while Mum, with pins in her mouth and a wooden ruler (which stood up by itself and had inch markings), turned up the fabric. That was only the beginning.

Then we did the whole thing again adjusting any fabric that refused to look straight. Next came tacking and then we repeated the process. It could take as many as three gos. Now before all this Mum fortified herself with a Vincent’s APC (aspirin-phenacetin-caffeine), which became a ritual. “It’s your day, don’t share it with a headache.”

She opened the little paper carefully and arranged it so that the pink powder tipped into her mouth to be washed down with a cuppa. “Take Vincent’s with confidence,” roared the advertisement. In 1979 Vincent’s was banned due to adverse effects like kidney damage and cancer! Later on in life she moved on to Relaxatabs, which were fashionable among housewives of the era. Ah, but that’s another story.

My dresses were lovely and I wish I had kept a bit of fabric from each one. They would have made a wonderful patchwork quilt. My tennis dresses were such a joy so that when I lost 6-0,6-0 in my first competition, at least I looked okay for a skinny kid. Come to think of it most of us were skinny kids back then.

That tennis dress had little flecks of gold thread embedded in tiny squares and we wore ‘Gorgeous Gussie’ knickers with millions of frills. I had another favourite tennis dress made of voile and looked a bit like a tutu. It was the closest I got to being a ballerina.

Cutting out patterns was usually a two Vincent job. There was much sighing and many cups of tea. We’d carefully read the pattern then arrange the fabric on the dining room table, pin the pieces to the fabric, drink more tea, check again and then cut! Once I had a bought dress, which was white organdie with red ribbon threaded round the hem and neckline. It didn’t occur to us to remove the ribbon before we washed it and the red ran and the dress was a disaster.

Later on I made my own dresses. What fun looking through the giant books of patterns — Butterick, Vogue or McCalls. At school we learned to draft our own patterns and I made a dress for the Leaving Certificate, which we had to model. Mine was a straight sleeveless dress in salmon-coloured linen. The sewing teacher was horrified at how I looked. I wasn’t quite 16 and was remarkably shapeless.

“You look like a skinned rabbit,” she declared and set about making a brown paisley sort of cummerbund, which sort of broke up the hideous pink streak of me!

I have friends who attended schools that were very fussy about hems. Their uniforms were checked to see that the skirts weren’t too short. How embarrassing! They had to kneel and then one of those ‘stand uppy’ rulers was produced and heaven help you if your skirt wasn’t long enough. The girls put up with this, but the minute they were out of the school grounds they hitched them up in a bunch around the waist, which made them the right length as far as they were concerned.

I now look with much joy at the dresses and blouses around now. Hems? Anywhere you like will do, the wavier the better. Straight hems look so old fashioned. Need to put up the hems on your trousers? You can put that sticky stuff on and iron them and there you have it. When desperate simply cut them off. Jeans? Easy. Just rip a bit around the knees and they become so fashionable! Fallen women? Everywhere!

Did you sew your own clothes? What fashion trends have left you scratching your head, bewildered?