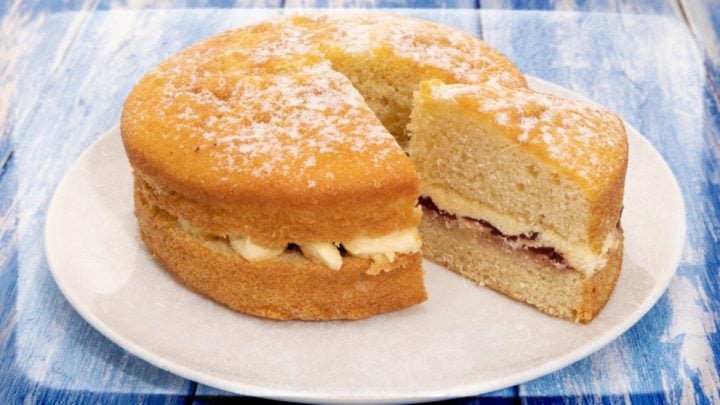 I was almost eight years old when I started cooking. I was involved in Calf Club as a child, an event in New Zealand open to rural schools and held annually much like other places have agriculture days. I didn’t want to have a calf and we didn’t have access to a lamb — they were both too much trouble and I was a bit lazy. I had tried having a calf, but didn’t have the enthusiasm for it.

I wanted to compete in the indoor section, but that didn’t suit me all that much either. There was a choice of a sand saucer or a bunch of flowers. I didn’t want to do either of those things and there was no cooking for kids. I guess they thought we were too young.

I persuaded my mother to help me with the ingredients of a sponge cake that I could enter in competition with the ladies. I doubt I’d have been old enough to even read the recipe. I must have caught her in a good mood, she was never much interested in anything I did, that was the domain of my grandmother who lived with us, but Nana was out visiting.

We set about getting everything organised, then I started to beat the eggs. The beater was ancient then, now it would be an antique, in fact it would have disintegrated, I reckon. The beaters were attached to a lid that fit perfectly on the top of an aluminium bowl, then the handle was on top of that. The eggs (or whatever) were put in the bowl, the lid was fitted tightly, then you could beat. Of course you couldn’t see what was going on under the lid.

I beat madly for the length of time my mother thought would be ‘about right’, then we took off the top and added the rest of the ingredients. I mixed it around and things looked okay, and the batter still looked okay when it went into a cake tin … Two cake tins actually, it was to be a sponge sandwich. We placed the tins into the oven for the prescribed time.

When it came out it was a dismal failure. I wont even try to describe it.

By this time, my grandmother arrived home with a glowing report of the most wonderful sponge she had ever seen or tasted, and she’d been a cook/housekeeper to Bishop Selwyn in England before she was married. She ‘knew her onions’ as the saying goes. She raved on about this cake her friend had made, then set to replicate it.

At that time, there were two brands of cornflour that you could buy. Brown and Polson, which was what we always seemed to have on hand, and Fielders. On the back of the Fielders packet was a recipe for Mrs Fielders’ famous sponge cake, the most wonderful sponge ever created.

I hung around, watching every move and when it came out of the oven I almost passed out at the sight of it. Of course I wanted to take it, instead of the miserable ‘thing’ my mother and I had made, but that was not going to happen. However, eggs were plentiful, there wasn’t much else in it, so after dinner I was allowed to recreate that wonderful vision of loveliness.

When it went into the oven, it was pale coloured, bubbly and utterly fantastic. Would it still be fantastic when it was taken out of the oven…? It was! I drooled.

The next step was to take it out of the tins. My grandmother had taught me how to put my ear near to the top and listen. If there was no crackling sound, it was cooked. I listened, no crackle, it was ready. With a minimum of help from my grandmother, the two sponges were taken out of the tins and placed carefully on a cooling rack to wait till morning to be put together with jam, and a dusting of icing sugar on the top.

There was no trouble getting me out of bed the next morning. I was anxious to get my sponge ready for display. It looked magnificent when done, now all I had to do was wait for my father to get ready to go. He was always the last to start to get ready, but most often he was the first to be ready. Then we all piled into the car. I don’t remember who had the honour of nursing my cake, probably my grandmother.

We arrived at the school grounds and I proudly carried my cake to display it among all the other cakes. I didn’t think they looked a patch on mine. I silently gloated about how wonderful mine looked.

Waiting for lunchtime and the first opportunity to inspect the entries was excruciating. I couldn’t concentrate on anything. Then at last we were allowed into the classroom that had been transformed into an exhibition hall. I raced to the section where the sponges were, and there in all it’s glory was my cake … with a first prize ticket in front of it.

Well then the questions and doubts started. All the old biddies who had not placed first were quite sure I had not made that wonderful sponge, I declared that I had, the doubts continued. I burst into tears, I was not a cheat.

My grandmother came to my rescue and informed the ladies that I had indeed produced the cake, using a recipe that her friend Mrs Hiscock had given her. She must have sounded convincing, they stopped their interrogation of me, evidently they believed her. The gloss had been taken off the day for me, but I knew I was innocent of any ill-deeds. I marched up to collect my prize at the end of the day, and the cake was taken home to be devoured for afternoon tea before the men set off to do the milking.

Did you ever win an award for something as a child? Have you ever helped your grandchildren with a competition?