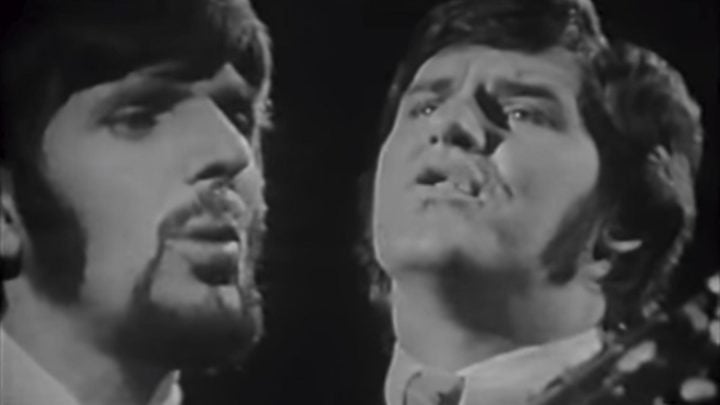 Topping the charts for five weeks in May 1966 in Australia was popular duo Bobby and Laurie with their single ‘Hitch Hiker’. Featuring Laurie Allen (vocals, guitar, keyboards) and Bobby Bright (vocals, guitar) the pair were one of the leading acts in the first wave of Australia’s ‘beat pop’ era between 1964 and 1967.

They’d joined forces in 1964 after appearing on The Go!! Show and were known for their good looks, clean cut image and sharp performances. Bobby and Laurie’s first hit single was ‘I Belong With You’ released with ‘Trouble in Mind’ in August of ’64. ‘I Belong With You’ spent two weeks in the number one spot on the Melbourne Charts.

Having hit their peak, the duo toured Australia as part of the support act for The Dave Clark Five, The Seekers and Tommy Quickly in 1965. They supported American musician PJ Proby when he toured Australia later that year. Bobby and Laurie also released three more successful singles in 1965 – ‘Someone’, ‘Judy Green’ and ‘Crazy Country Hop’.

In 1966 they changed music labels and released ‘Sweet and Tender Romance’, but it was ‘Hitch Hiker’ that gave them a national number one single. On the back of their single success, the ABC gave Bobby and Laurie their own show, It’s A Gas. However, in an effort to attract a more mature audience the show’s name changed to Dig We Must. When Bobby and Laurie lost most of their ‘teen’ appeal, the friction between the two singers increased and within a year they went their separate ways.

Also in May 1966 was the Beatles last live concert. They played a 15-minute set at the New Musical Express Poll Winners Concert at Wembley Empire Pool. For the trivia enthusiasts, the Beatles final live performance was an unscheduled performance from the roof of the Apple Building in London for the movie Let It Be.

The Mamas and the Papas start a three-week run at number one in the United States singles charts, with ‘Monday Monday’, which also reached number three in the United Kingdom and number four in Australia. Originally the group reportedly all hated the song except for its writer, John Phillips.

The Rolling Stones released ‘Paint It Black’ on May 13. It was notable for the inclusion of the distinctive sound of the classical Indian instrument the sitar, which both Brian Jones and George Harrison were popularising. They both had plans to visit India for lessons from Ravi Shankar.

The Beach Boys album Pet Sounds was released in the US.It only reached number 10 in the US but peaked at number 2 in the UK and was generally regarded as a classic, their most influential and their best LP.

In New Jersey, US, The Castiles recorded a song called ‘That’s What You Get’. It was never released and would probably have never been heard were it not for the fact that one member of the group was a 16-year-old Bruce Springstein. The Castiles are often named as the first band Springsteen played in, but in actual fact that would be The Rogues. Springsteen had been hired in 1965 as the band’s lead guitarist and it was only when he formed a new band (Earth) in 1968 that The Castiles broke up.

The first American-style open air pop concert was performed in the UK on May 30, at the Sincil Bank Football Ground, Lincoln. It was one of the earliest prototypes of the outdoor one-day rock festival. The Who top the all-star bill, which included The Small Faces, The Kinks, The Yardbirds, and Dave Dee, Dozy, Beaky, Mick and Tich.

The Number 1s in the US

The Number 1s in the UK

What musical groups were you into in 1966? Do you remember Australia’s Bobby & Laurie?