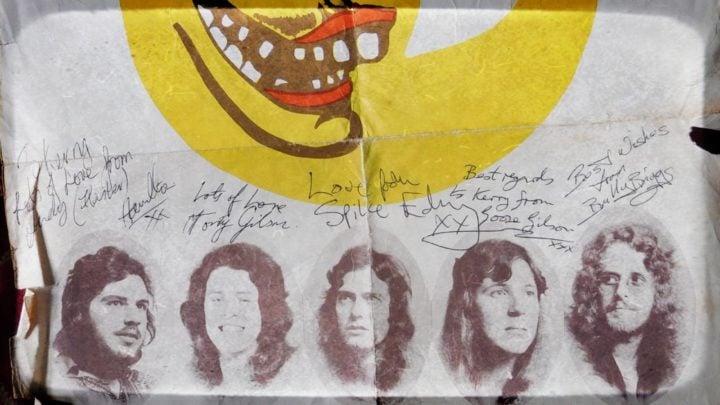 A rich architect friend of a friend threw a huge party in Devon, United Kingdom. It was the most memorable party ever! The host and I shared a birthday the same day in June, so we got a precious invite. It was a stunning place built into the side of a cliff. Some guests were allowed to camp on the top of the cliff, the grassy area that formed the roof now sprouted a few tents. The rest of the house was cleverly built into the cliff wall. His building design was incredible, he had designed it with natural rock forming the walls.

The party theme was ‘pirates’, so we dressed in the usual stuff with eye patches and parrots; (that was just the girls). I wore a sort of sarong. Some flowers round my neck and brushed my hair out in a wild style; I looked like a slightly mad islander. We arrived to find he had built a 20-foot (6-metre) replica of a pirate ship alongside the side of the pool, decks gangplank and all! Vats of curry bubbled away in cauldrons big enough to take a couple of christians, the barns were stacked with drink, and 200 people partied the night away. The local policeman was thrown in the pool when he came to tell of noise complaints, but he stayed and had a great time. When I last saw him he was cheek to cheek with a blonde.

The next morning the pool was awash with discarded underwear, bread rolls and other debris. We had curry for breakfast, a wonderful start to the day. As special guests we were shown around the house. They had a round cave for a bedroom, with a waterfall as a shower. The bed was round too, and covered in fur. To top it off, we had breakfast with the band, a group of likely lads called Smiling Hard. I still have the invitation and the poster from the band. I was drifting around on Cloud Nine for days. It was a truly memorable experience.

When it comes to memorable parties in my life, the second prize goes to… The hippie party held in a small house in our neighbourhood (when we lived in a village). This was organised for a friend by the local college. They cleared the house of furniture, erected a bus stop outside the house and scattered the place with cushions and candles. Music blasted out, and the whole street seemed transformed.

It was amazing in many ways, some I can’t properly recall, but the food served certainly left its mark. Again they served curry, and several people said afterwards the homemade poppadums remained lodged in the system for days. Neither moving up or down, like hand grenades in the gullet. We wore kaftans, strings of beads, fur waistcoats, and some guests very little underwear apparently… Not me, I’m just reporting the facts.

I do remember the music and the haze of smoke from illicit cigarettes. Luckily I didn’t need that sort of exotica I just got high on the music and the people. Just to hear the sounds of the Rolling Stones, Jimi Hendrix and others that were popular in the 1960s is something etched in my memory.

I have to be honest and say there were some stinkers! My husband used to belong to a gliding club, I was a gliding widow. He invited me to one of their parties. I would meet his fascinating flying friends. I was excited at first, as I was told it was a dinner dance. I should have been warned when I saw the band. Most of them were about 80 years old, and looked like they had already expired and were waiting for the funeral. When they played I rather wished they had expired!

The food was like something from the ‘Greasy Spoon’ and the servers whisked plates away before you had even finished. Half way through the event they showed a film on gliding.

Worst of all, we went back to someone’s house and I thought ‘At last, this might be fun’, but we then sat on dining chairs placed around the edge of the room and talked about gliding. I did go up in a glider twice, and I loved it, gliding easily outdid the rather feeble party!

I still love the idea of going to parties and my expectations often are high. I never give up; in my mind I am still a raver. All too soon my desire to be wild becomes a fading memory, by 11pm I am visibly wilting. The idea of bed and a bit of peace and quiet takes over, so with my eye makeup smeared, my feet hurting and my stomach trying to process weird food and drink, I have to give in… Well at least until the next time.

Were you a party lover in your youth? Do you remember the parties you used to go to?