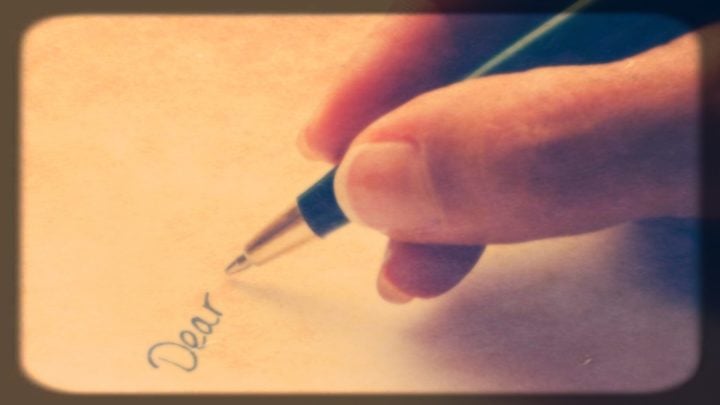 Jacqui could never really find the right way to tell her mother she'd been unwell in hospital. Source: Getty Images

‘Dear Mum…’ The pen scratched across the paper, as I tried to make sense of my thoughts, put them in order.

I wanted my mother to know, to understand, but how could I tell her? I screwed up the letter and flung it in the bin, along with others.

It was 1959. We’d been in New Zealand for two months. Letters to England take about 10 days.

It was my birthday, I’d just turned 20 and got a bed jacket from my husband, not the most romantic of presents, but useful as I was in hospital.

In the back of my mind I had known I was ill since we arrived in NZ. I had breathlessness and pain, and was not eating much. One afternoon I remember looking at my flushed face and connecting the dots, I had been nursing on an open TB ward. My symptoms of night sweats and fever, with weight loss, worried me; but surely it wasn’t possible …? I went along to the doctor, I told him about not eating and about feeling unwell. He told me in an ‘off hand’ way to go home and get a job. “You have too much time on your hands,” he said, quite sure it was all in my mind. He did however get me to have an X-ray.

A month or so later I was getting worse, feeling weaker. Then my husband went to the doctor for another reason and the doctor asked how I was doing in hospital? It transpired the results for the X-ray had got lost, but in fact confirmed I had a shadow on my lungs. I was rushed off to the hospital in Auckland.

It was a new experience; I was in a ward full of beautiful young island girls a lot of them from Rarotonga. I needed three injections a day and had six pints of fluid taken from around my lungs, then I started to feel better. I made friends with a lovely woman from Riga, Latvia, she had a more serious form of TB but we were such good friends they put us in a room together and we giggled and talked the nights away. We had parties and even a fashion show; I had just had a lot of trendy clothes sent to me by my mother in England. My husband brought the parcel in as a surprise. Mum had no idea I would not be wearing the clothes for some time.

I wrote letters to my mother every week, pretending I was cooking and shopping, telling little lies. It was hard to not confess and let her know the truth. Now and then I wrote letters explaining I was in hospital, but each letter like that got torn up or screwed up in a ball and never sent. How could I do that to her? It would take her four weeks by sea to get to me, and then four weeks back. She could ill afford it anyway. Dad was a builder and was going through tough times. Anyway, I reasoned, by the time she got to me I could be cured.

I was cured, but still on heavy drugs when I left the hospital in September, having spent eight weeks there. I would miss the open wards and the birds that flew in onto my bed to eat crumbs, I missed the friends I had made too – I suppose every experience has its merits and its down sides.

I was thrilled to be at home, with my husband at last. We had only married in January and I had spent two months away from him. Life in New Zealand had started badly. July and August we had been apart and we could hardly bare it. But life was going to be good, I knew that. I still had hope. Not long after I got home the first joyful news could be shared.

I wrote the letter, savouring the news I could send. “Dear Mum, please sit down before reading this. You are going to be a grandmother, and I expect the baby in late-May.”

It was with such joy I sent that letter off to her, but I still did not tell her of the illness. I decided it was a story for another time. Four years later, when I was back in England, when we were together again, life was almost normal, and I was nursing my third baby, I at last told her of my spell in the hospital. She agreed had she known she would have been devastated. I know I did the right thing. The deceit was for noble reasons. Mum forgave me for not telling her. She loved her grandchildren so much and could see I was healthy now. The letters I never sent were better in the bin.

Have you ever lied to your parents? How significant was your cover up?