‘I remember when TV transmissions started at 5pm’ 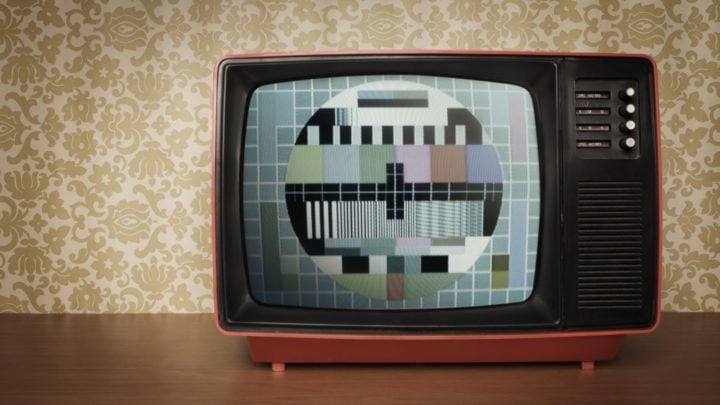 There was a time, long ago, when television broadcasts stopped and people had nothing but a fuzzy test pattern to watch. Source: Getty Images

How many of you can remember life before television? It was introduced so long ago that I can scarcely remember which year it came in. I feel it was post-1960 in New Zealand (where I’m from) because that was the year my first son was born. I remember one time, while watching some natives kill a giraffe with spears, that same son picked up one of his toys and threw it at the TV, yelling: “Don’t kill my giraffe”. He took a while to become articulate, I’m thinking he would have been about three years old before he could have yelled such a threat.

At that time we had only a short time of broadcast, from 10am we had a ‘test pattern’ and the TV installer would come and tune in the TV to receive that test pattern as perfectly as he could. Transmissions would start at 5pm. Sometimes it was still a fairly fuzzy picture, but we thought it was wonderful. The kids were enthralled with it, and there was no fear of inappropriate content at that time.

It was in black and white, too. I can’t think of anyone who would tolerate that now. We need huge screens with Smart TV, Netflix, pay TV, a method of recording so we don’t need to watch adverts, and to make it possible to watch at a time that we want to watch, not necessarily when the program is being broadcast.

I well remember being entertained by the Beverley Hillbillies, Steptoe and Son, M*A*S*H and other similar programs. Now, I wouldn’t turn on the set to watch a black and white program, and probably wouldn’t be interested in such programs that we loved 50-plus years ago.

My father was the first in our district to buy a television set and suddenly we became very popular with the neighbours, near and far. One man, Frank, who was a regular visitor was of the Bretheren faith and to own a TV was against their religious beliefs. However, Frank found numerous reasons why he had to be vacant from his family home, arriving at my parents’ home just in time to watch the evening news. He then stayed, and stayed, and stayed. I wonder how many different excuses he had to offer his wife, Noeline, who would have been waiting to serve dinner.

A must in those days was to pay a contract fee to Tisco, the NZ firm that must have pocketed thousands of dollars and were seldom called upon to come and service the TV if it went wonky. I know I was still paying that fee in the late-1980s. More than 20 years of paying to ensure I had a live screen when I wanted to watch my favourite television shows. Back then I’d turn the television on almost as soon as I got out of bed, and it was turned off at the end of the day, when I headed back to bed.

Our first TV was a small one by today’s standards. It was 21 inches. We later bought a caravan and a 13-inch TV to go in it for evening entertainment when we parked at our favourite holiday spot.

My father died in 1974 and soon after that my mother came to visit us in our new home. I was sitting watching the 13-inch TV as I caught up on some knitting. Our 21-inch set had given up the ghost. My mother told me to go and buy a colour TV and to get a decent sized screen. I couldn’t believe my luck. The Phillips K9 that replaced previous sets was amazing. The contract with Tisco continued.

Over the next 30 years the service contract was dispensed with, the newer televisions were much more reliable, and also so much cheaper.

I’m no longer a TV fanatic, in fact I hardly ever watch it these days, but I have a new technological passion. After buying a basic computer about 35 years ago, I’ve bought and sold various models. With the computer I have now, I play a version of Scrabble online and masses of computer games, engage in social media, I’ve even put my life story on it. I thought it was the bee’s knees until I got my iPad. I’ve spent hours at night on it. It’s the bomb.

Sixty years has gone in a flash. It might be a case now of ‘you can’t teach old dogs new tricks’, but I’m up for a challenge.

Do you remember when you got your first television? What were you watching on it?