‘How I spent my childhood weekends in a seaside town cafe’ 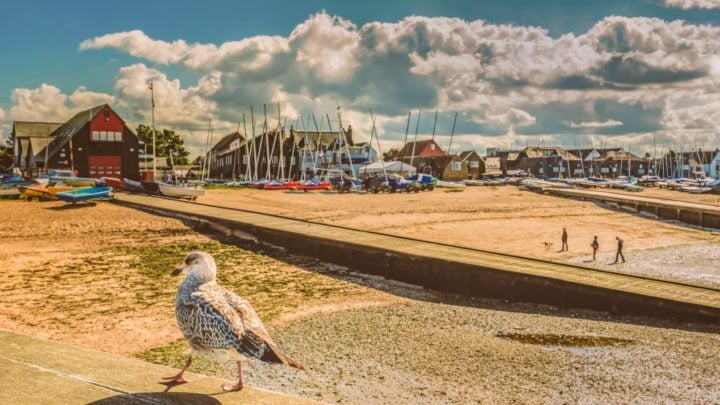 Sally remembers all the fun she had running around her father's cafe on the Isle of Sheppey, United Kingdom. Source: Getty Images

I felt very fortunate to spend my early years growing up in a seaside town on the Isle of Sheppey, which is on the south-east coast of England. My father had been a chef in the merchant navy during the war years, and after leaving the services he went into the catering business, initially in partnership, and later on his own where he owned and operated a small café. This café served a range of typical English sandwiches and fried food to a variety of regular customers and holidaying visitors to the island. My mother was one of his waiting staff, and of course they fell in love, got married and had two daughters, me and my sister Suzanne who is two years older.

We grew up spending many hours at the café, including out of school hours and weekends, especially in the summer holiday season when the island’s population more than doubled. All the caravan parks and penny arcades would be full of holiday makers, and the beaches would be lined with deckchairs, and colourful beachfront stalls selling buckets, spades, rubber rings and a variety of postcards. As a young child, my memories of the café were a combination of cooking smells from the deep fryer, waiting on tables, topping up the salt and vinegar shakers, mixing milkshakes and waiting (sometimes for what seemed like forever) in the big cupboard area out the back where we had a table, made from large cardboard boxes, and two small chairs where we could eat our own food, do our homework and read our favourite Beano and Dandy magazines.

I think my dad was a bit canny when it came to us children waiting on the tables as the punters seemed to think this was rather cute and the tips were often quite substantial, which of course all got counted and banked with the daily takings at the end of the day. My sister and I also had the task of washing dishes, which were all done by hand 50 years ago. I remember standing on a wooden box so I could reach into the big concrete tub, which held an assortment of crockery and cutlery in the piping hot soapy water, ready to be washed. The mound of detergent bubbles were always a fun drawcard, but there was no time to spend enjoying this foamy playground as we were regularly running out of clean dishes and cutlery, so time was of the essence as we washed, dried and restocked the shelves ready for the next plate of sausage, egg, chips and beans, or whatever else was up on the clipboard of orders.

Things didn’t always run smoothly and occasionally we took the wrong order to the wrong table. This is when all hell would break loose! With a cry of “Lee” or “Zanne” (for me or my sister) bellowed loudly from my father in the kitchen if orders came back from the customers, and the muffled sound of my mother apologising profusely from the front of house on our behalf, we quickly learned to get it right.

The highlight of my weekends were at the end of a busy afternoon when my dad would ask me to take his hand for a walk along the seafront. We would see how many people were still milling around on the beach and in the fairground so we could determine whether it was worthwhile staying open to cater for tea time or whether we could finish up and get home. Before closing time my sister and I would put all the chairs upside down on the edge of the café tables, and my mother would get the big metal bucket full of steaming hot water and a string mop to wash all the floors, while my dad saw to the kitchen, and more importantly counted the daily takings and recorded all the cash. I loved helping him sort the pounds and pennies, adding up the rows and rows of coins before balancing these against the numbers on paper, which put me in good stead for my future years of maths and accounting at school.

Not every weekend of my childhood was spent at the café. During the colder months we would often have Sundays off and would head away from the Isle of Sheppey to visit local Kentish castles, stately homes, parks and gardens. However, we were lucky if we made it 10 minutes to the Kingsferry Bridge, which stretched across the water from the Isle of Sheppey to the mainland, before the car sickness kicked in and the car was pulled over to the side of the road, along with the regular comment of “for goodness sake Sally we can’t take you anywhere!”

How did you spend your weekends as a child?