‘The sweet nostalgia of door-to-door salesmen and traders’ 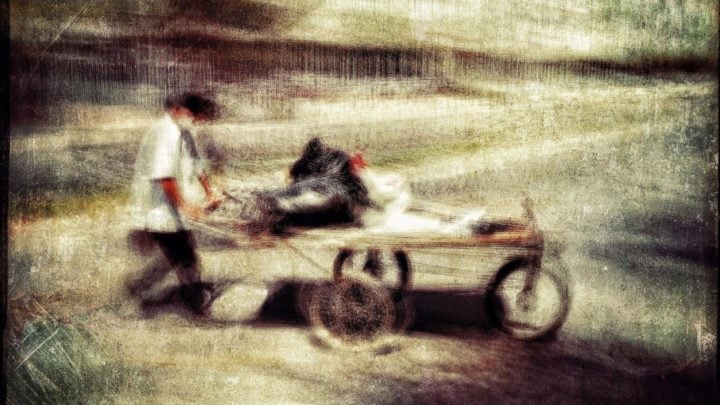 When I was six or seven, just after the war, we had multiple callers. Everyone was eager to get back to earning a living, so the opportunities to be self-employed made people work hard.

There was the ‘Prudential’ man selling insurance. Mum had a penny a week saving scheme for my brother and I, by the time we were grown up it was enough for a car or to put towards a wedding. He also sold funeral insurance and it was not as annoying as the continual adverts we see now! They all seemed like a family friend calling once a week.

The soft drinks van also came every week, I think we drank Corona and it was called Tizer, like a poor version of today’s popular drinks. We had a few bottles a week, and he collected the empties.

The man who sold linen and towels was another visitor, he sold on instalment schemes, so we paid so much a week. Mum was very sensible and liked nice linen. I also remember her saying when she was about to retire she was glad she had bought good things and kept them stocked up, it all helped when the wages stopped.

The rag and bone man, with his horse and cart and that catch cry: “Any old iron”. Women brought out scrap metal and also old rags, clothing no longer useful and broken bikes. He would sell off the useful stuff to the dealers and the cloth went to be made into new material. A few pennies paid to the housewife, which helped with the housekeeping.

Then the other horse and wagon… It was used by the milkman in the early years and we went out to get a jug filled from the supply he had in a big churn. Later this service was replaced by a new vehicle, a small electric van, purring around the houses. Also milk came in bottles.

Milkmen were always early and left the milk bottles on the step. In winter the ice made the cream rise and expand out of the top of the bottle, so we had to be fast before the birds found it.

The baker came and we could smell his beautiful bread, crusty and fresh long before he arrived. His loaves often sold out before the end of his rounds. It was a sad day when he had no doughnuts or cream buns either.

When we lived in the country we had a vegetable man who called to the house. He sold some groceries, bacon and ham too if we were lucky; his usual stock included things like tinned soup and peas. I think he decided what he needed to get rid of and hoped we would buy from his van.

Transport was not easy at that time and it helped the housewives on the edge of town. As he also sold small chocolate bars, so he was very popular. Our pet dog Bruce knew the sound and was out waiting on the pavement when the van appeared. He got a small bar of “Five Boys’ which was a little thin sweet bar and amazingly Bruce lived to a good age, even though chocolate is bad for dogs!

The coal man delivered sacks of coal either to a basement through a hatch or — if like us, it was a more modern house — to a coal bunker in the back garden. There was also a man who sold paraffin for lamps and other hardware oddments. Then of course the other hawkers like gypsies that Mum would often buy pegs from. My mother was a sucker for a story. She also made tea and gave cake to the tramps who were begging and looking for work on the farms.

Religious callers came too, of course there were Mormons and Jehovah’s Witnesses. Yes, we ended up with many copies of the Watchtower along with the encyclopaedias that no one read, from the book salesman. Mum was always nice to callers, even those she didn’t want to buy from.

The most exotic visitor to our street was the French onion man, he was seen in autumn with his strings of onions across the front and back of his bike. He usually wore a thick scarf and a beret, and was rather dashing. Perhaps I knew the French were a romantic choice even then.

There was the fish van and the ice cream van, which came with a herald of music. But the fish van just beeped his horn. We bought cockles and winkles and ate them dripping in vinegar with a pin to get them out. Mum bought wet fish to cook for us or head and tails for the cats.

Another colourful character was the carpet salesman, with samples of beautiful Indian carpets. They were also at very exotic prices. While the knife sharpener had a bike to ride that also ran the knife grinder, sparks flying as he sharpened all the knives and scissors ‘while you wait’. The vacuum cleaner salesman became a pest with his small piles of dirt deposited on the carpet to demonstrate how much suction the machine had. Lots of women bought them though, eager to be seen as modern.

But times changed, all the services got less and less, it was soon self service in the supermarkets. Tupperware was something the housewife could sell and make money, so she became the door knocker, as did the Avon lady. Women were out there making their living from home. Others followed with clothes parties, wig parties and naughty underwear too. That sinking feeling occurred more often as we knew if we went along we would end up buying something, even when we said “I’m just going to look this time”. One glass of cheap wine and a piece of cheese on a stick and I was lost.

Now all we get at the door are salesmen trying to convince us to change electricity suppliers! It’s not the same somehow.

Do you remember the door-to-door sales and traders who used to come to your house? What did you purchase that you mightn’t have wanted?