Diamonds are forever: Looking back on 60 years of marriage 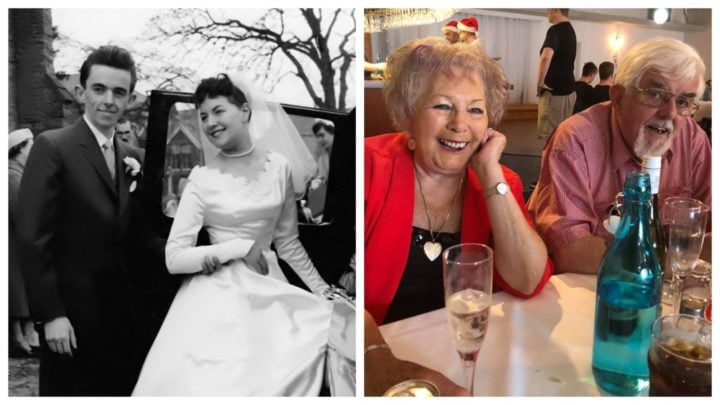 My husband, Brian, and I were married in a lovely old church in Downend, Bristol in the United Kingdom on January 31 1959. Being married 60 years is a milestone I never thought I would reach, after all when you are 19 and starting out together it is a sort of dream. For us it meant the five week trip to New Zealand; leaving England and settling in Auckland. Three countries and a few hundred dramas later here we are.

Every 10 years I was like a creature leaving its skin and starting again. The first 10 years were tough, but we were happy in Auckland, even when we had to deal with me having eight weeks in hospital after having contracted tuberculosis while nursing. We had a new house, a small budget, and two children within 18 months of each other. All the things we had to contend with we did alone; not even telling our parents of our problems. After all a long distance and a certain pride meant we coped, even when it was hard. Brian made furniture, standing lamps, a bed, and we had a lot of ‘hand me downs’; I used a second-hand cot and pram. Kerry once slept in a suitcase when we went on holiday to Russell, so it’s fair to say our children were resilient.

Our early years were difficult due to family problems and the health of our aged parents. We reluctantly returned to England, which also meant we had no job, no home, no washing machine and soon three children under three and a half. Life was a battle until about the end of the 10-year mark. Then it changed when we moved to a small house in a village; we loved the place and Brian had his own company he was trying to grow. Life was good, and there were parties and fun times too.

During our next 10 years, I often thought I was having the teenage years I felt I missed out on. There was music and fun, and with babysitters for the small family, it meant we could go out now and then. It was 1969, the hippy era. We had lots of friends in the village and our children attended the village school a short walk from our house. We were surrounded by beautiful countryside and streams to play in. We had a loyal dog called Grotty and were starting to make good money. I worked spasmodically doing night nursing, waitressing, being a barmaid, all of which was to help our budget. I only worked if Brian could care for the children and waited until they were all at school before working lunchtimes at an hotel.

So it went; on we progressed changing each 10 years. I became stronger as time passed; I realised I could achieve things alone. I wrote short stories and started painting again. At 40, I went on holiday for my birthday with a friend and she and I look back and laugh about it still. A week in Menorca, an island in the Mediterranean Sea near Spain; sunshine and wine, and lots of wonderful memories.

At 47 I began training as an assistant to an occupational therapist. I took the exam and passed with good marks. Then life took a sharp turn again.

When our family left the UK to live in other countries or with other people, we had a beautiful apartment in the centre of Bath. Restless as usual, we decided to try our luck in Australia; I was 48 and Brian was 52. It was a huge change settling in a new country. We both found work immediately, and our sons were already settled and working in Melbourne. I like to think we adapt well to new situations. I drank in the culture and new lifestyle, I loved the laconic humour and the ‘Australianisms’. I worked well, first in a Jewish centre for the elderly and then in day hospitals running a dementia group. I enjoyed my life.

As a couple, Brian and I fight like any other, at our ages, we also have to deal with illness and a distinct lack of cash. This caused trouble when our parents became frail, and all sorts of other disasters, but we managed and we dealt with it. I think our strength comes from our background. We were brought up to be strong, our parents and family were a great example. I was also taught to see the funny side of life, given resilience and knew that life was not a bowl of cherries, but that it could be a nest of vipers instead. We go onward to the next decade, we will see what that throws at us! I’ll be 80 in June and Brian will be 84 this year, so we know we are not here forever. We grab the good days and enjoy all the experiences we can.

Are you celebrating a special milestone in your marriage or relationship? What changes have you made over the years as your relationship grows?