‘My sadness at seeing the historic Notre Dame gutted by flames’ 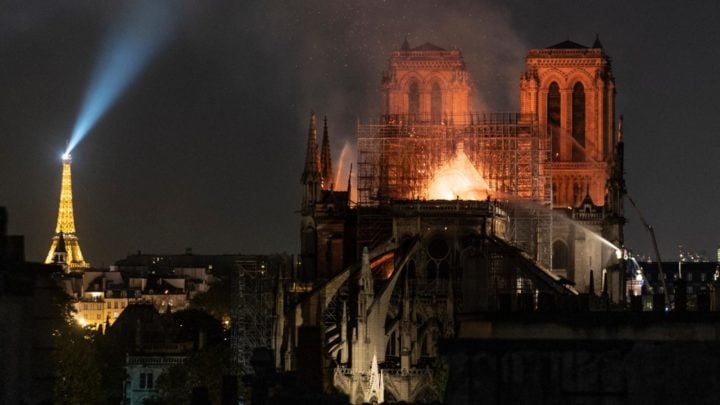 Smoke and flames rise from Notre-Dame Cathedral in Paris, France. A fire broke out on Monday afternoon and quickly spread across the building, collapsing the spire. The cause is yet unknown but officials said it was possibly linked to ongoing renovation work. Source: Veronique de Viguerie/Getty Images

Sadly, in the Southern Hemisphere, April 16, 2019 will now be one of those days that I’ll know, the day that Notre Dame in Paris burned down. I will be able to recall, for the rest of my life, where I was, what I was doing and how I felt. It will be a day fixed in my memory, like the destruction of the World Trade Centre in New York, the assassination of President John F Kennedy in Dallas and the dropping of the first atomic bomb on Japan. All remembered for different reasons, but fixed there just the same, truly iconic occurrences that will all live on in history.

I’m not a religious person, but I’m fully aware of the immense part Notre Dame has played in the faith and history of France. It was built in the 13th century, a survivor of the French Revolution and two World Wars, as well as the setting for a famous work of fiction The Hunchback of Notre Dame, a story of such power that many believe it to be the record of an actual occurrence, which of course, it is not.

However, the value of this great church goes well beyond its long and interesting history. It is, or rather was, after the unfortunate events of April 16, a repository of a massive collection of artworks and writings, quite apart from its importance as a great example of 13th century architecture and building skill. Even as the fire was burning, brave foremen and others were working in the parts of the building they could get to, frantically removing as many of the paintings, tapestries and documents as they could, and apparently it is hoped that vaults deep in the ground, under the conflagration, where much more valuable material was stored may, due to their position, have escaped damage also. I just hope the vast amounts of water being used on the fire haven’t got down there and done damage of its own!

Notre Dame has always been considered to represent the absolute centre of France, metaphorically, religiously and physically. I recall reading somewhere that it is considered by many Catholics to be second only to the Vatican in importance to that religion, which must make it an even sadder loss to those people. Physically, there is even a small bronze plaque set into the pavement just outside the main doors, with a dot etched right in the middle of it. That dot is supposed to be the very point from which all road measurements in France are taken. See a sign post in Bordeaux pointing to Paris – it says 585 kilometres, the distance to that little dot!

The last time my wife, Jacqui, and I were in Paris, in 1984 – a trip to celebrate our 25th wedding anniversary – we went on a tour of Notre Dame, something I am now very glad we did, because there obviously isn’t going to be another chance for some time to come, if ever! It was a wonderful experience, not just in the main hall of the church, but we were taken to what one might call all the ‘private’ places, along tiny passages, high up near the roof, looking down a frightening distance to the nave below, then to the belfry with its balcony looking out over the church yard – the balcony from which the hunchback was reputed to have thrown himself, in his anguish! Finally we went out onto the actual roof of the building, with its large slate tiles (at least, I think they were slate) and the wonderful gargoyles there, just as beautifully carved as any of the stonework down at ground level, but none of them visible to the congregation, only the establishment of the church, until the past few years when tourists like Jacqui and I were allowed up there to see them.

I‘m sure we feel a slight added sorrow at the loss of this great building, just like the millions of other visitors like us, who experienced the majesty and beauty of the place, only to see it now destroyed in a few, simple hours. I hope that what is left of the structure can be saved.

Had you visited Paris’s Notre Dame Cathedral? How did you feel seeing one of the world’s great treasures lost?