‘My brief encounter with a homeless man at a train station’ 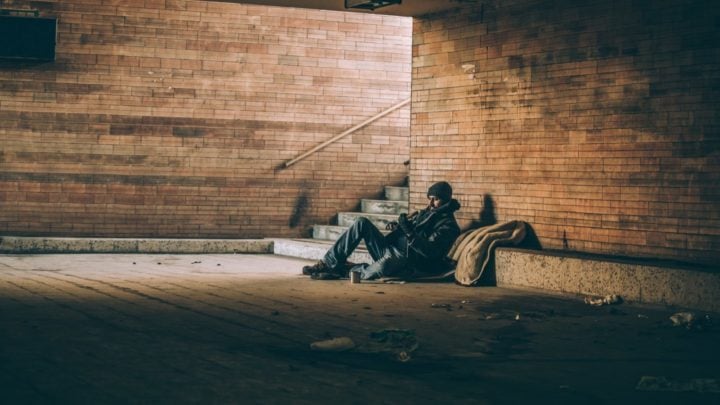 Peter stopped to have a chat to a homeless man at a train station recently and the interaction was interesting. Source: Stock Photo/Getty Images

I had just got off the train at Sutherland station. A down-at-heel man of about 45 called out to his similarly clad friend, sitting on a blue wooden-slatted seat. He headed to the door from which I had stepped down.

He half turned, and waved to his mate, who replied with: “See you later brother.”

The train doors sliced together, the guard in the middle carriage did his usual signal and the train moved southward, toward where I had come from earlier that morning.

As I walked by the man, he began putting on some old blue gloves.

“You’ll need those in this weather,” I remarked, as he fitted the second glove. It looked as though it had come from a Vinnies store.

He looked up at me, as if surprised that anyone would stop and talk to him at all. He smiled an almost toothless smile. “Yeah, my whole body is racked with arthritis.”

I backtracked and sat next to him.

“I used to be a paramedic,” he confided.

Though nothing surprises me about people from Struggle Street any more, I looked at him and said: “Prove it.”

He saw it as a challenge.

“I don’t have to prove nothin’ to nobody.”

I resisted the temptation to rail with him about the double negative. He turned his head, as if that was the end of our brief conversation. I persisted.

“Give me some medical term that shows me that you might have been a medical man.”

There was a pause, as if he were mentally skimming through a medical dictionary.

“All right,” he challenged. “What’s a cardio-myopothic infarction?”

I’d heard the term before. My doctor and I are on a first name basis.

He looked surprised. I was tempted to reply with “intracranial hydrocephalus”. Water on the brain, is what they call it. Comes from a tap on the head, according to my book of riddles.

“I don’t have to prove nothin’,” he said. “Me and my Remington will prove everything.”

I also knew what a Remington was.

“What calibre?” I asked.

He didn’t answer. This was bravado. Designed to shock me. I was not impressed.

I broke the silence. “You know, you can get yourself into a heap of trouble with the police if you think you can solve your problems with a gun.”

(I had in my mind the recent siege at the Lindt cafe in Sydney. Two beautiful people dead for absolutely no gain at all. All those flowers and tears.)

He looked at me and gave another toothless grin.

“Doesn’t matter,” he said. “I know where all the police live.”

At this point I knew I was sitting next to a crazy. Should I get up and run? Or was he pulling my leg?

As fate would have it, his train pulled in at that very moment. He stood, gathered his meagre possessions into two large plastic bags and announced; “I’ll only say just one thing. You’ve been talking to a bum.”

He walked to the doors of the train as they sliced open. I called out after him, “No, a philosopher.”

He turned, half-grinned and entered the train. I stood myself and headed for my cafe. Lunch with Stuart.

Have you ever been homeless? Have you stopped to talk to someone who is homeless on the street?