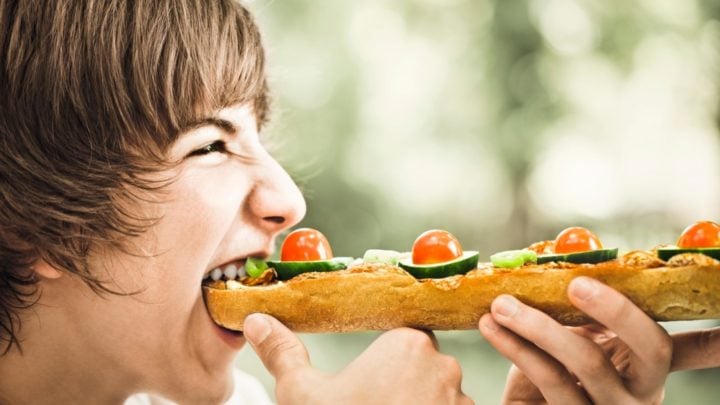 The boys went through so much food, Jennifer needed to restock the fridge on several occasions. Source: Getty Images

A day in the life of my 18-year-old grandson is very much different to when my own boys were 18. When my own three were 18, they had all moved out of home to either work or go to university. They did their own washing, helped with the housework and took turns cooking the evening meal any time they came home. They had been doing these chores since they turned 12. They are now in their mid-30s and still do so whenever they come to visit.

Recently, I was looking after my two grandsons, aged 14 and 18, while their parents had a well-earned rest, a holiday. I love these boys dearly, but their daily routine, especially the 18-year-old, left a bit to be desired.

Granted, he got himself out of bed each morning without any help from me. He’d spend half an hour under the shower (how could showering take so long?) before getting dressed. Then he’d take another 30 minutes combing, gelling, moussing and styling his hair and god knows what else.

He made his own breakfast, which was an entire bowl of porridge, four eggs on toast and a litre-sized mug of protein shake! He tells me it is for building muscle. I would have thought the mega bowl of porridge and the four eggs would have been sufficient for that. Mind you, he is very slim and not overly tall, perhaps he does need such a breakfast to build him up, who am I to think otherwise.

Of course the kitchen looked like a tornado has passed through when he finished his breakfast. No amount of encouraging saw him clean up after himself. That was not an option according to the lad.

Whilst this was happening, and in amongst the tornado-style mess from 18-year-old, I prepared the 14-year-old’s breakfast because he didn’t know how to even turn the toaster on, let alone place a slice of bread in it. Thankfully his breakfast was a bit more normal. One package of Up and Go and two pieces of toast with peanut butter. When I suggested I could teach him how to make toast a look of sheer horror came over his face. He assured me he would be “right” not knowing this simple task.

They both went to school after a bit of banter about what clothing would need to be washed that day.

Talking about clothing. Oh my goodness! The 18-year-old dumped at least four changes in the laundry every day. There was the school uniform. The after school clothes, gym clothes, after gym clothes, going out socialising clothes and pyjamas. A look of disbelief on the little cherub’s face when I suggested he could possibly wear some clothes again without washing them as he had only had them on for a couple of hours. Oh no, that would never do.

I asked if he would like me to show him how to use the washing machine, he told me he doesn’t have time to learn, he had to rush off to the gym, after more protein drinks of course. These ones were different, he said, as they are specifically for pre-gym. The powder all looked the same to me.

I had to add that before each clothing change he went through the hourly shower and preening routine plus a quick mega bowl of porridge and another protein shake and any leftover meat in the fridge. I estimated he eats at least five meals a day, the last one around midnight when he cooked several chicken breasts for when the munchies struck.

I cooked an enormous quantity of dinner for the boys. Most of it consumed at the table, very rarely a crumb left. There were definitely no scraps left for the dogs. I suppose it was good that there was no wastage, but I couldn’t believe how anyone could eat so much.

My daughter left me $600 to buy more food. That amount would keep me and several others overfed for more than a month I told her.

Are you the parent of a hungry boy? What did you do to keep the budget down when feeding your family?