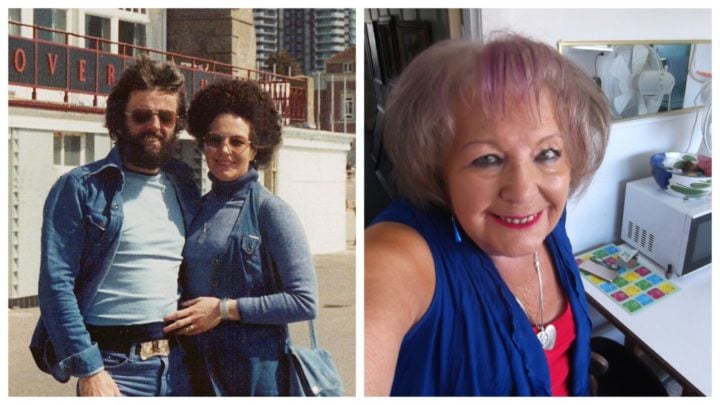 From a freshly married 20-year-old to a feisty and fierce 80-year-old, Jacqui looks back on her life. Source: Jacqui Lee

I remember it well … I was 20 and was celebrating my birthday in a hospital in Auckland, New Zealand. My husband, Brian, and I had been in New Zealand just a scant three months. We had married in the United Kingdom then sailed to our new home on the Rangitoto.

Fate dealt the sort of blows it is prone to do and I had a sudden decline in health. I was belatedly diagnosed with tuberculosis after trying to cope with the worrying symptoms for a while. As a nurse at a large mental hospital in Bristol, the contact with patients who had tuberculosis had seen me infected. I was nursed in an ‘open air’ ward on the top floor.

Here I was in Auckland with more treatment to endure. I took huge pills I called ‘flying saucers’ and had daily injections to get me well. The sister, who was a bit of dragon usually, was suddenly soft and gentle and came in with a cake bright with candles. I had a happy day with the friends from all over the world, Liga from Latvia was a special friend, we all had tuberculosis.

I received a parcel from England with fashionable clothes from my dearest mother, who was ignorant about my condition. I kept it a secret for a few years after too, only telling her when I was able to sit with her and reassure her I was okay. I spent eight weeks in hospital and it took me five years to tell her about it.

My 30th birthday was very different! By then I had three children and lived in a Wiltshire village in England. I was part of a busy and fun social scene, wearing the shortest of skirts and going to parties in the village. They were heady and wild years.

In 1969, straight-laced Britain had became known for its rock groups and outlandish clothes, shared with the world. I embraced it wholeheartedly having just spent five years pushing a pram. My need for a little break was foremost. I used to get a friend to bring me back Biba make-up from London, and I bought fringed jackets at country house sales, or went to rummage sales to find shawls and beads.

My children were almost all at school. I started to work again, mostly in hotels, shops and at a hospital as a night nurse. We slowly regained a life, as my husband was also doing well in his own graphic design business. Our children were aged nine, seven and five. We weren’t rich, but we both worked hard and loved our little country home. The children had the best early childhood, running free, paddling in streams and walking to the village school.

By the time I was 40 it was 1979. We lived in Trowbridge, Wiltshire and we had gone up the ladder a little more. We had a super house we called our “‘upside down house’ with three bedrooms, a bathroom and a large area down on the ground floor, and a lounge, dining room kitchen bathroom and an extra bedroom in a roof space. The garden had a built-in barbecue and a big fish pond. It was heaven.

I was so happy and loved the house. This became my ‘Shirley Valentine’ birthday. I had a chance to go to Menorca, Spain with a friend. It was a dream for me, long dusty tracks leading to the villa, a cave where they had a disco, beautiful friendly bars in the town, fabulous clothes. My friend, Anne, and I had a fun time, just giggling, eating out and doing our nails. Sunbaking was a full-time pastime too. We share those memories often, even though it was so long ago and we live on different continents.

My children were in their teens – 19, 17 and 15. They tried helping around the house in my absence, but Brian said when I got back: “I had no idea how much there was to do.” He was not keen on letting me go away again. I worked in a chemist’s shop and for a trendy bar and restaurant at that time.

Turning 50 saw me do another huge lead, when we migrated to Australia in 1987. We’d settled in an older house in Patterson Lakes outside of Melbourne by 1989. Our sons also lived in Australia and both had good jobs. Our beautiful daughter and husband remained in England. We had a mortgage that cost us more than 17 per cent. It was necessary for us both to work.

We had new friends, new jobs, and a new life. I spent an early birthday celebration with our older son’s almost ‘new’ family — he was about to marry a Hungarian girl. His mother-in-law and I were both 50 that year and celebrated with a great joint party. We had a wonderful time. Hungarians were great hosts and the dancing and food were superb.

The only sad thing I recall was that our youngest son had his tonsils out that week — he was 25 — and as an adult it wasn’t nice to go through it. He had a bleed and we had to rush him back to hospital. He got well again.

I was working as an assistant doing activities in a nursing home. Brian was working for a graphics agency. We had a good lifestyle, but found it harder to make friends in the suburbs.

Life had gone pear-shaped by the time I turned 60. Work had become a difficult place for Brian (he had a boss who bullied him) and he was struggling to stay on until his retirement. However, when his health started to suffer we knew it was time to throw in the towel. We sold everything and moved into our caravan, which was located at Port Albert in Gippsland.

We were struggling. We had very little cash, had got rid of most of our possessions and found adjusting to this new lifestyle hard. We loved the town of Yarram though and got sucked into it. We joined Lions Club, I worked for the health service, Brian became a shire councillor and we volunteered for many organisations. We even cleaned the local school, it was a hard working life, but we found great friends to help make it all bearable.

I was fit at 60, cycling to and from my clients when I did home care work.

In the next 10 years I completed two TAFE courses in personal care and dementia specific nursing. I began my training at 64 years of age. I loved the jobs and I worked until I was nearly 70.

Our finances were still shaky – we moved into a rental property. Making ends meet was a continual challenge. Every week was a battle.

Both Brian and I enjoy writing and painting. Occasionally we would win something for our words or sell a painting. It eased the pressure a bit.

We also found living in the country made a huge difference to our wellbeing. We revelled in other people’s kindness and support and made great friends along the way.

I celebrated my 80th birthday earlier this year. It was certainly memorable (and I’ve written about it previously)! Having planned to spend time with close friends and a few family members, everything was thrown into chaos when Brian became ill. He’d collapsed in an ambulance and was admitted to hospital. It was revealed he had a bust appendix, his condition was so serious it could have killed him.

Three months later Brian continues with his recovery. It was a harrowing time, certainly not a birthday I’ll forget any time soon. It does make me wonder if I’ll make it to the next milestone. Turning 90 seems a long way off right now …

What stands out for you when you look back at your life in stages?