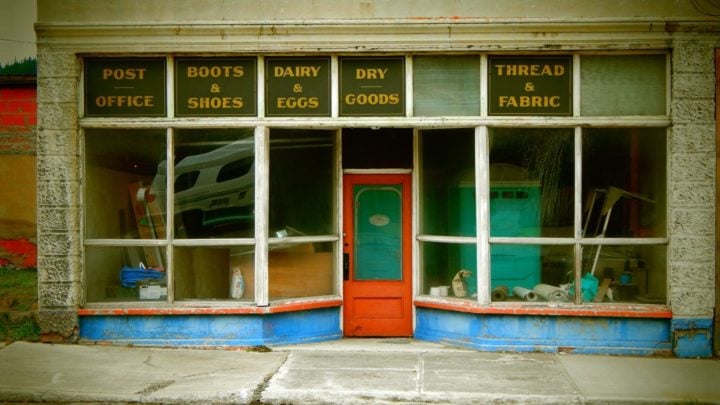 Going out of business: That's the fate of many small businesses in regional towns across Australia according to this community writer. Source: Getty Images

Things are looking a little sad at the moment in the street where I live. It also happens to be the main street of town, where all the shops and most other businesses are situated.

Like many other small towns I guess, we have quite a few empty shops along the row, two hardware stores are gone (one still remains), two butchers are no longer there and two bank branches have shut up shop as well.

Even our local newsagent is having a fairly hard time of it, having to dream up new stock ideas, because people just aren’t buying a lot of newspapers, magazines or books these days. They now get most of that stuff online and they get quite a lot of it free there too!

I don’t think it’s just the newsagent that is suffering for this reason either. The internet gave us a grand new world, free of paper, much faster in operation and everything at a much cheaper price! The word ‘utopia’ has often been mentioned, and of course, we all got sucked into it, one of the great cons in the history of civilisation.

First, we were told it would ‘save energy’ but with a computer in virtually every home, we burn more of the stuff now than we did before when most things were done by hand. Then it was said we’d become members of a ‘paperless society’, but most people still print most of their work, once it’s been completed; office filing cabinets are at least as full as they were before; even children, the natural successors to the world of the computer, prefer to do drawings on pieces of paper; and the one thing the computer simply cannot compete with is toilet paper, now made fancier, stronger and softer almost every week. Certainly not lessening its use!

Before computers and the internet, a person could manage his private business at home (paying bills, writing letters or doing the household accounts), on a simple little desk with a typewriter and perhaps a telephone on it, but little else, apart from that ever-present pile of bills, that never seems to get smaller. For some reason, now we need larger desks to accommodate our computers and laptops, plus keyboards, printers and scanners, and even a speaker system. That’s just the basics! I’ve seen the set-ups of some real computer ‘nerds’ …

And have you tried to do business by telephone lately? The company, virtually any company, operates while hiding behind their personal bodyguard, the computer. It can take you 30-plus minutes just to speak with a real human, often only to find it’s the wrong human. Then when and if you do get the right person, they take down a few notes (on their computer) and tell you they’ll get back to you in three days (but they rarely do!).

In the old days, you’d chat briefly with some cheerful bloke, who would say “Hold on a minute” and you’d hear him walk away, to return within the promised minute, to give you the information you asked for. Tell me again that the internet and computers were supposed to make things quicker and more efficient.

But back to my street where the shops and businesses are trying to carry on, looking after customers (many of whom have become personal friends). They have to accept payment by credit card, for which they’ll pay a fee to the bank (in addition to the one their customer will pay), wait for stock to arrive — late, as usual, and fight to hold onto their customers against frighteningly cheap competition from overseas operators online.

It’s little wonder so many businesses are doing it tough. What sort of chance do they have against all that? We were promised a level playing field 10 or so years ago, but where is it now?

Do you shop online or prefer face-to-face interactions? Have you noticed local businesses closing in your area?