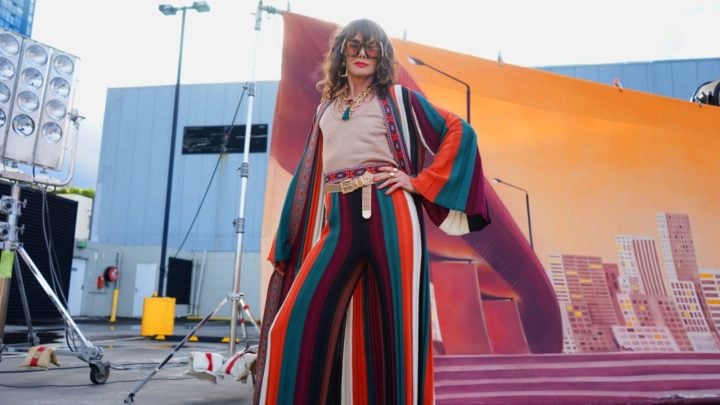 Sheree is hoping to change the perception of over-60s in the media through her involvement with Westfield and the Sydney Dance Co. Source: Sheree da Costa

My whole career has been as a performer, initially as a professional dancer with both Sydney Dance Company and The Australian Ballet (where I was a principal dancer) and later performing in musicals and as an actress on television and in films. I retired as a dancer at the age of 45, which allowed me to focus solely on acting, or so I thought … The past 12 months have been quite interesting for this 60-something performer.

Most recently I became involved in a major advertising campaign for Westfield. Having declared spring the season of ‘Revival’, it says everything old is cool again.

Like most television ads, there is an audition process and depending on the ad, the brief that goes out to the casting directors changes according to age, ethnicity, look etc. Because I am of ‘a certain age’ I find myself mostly auditioning for grannies, retirees, funeral insurance … I’m sure you get the picture!

I’m a very active 60-something, so I long for (and rarely am ever given) the chance to audition for older women who dance/surf/ski/horse ride/go to gym. I partake in all of these things, as do many of my friends, but more often than not we’re seen as the gardening granny who drinks tea, whilst organising pre-payment for funeral insurance.

Now don’t get me wrong, because those roles are totally relevant, I do all of those things too (perhaps not the organising of my own funeral!), but I do feel that we are capable of so much more.

Therefore, when the brief came through from my agent for an older woman of 60-plus to dance in an advertisement with 15 of the best hip hop dancers in Sydney, I was intrigued. The initial audition involved learning 16 bars of choreography from a funky dance video and then performing said routine for the casting director, alongside dancers as young as eight years old. I’m sure you can imagine how daunting that was! These dancers were seriously amazing. Luckily for me, I’m currently in dance training mode at the moment. Let me explain …

Out of the blue last August, I was asked to return as a guest artist to the Sydney Dance Co for their 50th Anniversary Season 2, November 2019 at the Roslyn Packer Theatre, hence since October 2018 I’ve been attending ballet classes. I was in the unique position of being reasonably dance fit, which wouldn’t have been the case without the Sydney Dance Co season looming over my head.

However, hip hop has never been a style that I’ve mastered and added to that the choreography was fast, with a zillion moves to every beat. In the second audition our choreographer Leah Howard really put us through our paces, asking us to freestyle (instant panic attack on my part), do whatever tricks we had (tricks in my case meant not breaking a hip!) and to ‘please really bring it’, in other words impress her with everything we had.

There I am in the middle of all these incredible dancers who are spinning on their heads, turning their bodies into pretzels and making it look like it was the most natural thing in the whole world. “Holy hell,” I thought. “What on earth have I got myself into!” But to my utter amazement I got the gig!

Following two full days of dance rehearsals, we were on the film set feeling like a million dollars, wearing the most amazing outfits from the various designers who have presence at Westfield. What an experience!

There is a big shift towards diversity in casting these days for film, television and stage, which has been wonderful to see, but in the case of the Westfield commercial we represented the epitome of diversity and revival. In this cast of 16 dancers we had cultural/LGBTQ+/age representation across the board, it really was so rewarding to be involved in the Westfield Spring Revival advertising campaign that completely embraced diversity

From a fashion point of view, I was delighted to be wearing and outfit by the designer Camilla. It comprised every colour of the rainbow. No dull granny clothes on this shoot, I can tell you! This served to remind me that just because we’re from the older generation, we don’t necessarily need to ‘dress according to our age’. There are more choices than ever from Australian designers acknowledging our fashion relevance, which is so refreshing!

At our age it’s easy to lose confidence, both physically and mentally. Being part of the Westfield Spring Revival campaign encouraged me to stand tall and be proud of my age and my generation and to celebrate my own personal revival as a dancer. I’m feeling renewed, as my guest appearance with Sydney Dance Co creeps ever closer.

What stereotypes of older people are you tired of seeing? How would you like the media to change its representation of over-60s?