‘I can’t help but feel lost in this digital world’ 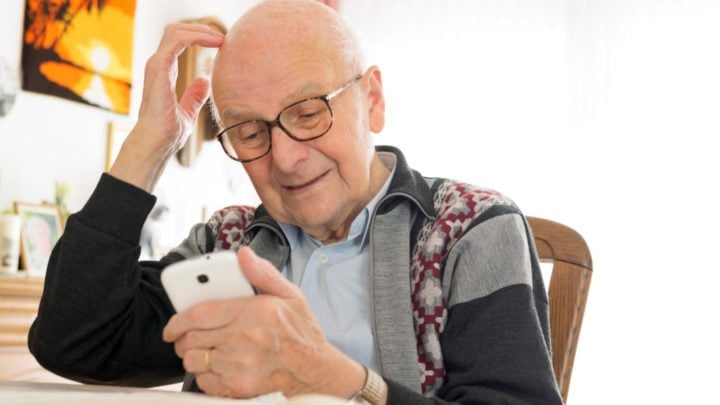 Society surges ahead with technology, but this writer can only marvel at the developments. (Photograph posed by model.) Source: Getty Images

I really wish I knew how some of the modern pieces of magic we live with today worked! But I don’t suppose I ever shall — I found it hard, when I was young, to figure out how a craftsman building a watch, could cut the teeth on one of those tiny little cog-wheels you get inside them, and get the right number of teeth too, so a microSD card is way, way, way out of my league. How can a tiny little object like that, no larger than the finger-nail on my fifth finger, carry the information for thousands of photographs, in beautiful high-definition, and in full colour — all those tiny details and subtle colour tints, are all faithfully caught? It’s magic as far as I’m concerned!

Forget about saving all those pictures (or whatever else you want to save), what about printing them? My HP printer has four comparatively small bottles of ink inside, one magenta, one cyan, one yellow and one black, and I’m told there is some sort of tiny heating element on the ‘spout’, of each colour ink, which is capable of instantly boiling a minute speck of the ink and spitting it onto the surface of a piece of paper. Not only does it do that, at high speed I might add, but it does the same to the other three ink bottles at the same time, with the resulting picture on the paper being an accurate colour rendition of the original subject. How on earth does the printer know the exact amount of each colour to grab, boil and spit, over and over again, thousands of times a second it seems, onto the paper? It also does all this while shooting across the paper at high speed, apparently creating bands of colour, which exactly match up to the previous band that was laid down about half a second before. Then, to cap all this, by the time the printed sheet of paper hurtles out of the machine, all the moisture has been dried out of the ink and you can touch it pretty well immediately! As I said, it’s way, way beyond me!

Next in line is the camera, another of the wonders of the modern world. As an old man, I am more familiar with old-fashioned cameras myself, little boxes that have a sheet of silver-coated film inside, sensitised by the addition of light, changing the quality of the coating. It then has to be put in chemicals to darken and harden the silver, resulting in a negative image, which is then exposed to light again, this time onto sensitised paper, and the result is a photograph! Surprisingly, I can understand this system — it’s not too overpowering for my simple brain to grasp, and it is in fact something I did both professionally and as a hobby for many years. All the above processes needed to be done in a darkroom, under nothing brighter than a very dim red light. Colour pictures were a little more difficult — unless you had the right equipment you had to send your photo away to a laboratory to be processed, which could take a week or more before you knew if your efforts had been successful.

It’s all different now! The invention of the digital camera changed every stage of photograph taking, with the film being replaced by electronic wizardry, resulting in no film, no negative images, no dark room and no waiting for up to a week to find out that your masterpiece was in fact, a picture of the back of your thumb! Now everything is instant — you can check the shot you just took by looking at a small screen on the back of the camera — if it isn’t good enough, who cares; take it again and hopefully it will be alright next time. Finally, take your digital camera home, download the photos you took and hey presto, you can print them straight away, or you can even retouch them as well, should they require a little help.

As I said, it’s all way beyond me, I just thank goodness it’s happened and get on with the work. In the meantime, can anyone expand on my limited knowledge of micro-cards, ink-jet printers or digital cameras? I’d love to know more!

Is there a piece of technology you are forever grappling with? What piece of new technology have you embraced?