‘How resurrecting Sunday family dinners spared me the strain of retirement’ 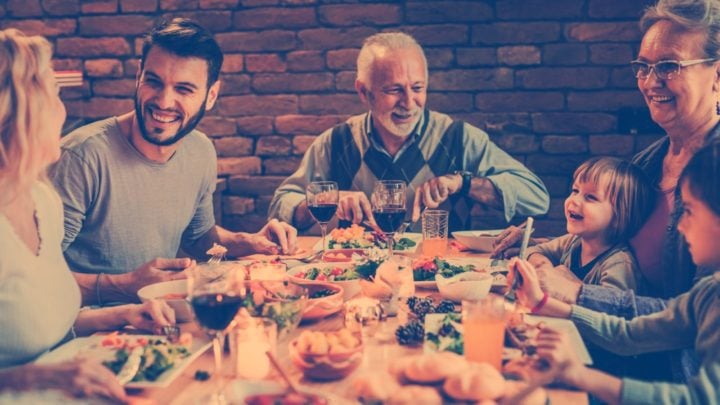 One of the hazards of retirement, I find, is not knowing one day from the next. By this I don’t mean my general mental state, which has been commented on by a number of helpful people, most notably by the long-suffering Grace, my wife. But, seriously, it’s a problem.

When one had a real job — not one of these flashes in the pan in the so-called ‘gig’ economy — you knew that from Monday to Friday you had to be there in your allotted seat (this was before ‘hot desking’, of course) and you ploughed through what was in front of you, systematically, until 5pm on Friday afternoon.

That’s when your own sense of yourself as a unique individual could emerge — limited to about 36 hours to fit into the tightly rationed program that life back then was for most of us. Moreover, if you came from a traditional Australian family in a traditional Aussie suburb or town, your reward for submitting to this ritual was the slap-up Sunday dinner (lamb, beef or chicken, with three veg), which crowned the efforts of the previous week while setting you up for a return to the treadmill the following day. Because we all understood, without even being warned, that when you were denied that self-imposed discipline of advanced civilisation, anything dark or reprehensible may be the consequence.

But we humans are nothing if not creatures of habit and it was shortly after I accepted the golden handshake that all the milestones and signposts of a functioning week began to re-appear: garbage night on Sundays, EPL football on Saturday nights and Sunday mornings, cricket from Lord’s at 3am, municipal library on Wednesdays and Thursdays.

Except that it wasn’t functioning at all because when Grace decided that library on Tuesday and Wednesday suited her better one week, chaos ensued. Most notably in this writer losing all sense of a structured existence when changing the litter tray of the psychotic cat on Tuesday instead of midday Thursday, thus throwing out the whole zeitgeist of the family. Oh my goodness the ructions! And God help us if it had been a long-awaited, life-saving medical procedure that was torpedoed and not a pile of second-hand crystals destined for the bin.

Allow me a digression. As a child of the ’60s who had left behind the suffocating anglophile ’50s on leaving high school, I was utterly enamoured with all things American. The slick movies, the irreverent rock ‘n’ roll, the outlandish tough-guy lingo, JFK the god himself, the musical Hair, even the crooked politics which seemed so, well, romantic, a fantasy reinforced by my ploughing through Theodore H. White’s ground-breaking Making of the President series.

Thus, when my foot first made landfall on Manhattan Island I thought I had landed in heaven, with this wide-eyed tourist from the South Pacific being the perfect blank canvas waiting to be filled by the splashy colour that assailed you everywhere, at any hour. Sam Goody’s Folkways record store, the East Village other music spot, Washington Square, the Village Voice newspaper, Peter Max’s psychedelic livery on the city buses — I soaked it all up. Uncritically.

I even found myself striding up Fifth Avenue as one tiny drop in a sea of 250,000 anti-Vietnam War protesters, not in any antipodean isolation, but as an honoured guest of the Brooklyn Jewish Choir. Now I don’t know how that happened since my surname is not Jewish but Huguenot French, but they loved me all the same, just for wearing my heart on my sleeve.

And I loved New York Jewish food — wave a blintz in front of me and only crumbs would be the evidence. Add some pastrami, pretzels, lox and bagels and the plate would be left brilliantly clean. To this day, I wish I’d kept the poster promoting ‘Levy’s Real Ryebread’ as a souvenir, seemingly plastered on every available space across the city. Featuring as it did the most freckled, Irish-looking NYPD cop sinking his fangs into a slab of Reuben sandwich, its caption “You don’t have to be Jewish to love Levy’s, etc.” was always graffiti-ed over with new words, either ‘a pig’ or ‘human’, to replace the scratched-out ‘Jewish’, making it an icon of ’60s underground culture.

Funnily enough, my Number Two son is also infatuated with New York, but his heroes are not Mickey Mantle or Jackson Pollock, but Spider-Man and Batman. It was he who came to our family’s rescue when all the old structures were cracking from the centrifugal strain of retirement, by resurrecting the Sunday family dinner as the accepted climax of each week’s activities. But with his own little twist.

Every Thursday he takes down one of his favourite books, New York, Capital of Food, from the dresser shelves and he and his mother sit down at the kitchen table to pore over the recipes and mouth-watering photography to work out what she, I might add, will prepare for the forthcoming Sunday repast. They are amazingly creative in what they have cobbled together from this one slender volume.

It isn’t my own mother’s shoulder of lamb, parsnips, mash and green beans, followed by baked custard with nutmeg topping, as a sort of antipasto, I guess, but I have no regrets about that. Because, while time has moved on, we can still be grateful to our Number Two son for saving the side by restoring a centrepiece of our own childhoods to centre stage in our contemporary lives — but with a good helping of modern-day chutzpah of which I am sure both Peter Parker and Bruce Wayne would approve.

Do you have a day when you and your family all have dinner together? Do you remember having family dinners with your parents growing up?