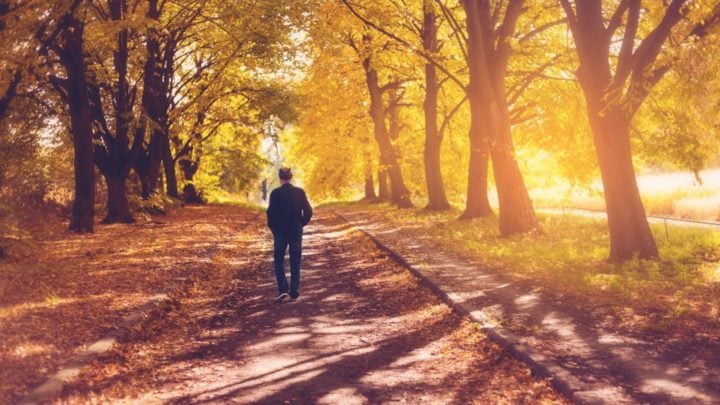 Getting out and going for a walk has been just one of the ways Jim has managed his mental health during Covid-19 lockdown. Source: Getty Images

From the chronicles of ‘a tired mind and a conversation with a friend …’. Well, I have to tell you, it’s only been about two weeks now since I’ve actually begun to feel more in control of things. I mean, mindfully, in control.

I made the decision to get out of the apartment as much as possible in the form of a walk. I’ve been successfully doing five out of seven days now! I hope to make it seven out of seven eventually.

I finally gathered up all of my empty pop bottles, cans and glass that I’ve been keeping in plastic bags since last December and turned them into the only open bottle return depot in my area. It’s a couple of miles or so away. Of course, the one that’s a block and a half from my place is closed due to the coronavirus outbreak. I got $20 in total and that’s about three times what I normally turn in.

I decided to move all of the electronic gear that came out of my junk room from my living room to my vehicle. My problem is I can’t get in touch with anybody that might take it! All of the locations here in Surrey, British Columbia are closed (you can guess why). A major electronic depot in Abbotsford won’t answer the phone.

My dust bunnies are still multiplying faster than I’d like. I think they do it at night when I can’t see the little buggers. The three projects that I laid out to see how much dust I could collect on them, between cleanings, are now indistinguishable from everything else that’s stationary in my apartment, so now my whole place needs a good cleaning.

Damn, too bad I fired the maid just before the pandemic! However, I did clean my oven the other day. Generally speaking, although I’m doing better, I still have to say there are bouts of depression creeping in. I recognise it because of a number of factors:

On the upside, I just finished my first virtual kinesiology workout. Six weeks since full isolation began, at least that’s coming back into play and he shows me no mercy.

My new career as a travel writer and photographer, which I’ve been preparing for over a year now, is suddenly curtailed. That’s something I have to wrap my head around in order to continue forward with that. Especially since my RV trip with some old school friends up the beautiful Cassiar Highway to Alaska and then back down the historic Alaska Highway to Prince George is now shelved for the duration.

I’m a little frustrated with it all, to say the least. Just have to wrap my head, like I said, around a pivot point for this new challenge. There are a lot of things that I once took for granted that are being hauled out from under me like a bad magician whipping a tablecloth out from under the dishes on a table … Only everything is breaking as he does it!

Between the personal aspects of dealing with the lack of income, physical illness and the state of my mental capacities, it’s a heck of a lot to handle! Couple that with all the noise on TV, radio and in the newspaper about coronavirus and sometimes I just want to turn it all off, curl up into a corner of my armchair with a big blanket, a good book and a stiff drink!

Nobody will blame me for that! We all have to revamp our concepts of what we ‘do’ versus who we ‘are’ and how we’re going to deal with this whole new environment. Everything is changing and it’s especially important that we roll with the punches. Normal isn’t going to be what it used to be.

In the meantime, meditate, go for a walk, clean one room, do a load of laundry, read a book, catch up with old friends using the technology on-hand and stay home, stay safe and remember; you’ve got this. Maybe not all at once, but you will eventually!

The tough part is figuring out the who, what, where, when and why of everything … and nobody said it was going to be easy.

What are you doing to care for your emotional and mental wellbeing? What tips do you have for others who might be struggling?