High Noon: A classic western film with a secret back story 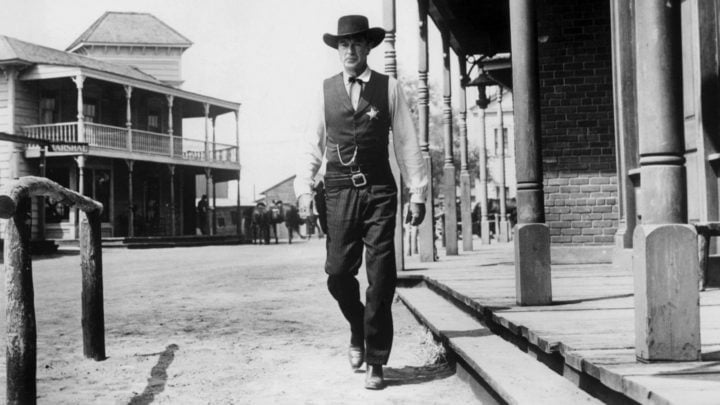 It would have been the Rugby World Cup that stirred the embers, I suppose, because whenever my attention came back into focus after another bout of daydreaming, I found I had been humming, whistling, even crooning ‘Do not forsake me, My Darling’, title song of the 1952 western High Noon. Now that’s a long bow to draw, I expect someone to remark, between the pastime of rugby and a country and western song. Not necessarily.

You see, the Sydney suburb of Lane Cove where I grew up is not only noted for its red-brick boxes and the neo-Renaissance splendour of St Ignatius’ College perched high above the river, it is also one of the great cradles of Australian rugby. For the local rugby club is a conscious decoration on a suburb that might otherwise sink into the ubiquity of the Sydney metro area.

As it happened, the year was 1962 and Lane Cove had a pretty good team, and I regard it as a feather in my cap to have played that season. Northern Sydney premiers, City of Sydney runners-up, we lost only twice (both narrowly) in a program of about 30 matches. But that’s neither here nor there; for what has been seeping up from the recesses of the past are not the games, the tries, the wins or the unexpected heartbreak, but the post-match ritual.

After every victory (before the keg was tapped), the speeches, exhortations and cheering was always followed, inexplicably, by a belted-out rendition of ‘Do not forsake me, My Darling’, not in the anaemic clip-clop tempo of the Tex Ritter sound-track version, but the full-bottle, operatic extravaganza of Chicago-born, Italo-American Frankie Laine’s chart-busting single.

It was no surprise then, when asked to select a DVD for us to watch one night recently, my hand was magnetically drawn to High Noon, sliding past such modern masterpieces as Room with a View, Mr Turner and Public Enemies. I don’t know how this DVD actually got into our collection, but it was a special production, re-released in 2002 to celebrate the 50th anniversary release of the movie.

It was not the first time I had seen High Noon, far from it, with each viewing confirming my first impression that it was a passable movie, although more in the later tradition of the psychological western (from Soldier Blue on) than the more familiar “bang, bang, you’re dead” stuff we used to emulate in school playgrounds right across the whole ‘civilised’ world.
Indeed, the internet tells me that when the movie was first shown, pre-release, to a Los Angeles audience to gauge its market potential, it was a flop because the crowd were so conditioned to the sclerotic forms of the genre that they were utterly mystified. And bored. Since then, of course, High Noon has been the subject of much revisionist thinking, since its production and release coincided with the worst excesses of Senator McCarthy’s tyranny and the House Un-American Activities Committee’s investigation into alleged communist penetration of Hollywood.

The lead part had first been offered to John (‘The Duke’) Wayne, a partisan of the Hollywood investigation, but he knocked it back, deeming the script to be “un-American”. It was then offered, unsuccessfully, to a string of box-office megastars, including Gregory Peck (who later described his own rejection of the role as the worst decision of his career), before it eventually landed with the ageing, ailing Gary Cooper. What a piece of unintended irony!

Twenty years older than the imagined character, United States Marshal Will Kane, Cooper brought to the role all the vulnerability and humanity that had produced such riveting performances in Sergeant York and For Whom the Bell Tolls. But in High Noon, I don’t think I have ever watched a more compelling rendition of personal fear struggling to hide behind a mask of sober duty.

Needless to say, Cooper won the best actor Oscar that year for his performance. And, ironically, his award was received, in his absence in Europe, by John Wayne. Watch Wayne’s acceptance speech on YouTube and it reveals so much by saying so little — not a word about Cooper’s acting, not syllable about the film — while The Duke still managed to inject himself into the frame.

The film was controversial in its time. The screenwriter, Carl Foreman (later the writer of The Bridge on the River Kwai) was himself about to be driven out by the Hollywood blacklist, and most subsequent analyses of the movie suggest that Foreman wrote the script as an allegory of his own recent experience before the House Un-American Activities Committee. Indeed, in a special feature attached to this 50th anniversary DVD, his son, Jonathan, confirmed as much.

While that is true, and it is disturbing that such madness as swept America in the early-’50s could only be expressed metaphorically (unlike later movies like Woody Allen’s The Front, Jim Carrey’s The Majestic and Bryan Cranston’s Trumbo), that was not what gripped my attention.

The real power of this movie lay in more chilling, universal themes, beyond the realm of Joe McCarthy and the Hollywood blacklist. It was merciless in its depiction of all the shades of human expediency as Marshal Kane’s erstwhile supporters, one by one, slid out the backdoor to avoid their moment of truth. From a young Harry Morgan (remember him as Colonel Potter in M*A*S*H) hiding behind his wife’s skirts, to Lon Chaney Jr, playing the world-weary mentor telling Cooper that maybe (the general populace) takes too long to be aroused by injustice or “maybe they don’t even care”. It was a shocking indictment of humankind’s failure to stand up when it matters, a condition that may be as relevant today as it was in 1952, or 1652.

Still, it was Gary Cooper’s movie, particularly the brilliant ending when he showed his contempt for the fair-weather friends clustered around him by patting only a 14-year-old boy on the back and dropping his marshal’s star into the dirt; saying nothing. The Duke, I’m sure, would have made a heroic speech and pinned the star (in righteous continuity) on the boy, instead.

Have you seen 'High Noon'? What are some of the great films of Hollywood's golden era in your view?