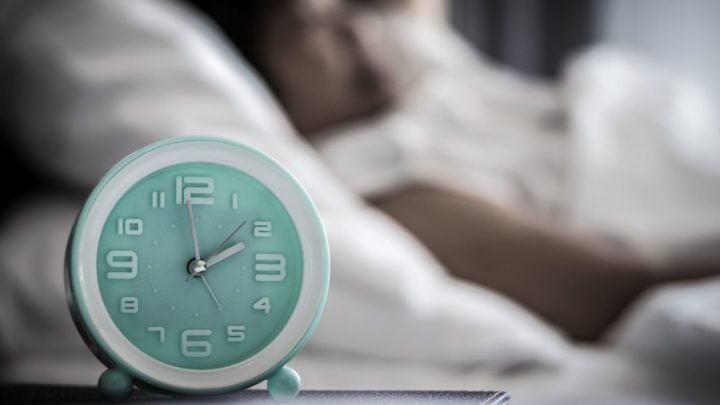 Robyn finds herself wide awake at 2am, after only a few hours' sleep. What can she do? Source: Getty Images

What do you do when you cannot sleep through an entire night? I have been having trouble sleeping. I snuggle down at around 10pm and go to sleep easily — then I wake up at 2am and cannot go back to sleep. I end up getting out of bed, making myself a cup of coffee or hot chocolate and going online until about 4:30am, when I have my breakfast.

This is now starting to become a problem and a regular occurrence, which is really messing with my head. What should I do? I already take medication to sleep and it’s enough to knock out a horse, so I’m at a loss to explain why I’m waking after four or five hours. It’s becoming quite a worry!

I used to sleep right through (maybe with one toilet break — ha!) but now I’m just sleeping for about four hours. This is a pattern I want to stop dead in its tracks.

I sometimes have to go to bed for a ‘nanna nap’ at 10am as I’m so tired from the lack of sleep.

I enjoy writing and often write when I can’t sleep. I even wrote this blog in the wee hours of the morning … But I don’t want it to become a regular thing.

This behaviour is new for me. It’s having an impact on my activities during the day. When I spoke to my doctor about it, it was suggested that perhaps I don’t need to sleep for the eight or nine hours that I used to sleep for, that my body has adjusted and is not in any danger. A plus, I suppose, though I honestly don’t like sleeping less!

Can anyone relate? Do you have trouble sleeping too?

A friend has said that she is experiencing the same issue I am and has invited me to contact her at any time of the day or night. As tempting as that might be, I’m not likely to call her at 3am for a chat. It’s not in my nature — I was brought up believing that one shouldn’t make a phone call before 9am or after 8pm. My mother drilled those hours into my head when I was a child, saying it wasn’t polite to interrupt people by phone unless it was an emergency. She’s been gone 35 years and she still has this hold over me … I still get a fright if the phone rings at home after 8pm.

I suppose I am a product of a strict upbringing. Everything has a place and everything in its place (I wouldn’t move anything unless I knew I could place it back exactly where it came from). I still work to those principles today. The obsessive behaviours I have at age 70 are a byproduct of my mother’s influence on me as a child. I worked that one out in therapy years ago!

I could just ‘go with the flow’ and sleep less, but it’s actually starting to get me down. Sure, I could write more and I’ve also considered taking up knitting again just to fill in the time …

Warm drinks don’t work on making me drowsy. I’ve tried having hot milk with honey. Another friend suggested wine, but I don’t want to end up like her, drinking at all hours! The thought of booze at 3am brings tears to my eyes.

I’m getting through the ironing, baking and writing in the middle of the night. Truth be told, I’m probably immune to the sleeping pills having taken them for so many years.

Do you have trouble falling asleep and/or staying asleep? What tips do you have to help with sleep issues?